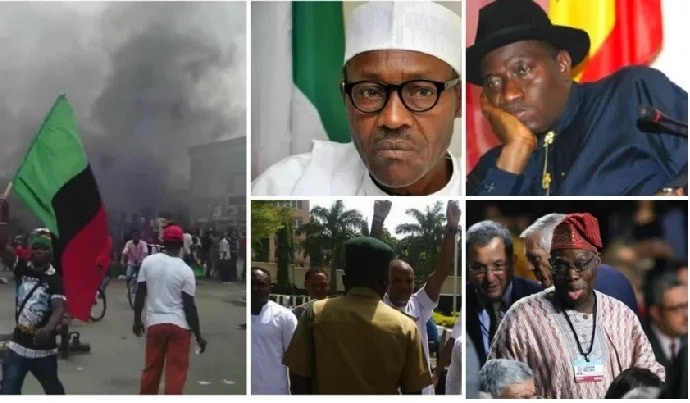 Former President Olusegun Obasanjo has called on the Federal Government to negotiate with those agitating for the creation of a Biafran republic out of the current set-up in Nigeria.

Obasanjo said this at an event, tagged ‘Memory and Nation Building: Biafra 50 years later’, which held in Abuja on Thursday.

The event was held to commemorate 50 years of the declaration of an independent state of Biafra by the late Dim Chukwuemeka Ojukwu on May 30, 1967.

Obasanjo as the Commander, Third Marine Commando Division, was the military officer who accepted the surrender of the Biafran forces on January 12, 1970, after three years of war.

However, the former President said the agitation for Biafra was like a woman complaining constantly about her marriage and threatening to file for a divorce against her husband.

Obasanjo said in such a situation, the husband must pet and “massage” his wife to make her feel loved.

“It is like a love affair. If in a house with a husband and a wife and the wife says ‘I am fed up, I am going’ and every day, that is the song you hear, you will soon get fed up yourself as the husband and you will say, ‘if you want to go, you can go’.

“But if there is any misunderstanding and you resolve it, and you find a solution, you will live together almost forever. I believe there is no substitute for holding Nigeria and massaging it as you massage love. There is no alternative and I will say we should even appeal.

Recalling his role in the Nigerian Civil War, Obasanjo said it was never the plan of the Nigerian government to exterminate the Igbo.

He explained that everything that the federal troops did was in a bid to unite the country.

Obasanjo added, “We had in our pocket the Geneva convention to guide us. In addition to that, we had a special code of conduct. Third, we had foreign observers. We had people who were like umpires.

“If it was a war to exterminate and we had no reconciliation in mind, what would foreign observers be doing? The foreign observers reported periodically and even had powers to investigate any allegation and they did.”

Also speaking at the event, acting President Yemi Osinbajo said Nigerians must continue to strive for the unity of the nation.

While delivering his speech, titled ‘Greater together than apart’, Osinbajo noted that the civil war was a stain on the history of Nigeria.

He, however, said it would be foolish if Nigerians passed through such a thing again.

Osinbajo said the demand for secession was not exclusive to Nigeria but was also present in many western countries including the United Kingdom and the United States.

He, however, stated that the answer to the problems of Nigeria goes beyond secession.

The acting President said the diversity in Nigeria should be seen as a blessing because it offered manifold opportunities for greatness.

Osinbajo added, “The most successful nations of the world are those who do not fall into the lure of separation but who through thick and thin forge unity in diversity. Nigeria is no different. We are not two or three but more of 300 ethnic groups between the same geographical space, presented with a great opportunity to combine all of our strengths into a nation that is truly more than the sum of its parts.”

He said Nigerians should never shy away from discussing the terms of our unity because debate was an essential aspect of democracy.

The acting President added, “I fully believe that Nigerians should exercise, to the fullest extent, the right to discuss and debate the terms of our existence. Debates and disagreements are fundamental aspects of democracy.”

The President of Igbo socio-cultural group, Ohanaeze Ndigbo, Chief Nnia Nwodo, said the political system was jaundiced and hindering proper development, adding that with fiscal autonomy, every state in Nigeria would develop faster.

Nwodo said, “Before the war, national unity was the norm. A Biafran was a member of Northern Nigeria House of Chiefs. Biafrans lived freely and invested in all parts of Nigeria.