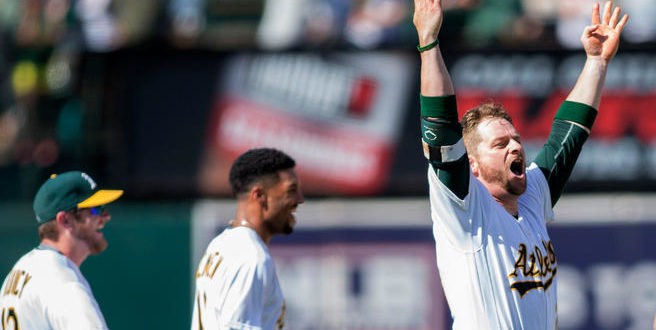 The Oakland A’s tied up some loose roster ends on Friday by recalling 1B/OF Matt Olson and RHP Frankie Montas, the team announced. These moves filled the spots that were vacated on Wednesday when relievers Zach Neal and Michael Brady were optioned back to Triple-A Nashville.

Both new additions have played for Oakland already this summer. Montas made 21 appearances out of the bullpen, flashing his triple-digit heat but also struggling with walks and homers. He was a top prospect due to his raw stuff but was sent back down to continue refining it.

The demotion appears to have helped. Even as Montas began to stretch out into a starter, he still managed to cut his walks and didn’t allow a dinger in seven games. His last two outings each featured four shutout innings, with 10 Ks and 2 BB in total.

Meanwhile, Olson is in his fifth stint for the A’s this year as he bounces back and forth to fill temporary roster holes. He’s still as hot as ever, and in 10 Triple-A games (43 PAs) since his last demotion he’s sporting a 143 wRC+, 2 HR, 8 BB, and 7 Ks. Just waiting for that permanent assignment to open up at this point. His MLB numbers in 16 games (58 PAs):

With these moves, the A’s now have a seven-man bullpen and four-man bench. As usual, we’ll see if that’s a permanent arrangement, or merely a temporary setup until the next starting pitcher is ready to return from the disabled list (like Cotton or Graveman, both currently on minor league rehab).