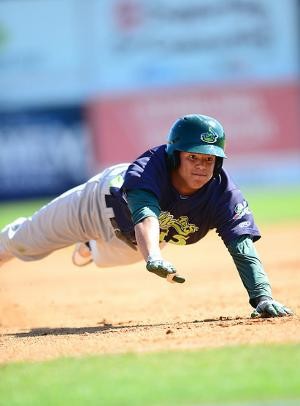 For the second straight year, infielder Yairo Munoz got off to a late start for Double-A Midland after opening the season on the disabled list. This time around he was delayed by a hamstring injury, and it cost him all of April. But he’s now been back in the lineup for a month, and he’s putting up decent numbers in the early going (in 99 plate appearances):

He caught fire on the RockHounds’ latest road trip, going 10-for-27 (1.022 OPS) with five extra-base hits and only two strikeouts. Interesting notes on his batted ball data: he pulls the ball as much as anyone on the team, but also hits it on the ground over half the time (seems like a bad combo, and matches what he did last year). He also swings and misses more than I’d like to see from a guy who relies on his hit tool rather than a big walk rate or massive power.

What should we make of Munoz at this point? His journey has taken the once-hot prospect through a quiet year in Single-A, which culminated in a successful late-season callup to High-A, which earned him a fastpass to Double-A, where he has floundered ever since (until now, maybe?). Some facts to consider:

For every reason for hope, there is also a downside. For every complaint, there is an excuse to help offset it. You could hold just about any opinion about Munoz’s future and make a logical case for it.

My best guess, in the distant view from my armchair, is that Oakland made a mistake by pushing him up to Double-A after such a short experience in High-A. They should have let him build on the success he had in Stockton, both in terms of production and also maturity. The error was then exasperated by Munoz’s ill-timed injury problems, and so it’s no wonder that he struggled last year.

And so, as usual, we wait and see what happens next. Did he just need that extra year to adjust to the upper minors? Did he just need to get healthy, and/or finish the physical development of his early-20s? Or is he simply one of the prospects who doesn’t pan out, a box of tools that never quite clicks? We won’t necessarily know the answer by year’s end, but this is a critical period for Munoz to announce which direction he’s headed.

While we’re on the subject of the middle infield:

Those are two of Oakland’s better position-player prospects, both plugging along just fine in Double-A at age 22. In particular, Schrock is demonstrating the low K-rate he’s known for. Both players are adept at making contact and spraying the ball to all fields, though Martin might be best served getting the ball off the ground more often (61.4% grounder rate leads the Texas League).

While Midland’s infield contains the top-rated prospects, their outfield has provided most of the actual production this season. We looked at them in depth last time, and here’s an update:

As the BABIP numbers begin to normalize, we get a better idea of what’s going on.

The RockHounds saw a couple of their top pitchers move up to Triple-A Nashville this month, but they’ve received some interesting names from High-A Stockton below them. All of these hurlers were overwhelmingly deserving of their promotions.

The biggest name on the way out was starter Corey Walter, who posted a 2.44 ERA and 2.92 FIP in 10 games for Midland. He spent nearly a season and a half quietly putting up zeroes in Double-A, and now he’ll get his chance at the highest level of the minors at age 24. Joining him is Jake Sanchez, who was in his third year in Midland but has finally found his niche as a fireballing reliever. The 27-year-old already missed time to a brief injury this year but otherwise racked up strikeouts when on the mound.

The Hounds also lost 24-year-old Joel Seddon to Nashville. The right-hander had been squeezed out of Midland’s rotation, and his numbers look mediocre-at-best on the surface, but I still haven’t forgotten that he posted a sub-2.00 ERA in the second half last year. He’s long been one of my favorite deep-sleepers and I’m glad he’s getting his chance in Triple-A, even if he ends up flaming out spectacularly.

On the flipside, the newest member of the rotation is lefty Evan Manarino, who can most easily be described as a Tommy Milone clone. After posting a strong 4.3 K/BB ratio in Beloit last year, he was working on 41 Ks, 3 BB in Stockton before his callup. Each step up the ladder will be a new test for his mid-80s velocity. Meanwhile, righty reliever Carlos Navas finally got his long overdue promotion to Double-A, after striking out 43% of batters he faced in High-A this year. Both new additions are 24 years old.

Holmes has the highest rates of both strikeouts (23.7%) and walks (11.1%). Graves has a 3.18 ERA and 3.03 FIP through five starts. Fillmyer and Naile have solid ERAs but shaky FIPs. In the bullpen, righties Sam Bragg and Lou Trivino are the remaining standouts.

Stockton is off. Nashville is basically playing a double-header, completing a suspended game before their scheduled tilt.