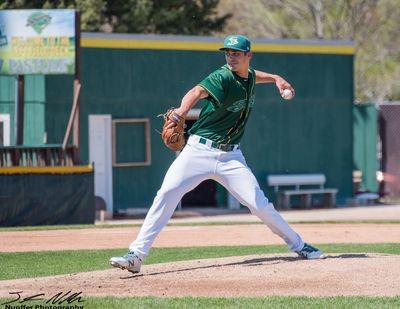 Here at Athletics Nation we follow the Oakland A’s farm system quite closely. Foremost, we’ve got our own crowdsourced Top 30 list. Beyond that, there’s a whole other set of fringe guys we keep an eye on. And then there’s the rest of the org filler, who aren’t on the radar but occasionally do something interesting. This post is about the limbo between those last two groups, the no-names aspiring to climb into the fringes of relevancy.

We already talk a lot about the upper minors, between Triple-A Nashville and Double-A Midland, so today we’re sticking in the lower minors — that is, the various levels of A-ball. As a matter of coincidence, each of the players highlighted is a pitcher.

Drafted in the 21st round in 2015, the lefty has carved out a bullpen role. He’s dealt with some minor injuries along the way, but he’s striking out over 11 batters per nine innings over the last two years (combined Beloit and Stockton). His walk rate is a bit high but he makes up for some of it by keeping the hits and homers low.

Tomasovich’s numbers are mediocre compared to the others on this list, but one thing they don’t show us is this:

That’s a sidewinding lefty reliever, which at the very least is one of the most aesthetically pleasing things to watch in baseball. It’s also a great look for a LOOGY, if that’s the direction his role goes, since it adds deception against lefty hitters who were already at a platoon disadvantage to begin with. Lefties have actually hit him better than righties this year, but it’s been entirely BABIP; the isolated slugging numbers are the same, and his K/BB rate (a far better platoon indicator than small-sample OPS) is better against lefties (as it was last year too).

Stockton also has a righty sidearmer in closer Nolan Blackwood (17-of-18 saves), and personally I think it’s a little extra fun to root for these guys. (Blackwood video link)

Honorable mention: I thought about choosing LHP Brandon Marsonek as Stockton’s sleeper, but I’m going to wait until he’s played a bit more. The 23-year-old went undrafted this summer as a senior out of a weak college conference before signing with the A’s. His numbers are nothing special yet (13⅔ ip, 11 Ks, 7 BB), but just the fact that he’s in High-A is impressive while the rest of the 2017 draft class is still in Low-A Vermont at best — the assignment was meant to be temporary fill-in duty but he’s held his own so far (via Melissa Lockard of Oakland Clubhouse).

Meanwhile, 23-year-old RHP Angel Duno continues to put up huge K/BB numbers (4.8 this year, just like last year in Beloit). He’s also upped his strikeouts overall, with his K/9 rate going from the 6ish range in past seasons up to 8.3 today. He’s proving he can hit the zone reliably, but there’s still work to be done — when hitters do make contact, they’re torching him.

Once again we draw on the 2015 draft, this time with Gorman in the 31st round. That’s nearly Ryan Dull territory, in terms of draft position.

If it seems like he should have made it further up the ladder than this by now, there’s a good reason: He missed the entire 2016 season after surgery for a torn rotator cuff, and didn’t even return this year until the end of June. His entire professional career has pretty much been a handful of games in Low-A in his draft year, and then this current performance in Beloit.

Of course, we shouldn’t get too excited about a 25-year-old mowing down the hitters who weren’t good enough to get midseason promotions to High-A. But he’s certainly getting back on the horse in style with his low-90s fastball, and it’ll be interesting to see how these monster numbers might translate to Stockton.

Honorable mention: We’ve recently talked about LHP Zack Erwin, who is back from the DL himself and pitching well in Beloit’s rotation. He’s too relatively well-known to make this list of no-names, as he was once on the CPL radar and fell off at least partly because of injury. After another good start Friday night (his 16th), he boasts a 2.28 ERA in 79 innings (80 Ks, 20 BB, 4 HR).

We’ve talked a lot about the 2017 draft class this summer, but here’s a different member of the Lake Monsters. I don’t know much about the 20-year-old Ruiz, so here’s Keith Lieppman, the A’s Director of Player Development (via Lockard):

He doesn’t have a ton of strike-outs. He’s an aggressive sinkerball type guy. He’s not very big yet [6’1, 165]. He’s one of those, like a young Pedro Martinez, really skinny and hasn’t grown into his body yet. But he’s a live arm, quick arm and a guy who made the All-Star team in the New York-Penn League. It’s pretty impressive for a guy to come out of Colombia and be this impressive this early on.

This is Ruiz’s first pro experience stateside, and so far he’s standing out in a good way. Better yet, he’s currently in Vermont’s starting rotation and has stretched out to four innings in each of his last few games while maintaining his strong K/BB rate.

Honorable mention: The college pitchers from the draft. Basically all of them. A quick rundown of the top names:

Dunshee and Howard are the leaders so far, and there’s an argument to be made for Howard’s K/BB rate over Dunshee’s ERA (the latter will be tested again Saturday). Marks is right behind them but has already been susceptible to dingers in a league in which they aren’t prevalent. Danielak and Salow are racking up Ks at least, but also have too many walks. Salow is the only lefty on the list.

One other name from outside the draft: RHP Wandisson Charles, a 20-year-old Dominican who stands 6’6 and throws a 100 mph fastball (via Lockard). He’s walking nearly a batter per inning for Vermont as he learns to harness his stuff, but he’s missing bats too (20 ip, 27 Ks, 18 BB).

Never tell me the odds

By pointing out players like Tomasovich, Gorman, and Ruiz, my intention isn’t to suddenly label them as hot prospects. But with the numbers they’re putting up, they’re worth keeping an eye on as they move up the system to face their next challenges. Of course, success in the lower minors is only the beginning of the journey and most prospects will get exposed at higher levels, but if a pitcher was going to jump on the radar then these performances would be a good way to start.