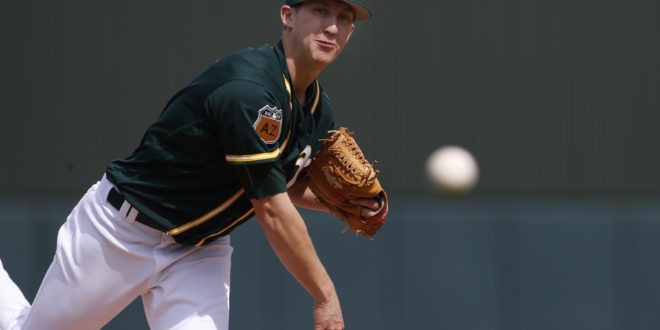 The Oakland A’s called up pitcher Daniel Gossett from Triple-A Nashville, the team announced Wednesday morning. The right-hander will make his MLB debut today in a start against the Miami Marlins, in place of the injured Andrew Triggs. To make room on the 25-man roster, 1B/OF Matt Olson was optioned back to the minors.

The 24-year-old Gossett was Oakland’s 2nd-round draft pick in 2014, and he enjoyed a breakout last season that catapulted him from High-A all the way up to a brief cameo in Triple-A Nashville. He stayed in Triple-A to begin this year, and after a shaky first month he settled down — since May 1 his ERA is 2.14 (7 starts), and he hasn’t allowed a walk in his last three outings (21 ip, 18 Ks).

He ranked No. 9 on our Community Prospect List last winter, but he’s technically higher now since a few of the names above him have officially graduated (Cotton and Montas outright; Maxwell right on the border). Here’s a brief scouting report from MLB Pipeline:

Gossett has long shown a strong arm, with a fastball that sits in the low 90s, reaching 95-96 mph with good arm-side life and late sinking action. His curveball projects to be above average and is his best secondary offering, and he tightened up his upper-80s slider, a dominant offering in college, last season after losing feel for the pitch at the outset of his pro career. Gossett also has good feel for a changeup, giving him a weapon to help neutralize left-handed hitters.

Gossett made strides on all fronts last season as he generated more whiffs and induced weaker contact, all while reducing his walk rate against advanced hitters. He’s been a model of durability early in his career, logging exactly 27 starts in back-to-back years, and is a safe bet to become a No. 4 starter, although his 2016 campaign suggests he may be capable of achieving a more significant role.

Meanwhile, Olson made it into three games during this third stint in Oakland, including one start. Unfortunately, he went 0-for-5 in the start and hitless overall, managing just one walk in seven total plate appearances. He’ll return to Nashville until a spot opens up again, but despite his brief 0-fer in Oakland he’s still a top prospect who is on fire in the minors.

Gossett also needed to be added to the 40-man roster, but there was already an open spot and so no other moves were required to fit him in. As for Triggs, Susan Slusser of the S.F. Chronicle has more info on the pitcher’s less than ideal MRI results.