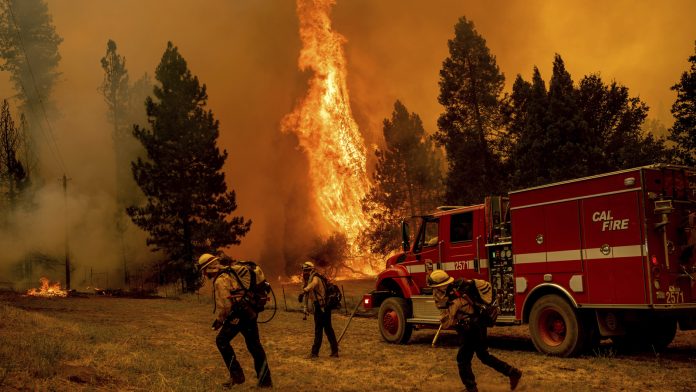 FRESNO, Calif. (KFSN) — Crews have begun to gain containment on the Oak Fire in Mariposa County that has forced more than 6,000 people to evacuate and many of them to lose their homes.

The wildfire has scorched 18,532 acres since it first sparked Friday, becoming the largest wildfire California has suffered so far this year.

Governor Gavin Newsom has declared a state of emergency for Mariposa County.

As of Tuesday, containment is at 26%.

CAL FIRE says the Oak Fire has destroyed 42 homes. On Tuesday, evening, officials said they had reopened the Highway 140 entrance to Yosemite National Park, which was shut down due to the Oak Fire.

More than 2,000 fire personnel are fighting to control the flames from ground and from air, racing against time as the fast-moving wildfire continues to burn dangerously close to over 1,000 more buildings.

The Oak Fire was sparked just after 2 pm Friday near the community of Midpines between Mariposa and Yosemite National Park. By evening, it had reached the Sierra National Forest.

On Monday and Tuesday, officials reduced some evacuation orders to fire advisements.

That means residents are allowed in their homes, but should be ready to leave in case flames spread further.

Areas including Darrah Road, Cole Road, Silva Road, Allred Road, and Morningstar Road are now open, but only for residents who live in the area.

You can see updates and details on this evacuation map created by the Mariposa County Sheriff’s Office.

Areas marked in red are where residents are ordered to leave. Areas in yellow are under fire advisories.

Governor Newsom has secured federal funding to keep resources and firefighters moving in.

Firefighting efforts are being hampered by hot weather with minimal humidity. The fire is also burning in an area with high tree mortality and dense fuels.

This was the third wildfire to spread rapidly and force evacuation in the county in two weeks.

Firefighters are still trying to fully contain the Washburn Fire.

RELATED: Track wildfires across Central California and the state with this interactive map

Several roads in Mariposa County are closed. You can find updates on the road closures on CAL FIRE’s page.

An evacuation center has been set up by the Red Cross at Mariposa Elementary School. Evacuees are being given safe shelter, water, meals and more resources.

For the latest developments, photos and videos on the Oak Fire, click here.