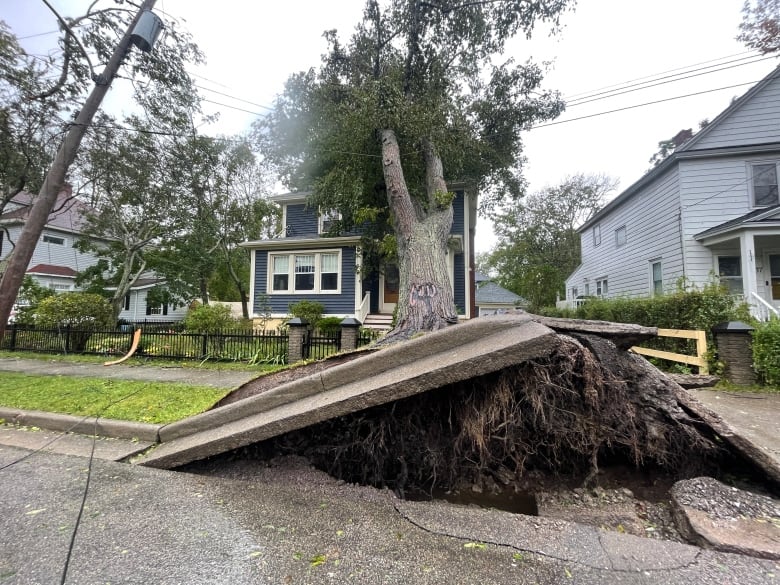 Many Nova Scotians will be spending part of Sunday in temporary shelters, making insurance calls, revving up chainsaws and wielding rakes as they clean up after post-tropical storm Fiona.

The storm raged through the province on Saturday, downing trees and power lines, flooding homes, washing out roads and leaving more than 250,000 Nova Scotia Power customers without electricity on Sunday morning.

Fiona made landfall as a hurricane-strength post-tropical storm near Whitehead, N.S., near Canso, in the early hours Saturday, according to Environment Canada.

The highest winds in Nova Scotia were reported in Arisaig, north of Antigonish, where they reached gusts of 171 km/h, according to preliminary information.

The highest rainfall totals were in Osborne Head near Eastern Passage, where 192 millimetres fell.

The Canadian Armed Forces has been called in to help remove debris, and Prime Minister Justin Trudeau said Saturday that Ottawa has approved Nova Scotia’s request for disaster assistance funding, which will assist municipalities repair infrastructure and help people pay for losses.

Premier Tim Houston and the ministers of EMO, finance, public works and mental health will survey some of the hardest-hit areas of Cape Breton on Sunday by helicopter.

In Cape Breton, about 200 people had to leave their homes after they were damaged in the storm. They’ve been moved to comfort centres at the Coast Guard College and the Membertou Trade and Convention Centre.

Amanda McDougall, the mayor of Cape Breton Regional Municipality, said the top priority for staff is ensuring residents have adequate shelter and support.

“To see the damage in people’s homes is really really, it’s heartbreaking. Roofs are off. There’s one house that we had seen, their roof was completely off and their roof was on their neighbour’s yard.”

McDougall said the state of emergency in the municipality will last for seven days.

The Cabot Trail from Neils Harbour to Ingonish, which closed on Saturday, has reopened, while the road will reopen at French Mountain by early afternoon.

In northern Cape Breton around Neils Harbour, reports are that damage has been devastating.

It has been difficult to reach people and Victoria County emergency management co-ordinator Lyle Donovan said that’s because along with electricity, all phone service is pretty much gone.

Donovan said a 500-metre stretch of road from Neils Harbour to New Haven has been destroyed by water and wind.

“It’s like you’re walking on a rocky beach,” he said.

A couple of homes have been damaged, along with a few vehicles and fishing boats, but no one appears to have been seriously injured.

A bridge on the road that washed out has left four homes stranded, some of which have already been evacuated.

Osborne Burke, general manager of the Victoria Co-op Fisheries in Neils Harbour, is in Europe on his way to a seafood trade mission. However, he has spoken to staff at the fishermen-owned processing plant and seen pictures.

The damage at the fish plant was “horrendous,” Burke said. The plant is onshore inside a large rock breakwater, but it’s like that didn’t even exist, he said.

The wharf was destroyed and a concrete wall at the plant was knocked down, soaking electrical panels with saltwater. That means they might dry out and look fine, but could be ruined.

Several 40-foot sea containers full of frozen fish products were “lifted off their pads and thrown around like they were dominoes,” Burke said. With no power, that product will be lost.

Burke said from what he’s seen and heard, “a quick estimate is we’re north of $1 million damage at our facility alone. It’s damage we never, ever thought would occur.”

Thankfully, no one was seriously hurt, he said.

“That’s the most important thing. Everything else can be rebuilt.”

268 trees removed from roads in HRM on Saturday

In the Halifax Regional Municipality, crews are working to clear brush and remove fallen trees that are obstructing streets.

Erica Fleck, the assistant chief of Halifax Regional Fire and Emergency, said crews removed 268 trees from main roads in the municipality over a 12-hour period Saturday.

“There’ll be a lot more to do today and over the continuing days, but like I said, how do you eat an elephant? One bite at a time.”

Fleck said it will probably take another five or six days before the cleanup is complete.

HRM Mayor Mike Savage said the area was well-prepared for the storm but is already making strides with the cleanup.

“There’s a lot of work. We got hit. It’s going to take some time, but we’re bouncing back now.”

NSP to use drones to assess damage

Peter Gregg, the CEO of the utility, told the CBC it’s hard to give firm restoration dates, but the company is using foot patrols, helicopters and, for the first time, drones to assess damage and refine restoration estimates.

“There are going to be parts of this province where our customers can expect multiple-day outages, as difficult as that is. I know it’s frustrating, it’s just the extent of the damage.”

Gregg said one challenge is that the winds were still high in some areas on Saturday, so crews were not able to assess damage and safely do repairs. Accessibility was also an issue, as downed trees and road washouts prevented crews from getting to repair sites.

The utility already had 900 crews working on restoring electricity by Sunday morning, and “several hundred” more coming from New Brunswick, Quebec and Maine, he said.

Nova Scotia Power was well-prepared for Fiona, Gregg said, adding that the company staged crews and equipment across the province before the storm hit, and was able to stock up on supplies such as poles, transformers and lines.

“We’ve got hundreds of poles that are broken, snapped right off. So just the time it takes for us to go along and replace each one of those poles once we get there is just time consuming and lots of work.”

The utility added a command centre in Sydney to co-ordinate plans and resources for restoring services in Cape Breton.

Some flights have resumed in and out of the Halifax Stanfield International Airport, though many are still cancelled, and departing and arriving flights at the JA Douglas McCurdy Sydney Airport are slated to proceed as scheduled Sunday.

Halifax Transit announced its services are operating as usual on Sunday.