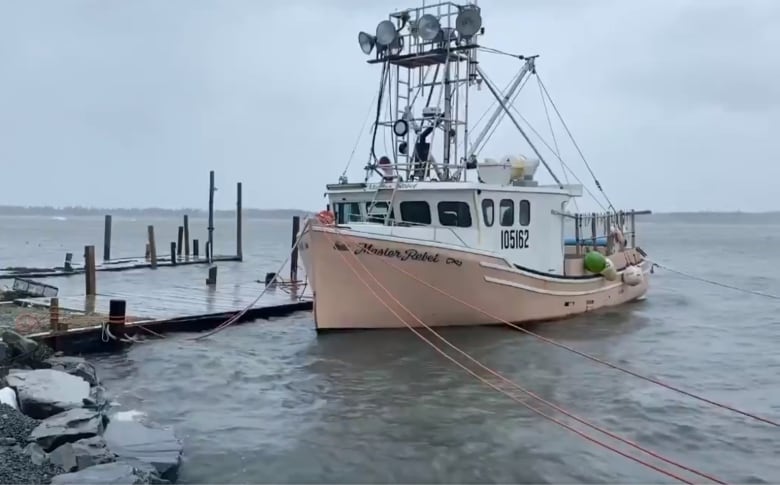 As Nova Scotians brace for the arrival of Teddy, which has now transitioned to a post-tropical storm, officials are urging people to stay away from the Atlantic coast, where an expected storm surge threatens to damage infrastructure and endanger anyone close to the water.

The latest track has Teddy making potential landfall Wednesday morning over Nova Scotia’s Eastern Shore, but weather conditions are expected to deteriorate before then.

In a news release from the city of Halifax late Tuesday afternoon, residents in high-risk areas in the Sambro area, Peggys Cove and along the Eastern Shore were being encouraged to relocate.

“Citizens are encouraged to be in alternative locations prior to the arrival of the storm,” the release said.

The road to Peggys Cove, Lawrencetown Road, and Highway 207 from Seaforth and Chezzetcook have been closed to non-residents.

According to Environment Canada, Teddy has finished its transition into a powerful post-tropical storm. As of 9 p.m. AT Tuesday, the storm was about 310 kilometres south of Halifax, moving toward Nova Scotia at around 28 km/h.

CBC meteorologist Ryan Snoddon says the opening round of the storm has produced some heavy downpours and strong wind gusts. Peak gusts — as of 6 p.m. — reached 80-100 km/h along parts of the Atlantic coastline.

Snoddon said much of New Brunswick and P.E.I. will continue to see rain and widespread winds gusts exceeding 50-80 km/h. Meanwhile, Nova Scotia will begin to feel a lull in rain and strongest winds.

The lull moves northward across P.E.I. and New Brunswick overnight. Light rain and a few stronger gusts are still possible during this time.

The second round will approach from the south.

Snoddon said rainfall totals by the end of the first round are likely to be in the 20-40 millimetre range, with some pockets closer to 50 millimetres. He said Teddy will approach the coast of Nova Scotia through the early-mid morning hours on Wednesday.

Hurricane Teddy is expected to weaken to a tropical storm by the time it arrives in Atlantic Canada, but preparations are underway, especially in areas devastated by Hurricane Dorian last year. 3:22

“It’s expected that Teddy will make landfall along the Eastern Shore of Nova Scotia as a post-tropical storm with Category 1 hurricane-force winds,” he said.

Snoddon said areas near and just east of the track along the Eastern Shore and across Cape Breton can expect a period of sustained winds near 60 km/h with gusts exceeding the 90-110km/h range.

Elsewhere, across Nova Scotia, P.E.I. and southeastern New Brunswick winds will increase with gusts in the 60-80 km/h range.

As the centre of Teddy brings another push of strong winds, Snoddon said it will also bring another round of storm surge and pounding waves, exceeding 10 metres over eastern areas.

High tide late Wednesday morning and early afternoon will be another area of particular concern for eastern Nova Scotia, Cape Breton and also for the north shore of P.E.I.

Snoddon said strong winds with gusts near and exceeding 100 km/h are still possible across Cape Breton on Wednesday afternoon.

“As Teddy begins to depart, we’ll see the rain tapering off and the strongest winds easing from southwest to northeast across the region,” he said.

Cape Breton, the Northumberland shore of Nova Scotia and P.E.I. will also continue to see gusts howling a little longer into the evening.

“Lingering light rain over P.E.I. and eastern Nova Scotia will depart west to east through the evening and overnight,” Snoddon said.

Municipal Affairs Minister Chuck Porter, who is in charge of Nova Scotia’s Emergency Management Office, said people need to stay away from coastlines and riverbanks.

“I know people are attracted to the shoreline. They love to watch the waves. I just want to caution folks: please stay back. Remember, if you get trapped up there, somebody has to come and try to rescue you. So we are putting people in jeopardy unnecessarily by doing such things.”

Porter said he urges the public to avoid non-essential travel as the storm picks up.

Nova Scotia Power has 300 crews on standby across the province to tend to any damage the storm could do to the power grid. Mark Sidebottom, the utility’s chief operating officer, told reporters 170 of those crews came to Nova Scotia from outside the province, but from within the Atlantic bubble to control the spread of COVID-19.

“We’re watching very closely the track of the storm,” Sidebottom said. “We will mobilize crews as we understand where there may be more damage versus others. But we have actually a good spread across the province right now for initial response.”

Sidebottom said the power utility spent $20 million over the past year to clear tree branches and other vegetation to “storm-harden” the system in preparation for major storms, like Teddy.

While around 4,000 households had lost power throughout the day, some areas have been restored. As of 11 p.m. AT Tuesday, 2,492 Nova Scotia Power customers had no power.

The biggest outage, affecting 1,028 households, is in Annapolis County in the Annapolis Royal, Graywood, Perotte and Lake La Rose areas. A further 589 homes have lost power nearby in the Delaps Cove, Parkers Cove and Hillsburn areas.

In the Smiths Cove area, another 362 customers were without power Tuesday night.

Tiffany Chase, spokesperson for the Halifax Stanfield International Airport, told CBC News that all flights departing before 8 a.m. Wednesday have been cancelled.

Halifax Regional Municipality suspended ferry service at 2:30 p.m. Other Halifax Transit buses were pulled off the road at 7 p.m. Tuesday, with a tentative resumption of service at noon Wednesday, according to Halifax Mayor Mike Savage.

The municipality is posting storm-related service disruptions on its website.