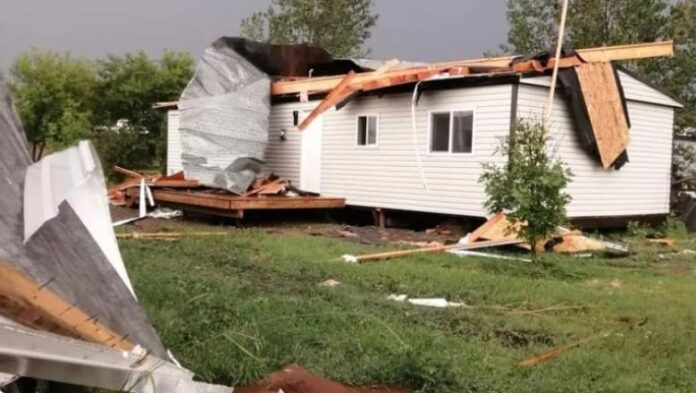 It took a matter of minutes.

Greg Mason was outside his trailer home in Hines Creek, Alta., filming a summer thunderstorm, when he noticed clouds starting to roll faster. A wall of rain fell and he couldn’t see the edge of his 16-foot deck. Debris flew across the yard, banging the home.

Mason, his wife and their cat and dog hunkered down next to their living room couch, feeling the house buck and whine like a wild animal. Then, the room filled with the screech of nails being pulled. The roof ripped off.

“We were going to die,” Mason recalled thinking at that moment. “And there’s nothing you could do about it.”

The village of Hines Creek, about 445 kilometres northwest of Edmonton, is in recovery mode after a strong storm rolled through Friday night. Uprooted and snapped trees, roofs, and general debris littered the community Saturday.

Alberta Emergency Alert issued a tornado warning for the Fairview, Alta., area — just southeast of Hines Creek — shortly before 9:45 p.m. Friday, because a severe thunderstorm nearby was “possibly producing a tornado.”

Hines Creek residents told CBC News the thunderstorm had already been underway for a while before things turned rough. They didn’t get the alert until after the worst had passed.

“It could be plough or straight-line winds, or it could have been a tornado,” Desjardins said. When Desjardins spoke with CBC News Saturday morning, ECCC had yet to receive an image of a tornado.

The community had lost power at some point during the storm, which hindered the public’s ability to send in information, photos and footage of the weather event in real-time, she added.

Photos posted to social media show trees that were uprooted entirely, snapped in half, or bent over; some structures such as sheds were damaged or destroyed; and the roofs of some homes and buildings were torn off.

The weather agency had received many reports of rain walls and Ping-Pong ball-sized hail.

The hail started to fall after the roof ripped off Mason’s trailer. The chunks of ice looked like golf balls, he said.

Kathy Loxterkamp and her husband have lived in Hines Creek for more than 50 years, and they have never witnessed such a storm.

“We’ve had bad weather, and there have been times where trees have blown down. But nothing like this, ever,” Loxterkamp said.

“It was just so instant.”

Friday had been hot, and the thunderstorm seemed like it was going to be fairly typical, she said. But around 8:30 p.m., things started turning eerie and Loxterkamp and her husband went inside their house in case it rained.

Then the outdoors turned white, Loxterkamp said. She and her husband hid in their basement because the weather showed all the signs that a tornado was coming. Footage from their security cameras showed trees coming down.

“What’s going to be up there?” she and her husband wondered from the basement. “Is the roof going to be there?”

Loxterkamp and her husband were also grateful to have a basement, she added.

About 10 minutes later, it was quiet outside again, she said.

Hines Creek, home to about 396 people, is a community where everyone knows everybody in town — and residents say that sense of community has shone brightly in the hours since the storm.

After the weather passed, members of the Mennonite community stopped by Mason’s property with sandwiches, and supplies to put tarp over the top of his trailer home where the roof used to be.

Others have donated trucks and a Bobcat tractor to help collect debris from the yard, he said.

A GoFundMe campaign to help pay for a new roof was launched Saturday morning. It had raised $305 as of 4:30 p.m.

“This community is top shelf bar none,” said Mason, who will be staying in a borrowed fifth wheel trailer for a while with his wife. “The people came together and everybody helped everybody.”

Loxterkamp checked on her neighbours once the weather passed Friday night, she said. The whole event was distressing and she didn’t go to bed until 2 a.m.

At 6:30 a.m., she and her husband were cutting fallen trees and moving debris in their yard. They’ll have to replace a shed, and there were a number of trees down, but otherwise everything was fine.

She and a neighbour also stopped by the seniors’ lodge to check on residents there, Loxterkamp said.

This morning, Little Denise Foods, a local Filipino restaurant, set up a station to give out free coffee, pancakes and eggs.

Loxterkamp is grateful to be part of such a community, she said.

“When something bad happens, they just come together and help.”