North Korea will ‘not get away’ with threats to U.S. territory, Trump says in latest warnings 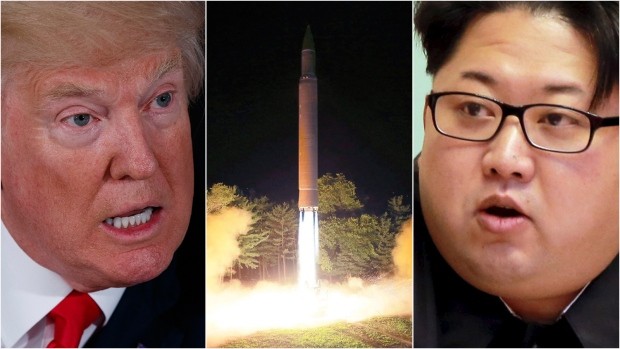 President Trump on Aug. 10 said threats he made to North Korea two days earlier about facing the “fire and fury” of the U.S. “may not be tough enough.” (The Washington Post)

BEDMINSTER, N.J. — President Trump made fresh threats of force Friday against North Korea, writing on Twitter that the U.S. military is “locked and loaded” and later telling reporters that the isolated country would “truly regret it” if it attacks Guam or any other U.S. territory.

“This man will not get away with what he’s doing, believe me,” Trump said of North Korean leader Kim Jong Un, whose nation, in open defiance of the United Nations, has been developing nuclear weapons capable of reaching the United States. “I hope that they are going to fully understand the gravity of what I said, and what I said is what I mean.”

Trump’s comments at his private golf club here, where he is on a working vacation, came several hours after he tweeted Friday morning that “military solutions are now fully in place, locked and loaded, should North Korea act unwisely.”

Early Friday night, after meeting with top U.S. national security and diplomatic officials, Trump did not back down but also sounded a more optimistic note.

“Hopefully it will all work out,” he said. “Nobody loves a peaceful solution more than President Trump. … We will see what happens.”

He made those comments after huddling behind closed doors with Secretary of State Rex Tillerson, U.S. Ambassador to the United Nations Nikki Haley and National Security Adviser H.R. McMaster. Trump also relayed that he plans to talk Friday night with Chinese President Xi Jinping, presumably about his country’s role in containing the military ambitions of its neighbor.

As Trump continued his bellicose rhetoric Friday — a tactic criticized by some U.S. leaders and allies — North Korea kept up its verbal salvos, as well. A commentary in a state-run newspaper said that the “U.S. military warmongers are running amok” and warned that “the U.S. and its vassal forces will dearly pay for the harshest sanctions and pressure and reckless military provocations.”

In the Pacific region and around the world, concern mounted over the rhetoric from both sides. German Chancellor Angela Merkel cautioned that “verbal escalation” may be the wrong response to the crisis.

The Washington Post revealed that U.S. analysts think North Korea has produced a nuclear warhead that can fit inside its missiles. Worried about what that means? Here are four things you need to know. (Elyse Samuels/The Washington Post)

[Trump reiterates warning to N. Korea: ‘Fire and fury’ may not have been ‘tough enough’]

The ratcheted-up talk by Trump comes as North Korea has stepped up its threats against the United States, including warning of a potential missile launch landing near Guam.

On Friday morning, Trump also retweeted images from the U.S. Pacific Command that showed two Air Force B-1B bombers that it said had joined counterparts from the South Korean and Japanese air forces in the region.

The command’s tweet included the hashtag #FightTonight, more of a signal of its readiness to fight if needed than a sign that it is spoiling for a battle within days. The Air Force has kept bombers on Guam for years, and the Pentagon and U.S. Forces Korea have long used the “fight tonight” motto in South Korea to reflect the seriousness of their mission.

#USAF B-1B Lancer #bombers on Guam stand ready to fulfill USFK’s #FightTonight mission if called upon to do so https://t.co/O3oVeFrNrG pic.twitter.com/IAm2qLwcWY

Public safety officials in Guam, meanwhile, have distributed a two-page pamphlet advising island residents on how to prepare and react should North Korea follow through on threats to launch a nuclear strike against the U.S. territory.

The document includes several ominous warnings, the first being: “Do not look at the flash or fireball — It can blind you.”

Trump said Friday night that he had not spoken to Guam’s governor but sought to offer reassurances, saying, “I feel they will be very safe.”

President Trump’s political rhetoric on North Korea has differed from before he declared his candidacy to now. (Taylor Turner/The Washington Post)

Asked to respond earlier Friday to those who say his threats could backfire, Trump told reporters, “My critics are only saying that because it’s me.”

“If somebody else uttered the exact same words that I uttered, they’d say: ‘What a great statement, what a wonderful statement,’ ” Trump said. “I will tell you, we have tens of millions of people in this country that are so happy with what I’m saying, because they’re saying, ‘Finally, we have a president that’s sticking up for our nation and, frankly, sticking up for our friends and our allies.’ ”

Just this past weekend, the administration was congratulating itself for orchestrating a unanimous U.N. Security Council vote to sharply increase sanctions against Pyongyang, describing steady diplomatic and economic pressure as the keystone of its strategy.

After Trump’s tweet Friday morning, Merkel told reporters in Berlin that “I don’t see a military solution to this conflict,” according to the media outlet Deutsche Welle.

“I see the need for enduring work at the U.N. Security Council … as well as tight cooperation between the countries involved, especially the U.S. and China,” she said.

Trump said Friday afternoon that Merkel was not speaking for the United States.

[China warns North Korea: You’re on your own if you go after the United States]

Meanwhile, Russian Foreign Minister Sergei Lavrov said the risks of direct conflict “are very high, especially given this rhetoric, [when] direct threats of using force are being made.”

“We don’t accept a nuclear-powered North Korea,” Lavrov said in response to questions at a youth forum, but he added that the United States should take the first step away from conflict.

He repeated a call by Russia and China for a “double freeze” in which Kim “freezes any nuclear tests, any ballistic-missile launches, while the U.S. and South Korea freeze large-scale military exercises, which are constantly used by North Korea as an excuse to conduct tests.”

The United States has rejected such a freeze, and an annual U.S.-South Korea military exercise is scheduled to begin later this month.

In the Pacific region, U.S. allies Japan, South Korea and Australia have called for caution but said they would support the United States in the event of an attack by North Korea.

[Are we on the brink of nuclear war with North Korea? Probably not.]

An editorial in China’s state-run Global Times said that Beijing should “prevent” the United States and South Korea from carrying out an attack designed to overthrow the North Korean government but that China should “stay neutral” in the event of a North Korean attack and U.S. retaliation.

Meanwhile, in a commentary published Friday in North Korea, the mouthpiece of the ruling Workers’ Party said in typically dramatic language that “the U.S. has been seized with anxiety and terror” since North Korea conducted its second intercontinental ballistic-missile test last month.

The United States is now “fearful of when weapons of Korea will shower shells on its military bases for aggression and mainland,” the paper said, accusing Trump by name of creating a “horrible atmosphere” by saying any war would be fought on the Korean Peninsula.

Amid calls at home and abroad for dialogue rather than threats, the Trump administration has kept open a back channel of talks with Pyongyang. But a senior official said, “I wouldn’t want to steer you toward the idea that there’s a lot going on.”

[Trump reiterates warning to N. Korea: ‘Fire and fury’ may not have been ‘tough enough’]

“I would only say that if the North Koreans were ready to talk on terms that we would consider acceptable, it wouldn’t be hard for them to find us,” said the official, who spoke on the condition of anonymity to discuss closed-door policymaking.

Trump told reporters that he didn’t want to talk about “back channels.”

North Korea closed down the official “New York channel,” as the communication line between its diplomats at the United Nations and U.S. officials is called, last spring after the Obama administration imposed sanctions on Kim for human rights abuses. Washington and Pyongyang have no diplomatic relations.

But talks were opened again in early June when the U.S. special representative for North Korea policy, Joseph Yun, traveled to Oslo to meet with Pak Song Il, a senior diplomat at Pyongyang’s U.N. mission, on the sidelines of unofficial “track two” talks routinely held among regional experts.

The main purpose of that meeting, hosted by Norway, was to discuss four Americans being held hostage by North Korea, officials said at the time. Yun’s direct counterpart, Choe Son Hui, director of the America division in North Korea’s Foreign Ministry, agreed to allow consular access to the four by Swedish diplomats representing the United States in Pyongyang.

Before those visits could take place, however, Pak urgently summoned Yun to New York to tell him that one of the four, 22-year-old American student Otto Warmbier, was ill and was being released. Warmbier had been arrested 17 months earlier for allegedly attempting to steal a propaganda poster while on a tour to North Korea.

Yun and a medical team traveled to Pyongyang, where they found Warmbier in a coma. He was flown back to the United States and died a week later without regaining consciousness.

Since then, according to a person with knowledge of the situation, Yun has messaged Pak with a willingness to have bilateral “talks about talks,” even as he has pursued the release of the other three Americans.

Philip Rucker, Dan Lamothe and Brian Murphy in Washington; and Anna Fifield in Seoul contributed to this report.