North Korea tourism: US ‘to ban Americans from visiting’ 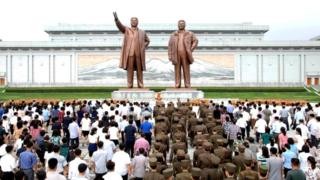 The US is to ban its citizens from travelling to North Korea, according to two agencies that operate tours there.

Koryo Tours and Young Pioneer Tours said the ban would be announced on 27 July to come into effect 30 days later.

The US has not confirmed the news.

Young Pioneer Tours was the agency that took US student Otto Warmbier to North Korea. He was later arrested and sentenced to 15 years in prison, but was returned to the US in a coma in June. He died a week later.

The China-based company later announced it would no longer take visitors from the US to the country.

It issued a statement on Friday saying: “We have just been informed that the US government will no longer be allowing US citizens to travel to the DPRK (North Korea).

“It is expected that the ban will come into force within 30 days of July 27th. After the 30 day grace period any US national that travels to North Korea will have their passport invalidated by their government.”

Rowan Beard, of Young Pioneer Tours, told the BBC that the company had been informed by the Swedish embassy, which looks after US affairs in North Korea.

The embassy is trying to check on the number of US tourists left in the country.

Mr Beard said the embassy was urging all US nationals to depart immediately.

He said that the 30-day grace period would “give leeway for any [Americans] currently in the country as tourists or on humanitarian work”.

Simon Cockerill, of Koryo Tours, told the BBC it had also been contacted by the Swedish embassy.

He said the agency would still conduct tours and take Americans until the ban came into effect.

Mr Cockerill said: “It’s unfortunate for the industry but also for North Koreans who want to know what Americans are really like.”

North Korea eased the rules for American visitors in 2010

But there has been momentum recently in the US for a ban on travel.

In May, two congressmen introduced the North Korea Travel Control bill to cut off the foreign currency the country earns from American tourists.

A senior state department official said last month that Secretary of State Rex Tillerson had been considering a travel ban since April, and it had gained more urgency since the Warmbier death.

Otto Warmbier, 22, was an economics student who was arrested on 2 January 2016 and confessed to trying to take a propaganda sign from a hotel.

He was sentenced to 15 years of hard labour.

In June, North Korea said he had been in a coma for a year after contracting botulism.

He was flown back to the US on 13 June but died a week later without regaining consciousness.

His family rejected North Korea’s version of events, saying he had been subjected to “awful torturous mistreatment”.

There are reported to be three other US citizens in custody in North Korea:

The US has in the past accused North Korea of detaining its citizens to use them as pawns in negotiations over its nuclear weapons programme.

Tensions increased this month when North Korea announced it had successfully tested what it said was its first intercontinental ballistic missile (ICBM), the latest in a series of tests in defiance of a UN ban.

The US and South Korea then conducted a ballistic missile drill and issued a stark warning to the North.