North Korea: Talking is not the answer, says Trump 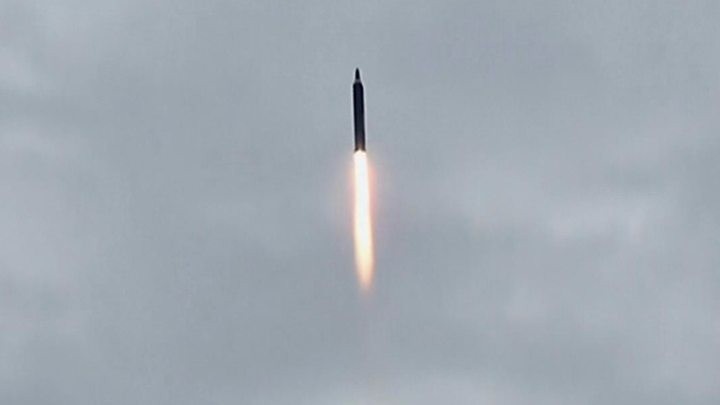 US President Donald Trump has said that “talking is not the answer” in dealing with North Korea’s military operations.

“The US has been talking to North Korea, and paying them extortion money, for 25 years,” he wrote on Twitter.

But the US Defence Secretary, James Mattis, insisted on Wednesday that there was still room for diplomacy.

North Korea has said its firing of a missile over Japan on Tuesday was “the first step” of military operations in the Pacific.

Russian Foreign Minister Sergei Lavrov has told US Secretary of State Rex Tillerson by phone that any further strengthening of sanctions against North Korea would be counter-productive.

Mr Trump’s comments come just days after he said that North Korean leader Kim Jong-un was “starting to respect” the US.

On Tuesday, Pyongyang fired a ballistic missile over Japan’s northern Hokkaido island, triggering public alerts to take cover before landing in the sea.

Speaking ahead of a meeting at the Pentagon with his South Korean counterpart, Song Young-moo, Mr Mattis said, “We are never out of diplomatic solutions.”

Russia has said that US military activity in the region is partly to blame for the increase in tensions, and has urged restraint and called for negotiations.

Mr Lavrov stressed on Wednesday that diplomacy was the only way to overcome tensions on the Korean peninsula, which have been escalating in recent months.

North Korean state media this week also repeated threats to the US Pacific island of Guam, which it called “an advanced base of invasion”.

Mr Trump said earlier this month that any such threats would “be met with fire and fury“.

The UN Security Council has unanimously condemned North Korea for its military actions.

While the statement said the regime’s actions were a threat to all UN member states, it did not threaten new sanctions against Pyongyang.

North Korea has repeatedly conducted missile launches in recent months, despite being barred from doing so under UN rules.

The latest, a domestically made Hwasong-12, was launched early on Tuesday Korean time from a site near Pyongyang.

It travelled some 2,700km (1,678 miles), at an unusually low height for North Korean missile tests, over Hokkaido before crashing about 1,180km off Japan’s eastern coast.

For the first time, North Korea’s official news agency KCNA admitted deliberately firing a ballistic missile across Japan. Previous projectiles which crossed the mainland were later claimed to have been satellite launches.