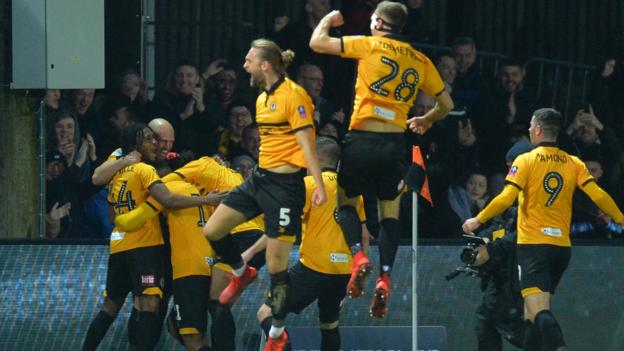 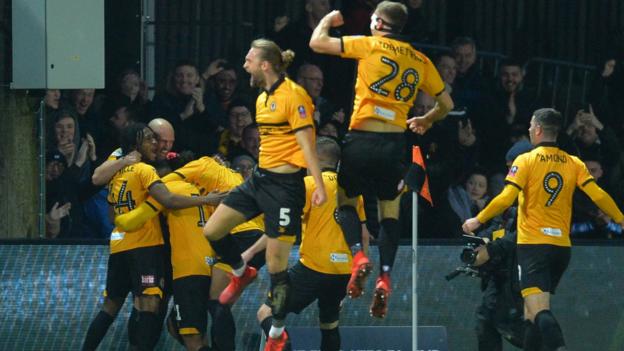 Newport County dumped 2016 Premier League champions Leicester City out of the FA Cup third round at a raucous Rodney Parade thanks to Padraig Amond’s late penalty.

Jamille Matt’s perfectly placed header after a pulsating run and cross from Robbie Willmott gave the Exiles the advantage against a side 74 places above them in the football leagues.

However, Amond’s 85th-minute penalty after Albrighton’s handball sent the crowd into raptures as Newport produced one of the greatest results in their history.

It is not an exaggeration to say Newport and Leicester are at completely opposite ends of the footballing scale. The year Leicester stunned the world under Claudio Ranieri to win the Premier League, Newport finished 22nd in League Two.

The enormity of the achievement was shown in scenes of jubilation at full-time as Newport’s players sank to their knees and punched the air in delight while their fans went wild.

Newport supporters could barely contain their glee, but did interrupt their celebrations to question BBC Match of the Day presenter Gary Lineker – a Leicester fan – with cries of “Gary, what’s the score?”.

The old Newport County went bust in 1989 and rose back through the wilderness to return to the Football League in 2013. They had not beaten a top-flight side in the FA Cup since 1964.

Flynn has overseen an extraordinary renaissance for the club, who were 11 points adrift of League Two safety with only 12 games remaining when he took charge in 2017. He kept County up and they have since punched well above their weight.

Newport, who took the lead against Tottenham in the fourth round last year, shocked Leicester after 10 minutes when Robbie Willmott’s superb run and cross provided the perfect ammunition for Matt to rise above Wes Morgan and head home his 14th goal of the season.

Leicester should have been in front but Joe Day twice denied Ghezzal, and all of a sudden they – and a sold-out Rodney Parade – were rocking.

Leicester goalkeeper Danny Ward did well to block Matty Dolan’s shot as Newport grew in confidence, Flynn conducting his players through a cacophony of noise.

Although Leicester boss Claude Puel made seven changes to his side – Jamie Vardy was left out and James Maddison named on the bench – he still selected five Premier League winners in the starting XI.

Leicester created several chances and should have earned at least parity by half-time, but careless finishing and last-gasp Newport defending denied them.

Just as Leicester seemed to be running out of ideas, Ghezzal smashed them level after Day kept out Iheanacho’s header.

But Albrighton inexplicably handled in the box to gift Amond the chance to coolly send Ward the wrong way from the spot.

‘My voice has gone’ – what they said

“I’m so proud of the players. They were excellent from start to finish – the amount of work they did off the ball and the chances we created as well.

“Let’s not say that we just hung on – we created quite a few chances. And my assistant Wayne Hatswell said that Gary Lineker owes him a pint because he keeps going on about the own goal he scored!”

Leicester manager Claude Puel told BBC Sport: “Congratulations and well done to this team. They believed in themselves and created the upset.

“It is a big disappoint for us. It is difficult to accept.

“We had lots of opportunities without finding a clinical edge.

“We thought we did the most difficult thing to come back and then conceded a penalty. It was a typical cup game with the conditions.

“We had an experienced team to manage this game. We had lots of experience and a good team on the pitch.”

Scoring for fun in the cup – best of the stats