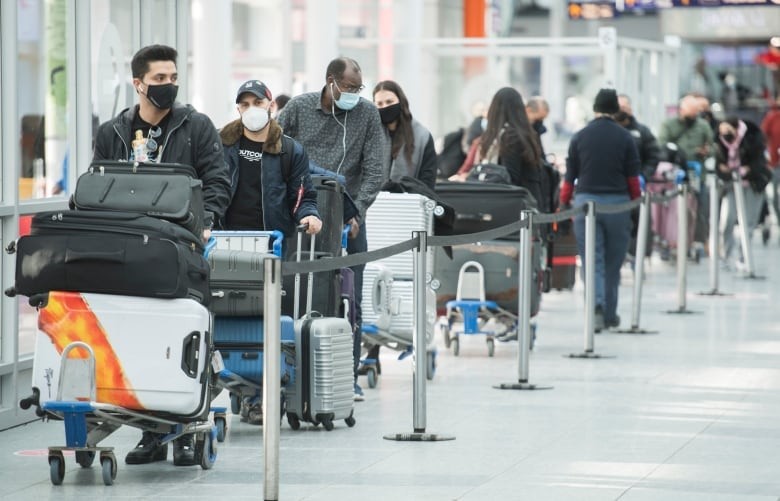 Despite reassuring words from the minister of transport last week, airlines have been told new regulations that come into effect Thursday are not expected to give them the power to exercise their own discretion and allow travellers to board planes to Canada if they were unable to get a negative COVID-19 test abroad, CBC News has learned.

The sources said that in the days before the rules come into effect there is still a lack of clarity and details. But the airlines’ understanding is that the proposed rules would order airlines to turn away anyone who doesn’t have a negative COVID-19 test taken within either 72 or 96 hours of the flight, depending on the location, said the industry sources.

The only exception, the sources said, is if travellers are in locations on a government list where the polymerase chain reaction (PCR) test — the standard nose swab test for detecting active COVID-19 infections — is not widely available to travellers.

But so far, Canada’s consular services around the world are still determining the availability of the testing in different regions, said the sources.

As of Tuesday, only a few locations — Saint-Pierre and Miquelon, off the coast of Newfoundland, and Haiti — are expected to be exempt from the rules and do not require proof of a negative test, sources said the airlines were told.

The proposed rules are at odds with the impression Marc Garneau gave the public last week. The minister of transport told CBC News that if travellers can show they couldn’t obtain COVID-19 tests abroad, they can still board flights home — but they’ll need to quarantine in a federally regulated facility in Canada.

“If they haven’t got the test result and there are clinics available, they will have to reschedule their departure because they won’t be allowed on board,” he told CBC News on Dec. 31. “If, on the other hand, they can demonstrate … that there was no facility, then they can be admitted on board.”

But the industry sources said airlines don’t have that kind of wiggle room or discretionary authority built into the draft regulations, which go into effect Thursday.

In a letter obtained by CBC News, the heads of Canada’s major airlines wrote Garneau this week saying there is a “real risk that Canadians will now be stranded abroad.”

The ministers of transport, foreign affairs and public safety are expected to hold a news conference Wednesday afternoon about the pre-departure testing requirements.

The government said it would be introducing the new testing regime last week, following multiple reports of Canadians — including political figures — travelling abroad for the holidays in defiance of government advisories against non-essential travel.

The government has already said the new rules say that travellers five years of age or older must receive a negative result on a PCR test within 72 hours before boarding a flight to Canada.

The rules include a small list of countries where for one week travellers will be allowed 96 hours, rather than 72, before departing to provide negative test results, the industry sources told CBC News.

The government has come under criticism for saying the new rules were coming without consulting with airlines first.

CBC News reported on Tuesday that, in their letter to Garneau, the airline presidents and CEOs said implementing the new rules by Thursday wasn’t feasible. The heads of Air Canada, WestJet, Air Transat and Sunwing — along with two major trade associations, the International Air Transportation Association and National Airlines Council of Canada — asked for the start date to be moved to Jan. 18.

“With the current timeframes and lack of clarity and detail, we must note particular concern over the very real prospect of Canadians of all ages being denied boarding and stranded at destination, in the current context of significantly reduced flight frequencies and over‐stretched airline, government and consular resources due to the pandemic,” said the letter.

But Garneau’s office said in a statement the plans will move ahead on Thursday at 12:01 a.m. ET. He is expected to share more details publicly on Wednesday.

In a statement on Tuesday, the minister’s office reminded Canadians that travel restrictions and measures can change on short notice.

“We are reaching dangerous case numbers in areas across the country and we cannot afford to stop the important work being done to protect the health and safety of Canadians,” said Garneau’s press secretary Allison St-Jean.

“Despite a challenging environment, airlines have played an important role since the beginning of the fight against COVID-19 and we are confident they will continue to do so.”