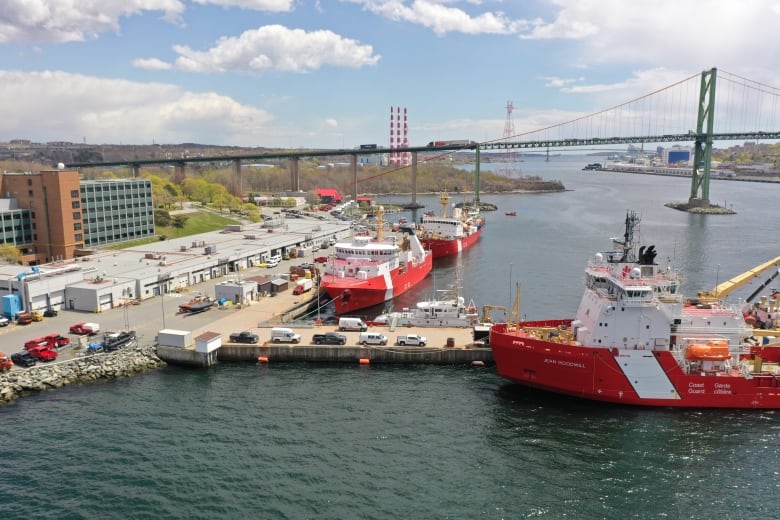 A year and a half after Canada’s new offshore fisheries science vessel, the Capt. Jacques Cartier, was delivered to its Halifax-area base, the coast guard ship has yet to complete sea trials or begin the training missions needed before it can become operational.

CBC News has learned that equipment failures, delays receiving parts, and COVID-19-related travel restrictions in Nova Scotia have combined to upend the timetable.

Mission-critical training that was supposed to start in April 2020 is now scheduled to begin late next month.

The ship is expected to depart the Bedford Institute of Oceanography in Dartmouth this week to resume sea trials to test and calibrate instruments, including a vital trawl winch that seized up and stopped working entirely during the last trial in December.

CCGS Capt. Jacques Cartier is the second of three offshore fisheries science vessels built under Canada’s national shipbuilding strategy at a cost of $778 million by the Seaspan Shipyard in North Vancouver.

It was delivered to Nova Scotia in November 2019.

A series of short sea trials last fall tested oceanographic equipment — which measure conductivity, temperature and depth — and acoustic and trawling gear on board.

As is not unusual during the shakedown of a new ship, problems were found.

There were data communication and software issues with acoustic sensors and malfunctions with the winches, according to records released under access to information laws.

The most serious mishap was the total failure of the starboard trawl winch which reels up the nets and heavy metal weights used to keep the nets on the ocean bottom.

The winch stopped working with more than two kilometres of cable in the water and could not be restarted.

DFO said the acoustic sensors have since been repaired and are awaiting testing.

The winch issue has also been identified and fixed.

“The problem aboard the CCGS Capt. Jacques Cartier was attributed to a singular bearing failure rendering the gearbox non-operational. The bearing has been replaced under warranty and the gearbox issue has been resolved,” DFO said in response to questions from CBC News.

The department did not make anyone available for an interview.

Winch problems were also found on the other two offshore fisheries research vessels, CCGS Sir John Franklin and CCGS John Cabot, but DFO said those issues were unrelated to the failure last December on the Capt. Jacques Cartier.

“The other OFSVs [offshore fisheries science vessels] experienced a different issue with their trawls, which was a slight axial movement in the trawl winch drums. A solution for all three vessels has been determined,” the department said.

Since the last sea trial, the Capt. Jacques Cartier has undergone one alongside refit where the cooling system was cleaned and flushed under warranty.

Inspections were underway last week. The ship was also waiting for parts for the sea water system.

DFO said it was not unusual for a brand new ship to undergo a refit.

“Our vessels have an annual maintenance routine consisting of regulatory surveys, as well as routine preventative maintenance to equipment,” the department said.

$20M set aside to ready ships for service

DFO set aside $20 million to bring the East Coast fisheries research vessels — the Capt. Jacques Cartier and the John Cabot — into service over a two-year period.

This was to take place in three phases: sea trials and calibration of system, practice and proficiency, and active comparative fishing.

Comparative fishing is when the new and existing offshore research vessels fish side by side during the regular survey program.

These cruises have been deemed “mission-critical” by DFO’s science branch to ensure continuity in the collection of data used to assess fish stocks worth hundreds of millions of dollars.

None of the five comparative cruises for the Capt. Jacques Cartier planned between April 2020 and March 2021 were completed.

DFO is still trying to figure out when it will carry out training scheduled for 2021-22.

“The coast guard is working with our regional science partners on the schedule. Both Fisheries and Oceans Canada (DFO) and the coast guard are committed to maximizing the number of programs/surveys we can deliver in the context of the ongoing pandemic to support the needs of resource managers and decision-makers,” DFO said.

The Capt. Jacques Cartier’s first alongside fishing trip is planned with CCGS Alfred Needler — a 39-year-old offshore research vessel with its own problems.

A $1.7-million refit at Newdock shipyard in St. John’s was supposed to end in April. It had to be extended due to expanded steel work.

DFO said structural steel on the trawl deck and flume tank by way of the galley deck all require renovation.

The Alfred Needler is not expected back in service until mid-June.

The original plan for the Capt. Jacques Cartier and the John Cabot called for comparative fishing to start in April 2020 and conclude in December 2021, involving eight calibration experiments totalling 43 additional weeks of vessel time.

“The ongoing COVID-19 pandemic has impacted the coast guard as it has all Canadians. Refit schedules have been impacted due to restrictions on interprovincial travel and isolation requirements, delays in material deliveries, as well as provincial regulations regarding health and safety requirements,” DFO said.

Sea trials also raised concerns about access to the wet lab on board the Capt. Jacques Cartier.

The other required them to walk outside to get to the wet lab.

The coast guard committed to modifications.