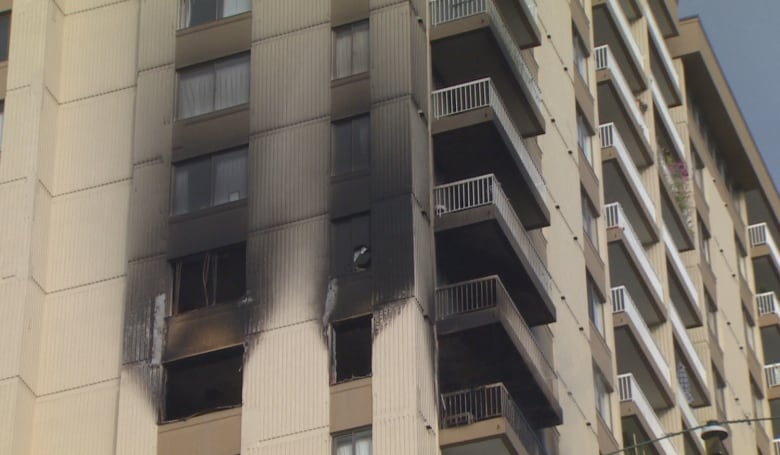 Neighbours carried an elderly woman down 15 flights of stairs to safety on Thursday evening after an apartment in their West End Vancouver building caught fire.

Firefighters were called to the building at Comox and Thurlow streets at about 6:15 p.m. PT after smoke and flames began billowing out of an apartment on the 14th floor, according to assistant fire chief Trevor Connelly.

Building resident Marieke Leliveld heard the fire alarm and was on her way out through the stairs when she noticed an elderly neighbour sitting on a chair outside one of the suites, unable to make it down on her own.

Leliveld told CBC News that she and two young men decided to carry her.

“I’m a little emotional about it still because we didn’t know almost if we were going to make it,” Leliveld said.

“We saw a lot of smoke come out of the building.”

She said the journey downstairs felt like it took an hour. Everyone made it safely to the ground.

Family members told reporters at the scene that the woman hadn’t left her apartment in three years.

Connelly said the woman was one of two residents who had to be helped out of the building.

Nobody was home in the apartment that caught fire and no one in the building was injured, firefighters say.

The flames had just started to penetrate the 15th floor and the standpipe system was failing when firefighters extinguished the fire, according to Connelly. He said it was unclear if there were working smoke detectors in the building.

Fire investigators have yet to determine what caused the fire.