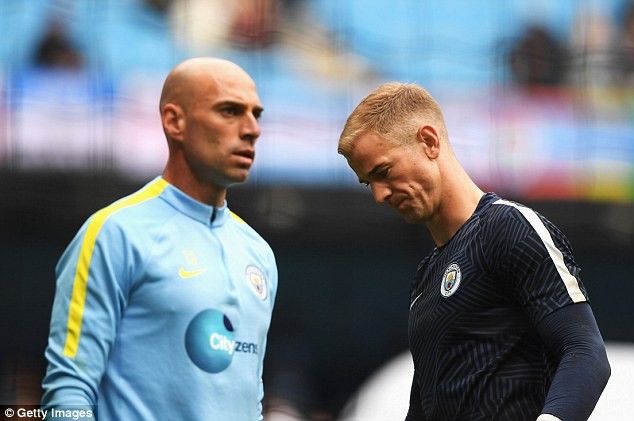 Jesus Navas and Willy Caballero will leave Manchester City following the conclusions of their contracts this summer.

Winger Navas is approaching the end of a four-year deal signed on his arrival from Sevilla in 2013, while goalkeeper Caballero is coming to the end of a three-year contract which he signed after joining from Malaga in 2014.

City have announced their departures along with that of left-back Gael Clichy.

Navas won the Premier League with City in 2014 and leaves with two League Cup winners’ medals having started 117 games for the club.

The 31-year-old Spaniard scored eight times in four seasons, the last of his City goals coming in a League Cup semi-final at Everton in January 2016. Willy Caballero will also leave City in the summer

Caballero made 48 appearances for City, including 27 under manager Pep Guardiola this season.

The 35-year-old Argentine’s most notable moment in a City shirt came at the 2016 League Cup final, when his penalty heroics helped to defeat Liverpool.

Caballero told the club’s website: “It’s been a privilege to play for Manchester City. “From the first day I arrived, everyone at the Club has made me feel welcome and I will always be grateful to them.

“To win the League Cup in such dramatic circumstances was special and it’s a day I will never forget.”