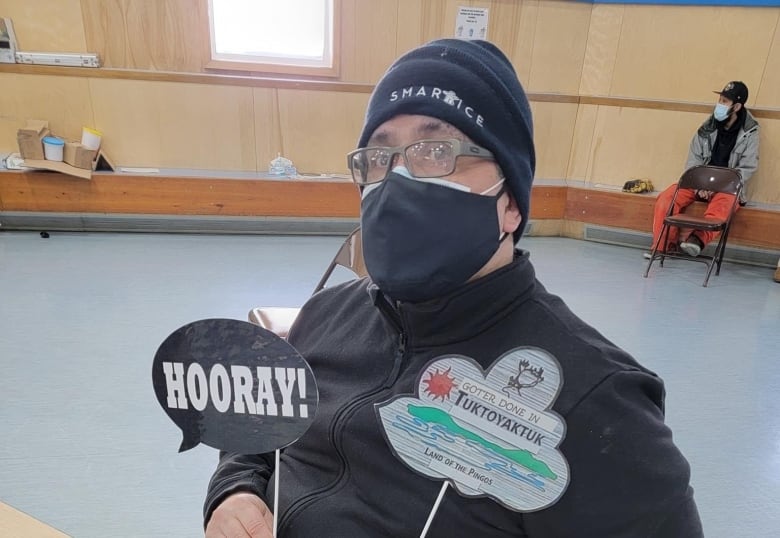 Jacob Lafferty travelled 2,000 kilometres with his father from their home in Tuktoyaktuk, N.W.T., to Edmonton to get surgery on his elbow.

But it never happened.

“We flew down Sunday, went for our appointment Monday only to be told that everything is cancelled,” said Lafferty’s father, Tyrone Raddi.

Lafferty, 17, is one of several residents in the Northwest Territories currently in this predicament as surgeries across Alberta are being cancelled due to record numbers of COVID-19 hospitalizations that are seeing patients transported to other provinces.

Raddi said it was nerve-wracking enough travelling from a small community that has never had a case of COVID-19, to a hotspot like Edmonton.

He had to book two days off work for the surgery, and his son, who is about to graduate in January, had to take time off school. Now, they’ll have to do it all over again, possibly on short notice.

Raddi said they’ve been put on an “emergency cancellation list with no guarantee that we are going to get in due to the high number of cases in Alberta.”

“I am lucky that I did have the time to take off.”

Alberta is facing soaring numbers of COVID-19 patients. As of Thursday, 226 of the 310 patients in the province’s intensive care units (ICUs) had COVID-19.

Hospitals buckling under the load have had to cancel surgeries for Alberta patients as well as those in the N.W.T. who rely on the province for specialized care.

“Having your surgery delayed can be extremely traumatising, particularly if you’ve been waiting a long time,” said Dr. Verna Yiu, president and CEO of Alberta Health Services, at a Thursday news conference.

“Delaying surgeries is something that we never want to do.”

CBC News reached out to the government of the Northwest Territories’ Department of Health and Social Services to get a better understanding of how many residents’ medical travel and surgeries have been postponed, but didn’t receive a response before this story was published.

Data from the Canadian Institute for Health Information shows that in 2019-20, N.W.T. residents were admitted to hospital overnight 955 times in the Edmonton area. The previous year, that number was 1,004.

Postponed surgeries and medical travel for N.W.T. patients in Alberta are happening at a time when the territory is facing its worst COVID-19 outbreak since the start of the pandemic.

As of Thursday, the territory’s chief public health officer said 26 people have been hospitalized related to the current delta variant-driven outbreak. Twelve have been admitted to the ICU in Yellowknife since the pandemic began.

Raddi said his son is still experiencing discomfort with his elbow and would like the surgery done right away.

He said he understands why it was cancelled, but feels the situation could’ve been communicated better. If he’d known about the possibility of a cancellation, he said he may have made a different decision about whether to risk travelling to Edmonton.

According to Raddi, the territorial government “needs to look after its residents instead of sending them down on trips where they know nothing is going to happen.”

“I really do think it was a waste of my time and my son’s time with them knowing nothing was going to happen … I think it has to be a little bit better planned out from both sides.”