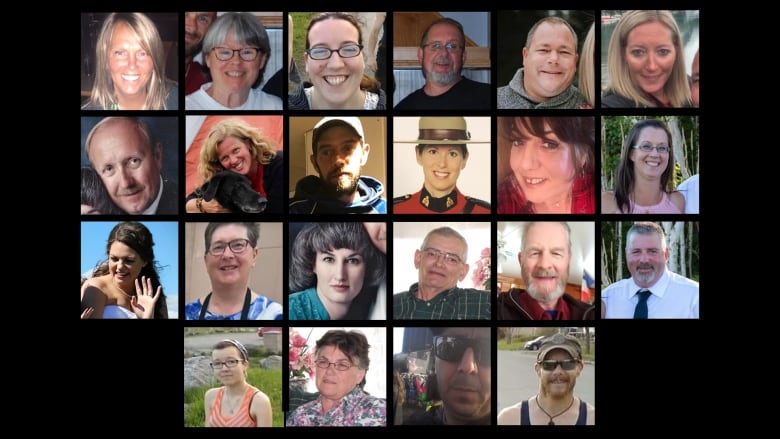 The partner of a man who killed 22 people in Nova Scotia last April confided in a friend that she feared the gunman had been going door to door searching for her during the violent rampage, according to an RCMP document summarizing statements to investigators.

Further redactions were lifted Friday in 20 documents related to the mass killing investigation, revealing Lisa Banfield told police she experienced “guilty feelings” that her common-law spouse might have gone to locations where she was potentially hiding out “and killed the people as he went along.”

“Lisa questions whether people would have died if she didn’t run away,” the documents said.

Gabriel Wortman killed neighbours, acquaintances and strangers over a period of 13 hours before he was shot dead by police at a gas station in Enfield, N.S., on April 19, 2020.

Investigators sought more than 20 search warrants and production orders to search properties, businesses, phone and financial records. In applications to do the searches, Sgt. Angela Hawryluk summarized information gathered in the case and requested that the documents remained sealed.

CBC and a consortium of media organizations applied for access to the records last spring and have been going through the court process ever since. Parts of the documents released Friday with approval from a provincial court judge had previously been released with redactions. Some portions remain blacked out.

Banfield told police about her concerns and relayed the same fear that Wortman had been searching for her during the rampage to Kevin von Bargen, a Toronto-based lawyer who was friends with the couple, according to a summary of his statement to RCMP by phone on April 21, 2020.

All references to von Bargen had previously been redacted from the documents. He told investigators he’d bonded with Wortman over their shared passion for restoring motorcycles after they connected through a group in 2017.

They were close, having stayed at each other’s homes, and exchanged thousands of emails.

Von Bargen told investigators he was shocked to hear about the killings and that Banfield had told him it “sounded like Gabriel was going around door to door looking for her.”

He had last talked to the shooter two days before the attacks about a shed extension and COVID-19. He told police that in the past month, they’d discussed the gunman’s plans to retire and how he had withdrawn his savings.

A few sections of his statement remain blacked out.

Van Bargen is not currently representing Banfield. But Banfield’s lawyers, Jessica Zita and James Lockyer, had objected to parts of his statements being released, arguing it invaded solicitor-client privilege.

The new sections released Friday include a summary for a caution interview Banfield gave to police on April 28, in which she appears to have elaborated on the events leading up the shootings in the rural community where she and Wortman spent time at their cottage.

Banfield explained that the previous night, the gunman had accused her of ruining their 19th anniversary when she became upset a friend hadn’t supported their plan to have a commitment ceremony the following year, according to the search warrant documents.

Though Banfield said she tried to apologize to her partner, imploring him that she was mad at their friend and not him, she told investigators Wortman still became enraged.

The documents detail how the 51-year-old denturist attacked Banfield after finding her in bed crying, pretending to be asleep.

The references to Banfield’s police statements don’t include any mention of prior conflicts or issues Wortman had with neighbours, whom she told investigators she barely knew.

But the records say she told investigators that leading up to that weekend, her partner had become increasingly paranoid about COVID-19, believing that he would die and that financial institutions would collapse. She said that motivated him to stock up on gas and rice and to withdraw half a million dollars in cash, which police later found buried amid the rubble of their property, one of several the shooter burned.

Banfield, her brother James (Jimmy) Banfield and brother-in-law Brian Brewster are all charged with unlawfully providing the gunman with ammunition.

A civil suit filed by the families of victims also alleges Lisa Banfield purchased some of the gas her partner later used to torch homes.

The claims have not yet been tested in court.

The search warrant documents describe Banfield telling investigators about instances where “little things … set him off.” In one case — which a neighbour later spoke publicly about — Wortman strangled Banfield outside.

Banfield told police she knew her partner cheated on her, and that he’d intentionally humiliate her around patients at the denture clinic where they worked together.

But he “always said things about hurting her family so she was afraid to leave,” the documents state.

That April night, Banfield said Wortman told her they were going to go to Dartmouth together, and she believed he had plans to kill people there, according to the documents.

The gunman restrained his partner, first by tying a cloth around her wrists and then with one handcuff, according to the documents.

He carried a flashlight and called her an idiot when she tripped trying to get away as he dragged her between their properties.

The gunman also “took Lisa’s shoes and threw them in opposite directions and said, ‘Now you can’t run, bitch,'” one application for a warrant states.

It’s unclear how or when Banfield removed the handcuff, but she told police she escaped after sliding open a divider in the replica police car that Wortman had outfitted to look like an actual cruiser. She said she escaped while Wortman was inside collecting a gun from the garage where they’re been drinking and Facetiming with friends earlier in the evening.

The ITOs — a type of document seeking authorization for a search warrant —  also detail where exactly Banfield told police she hid overnight: first in a truck and then under a tree.

“Lisa Banfield heard shots and thought Gabriel might blow the truck up and she left that hiding spot and eventually came across a tree with an exposed root stem and hid inside the cavity,” the document states. That section was previously redacted.

She told investigators she “could see a fire, hear voices and bangs and thought it could be Gabriel.”

Police picked Banfield up after she knocked on a neighbour’s door around 6:30 a.m.

The commissioners in a public inquiry have been tasked with looking at the causes, context and circumstances giving rise to the tragedy, as well as the police response and the steps taken to inform, support and engage with victims, families and affected citizens.

Their mandate includes looking at the role of gender-based and intimate partner violence as well as access to firearms.

Their final report is due by November 2022.