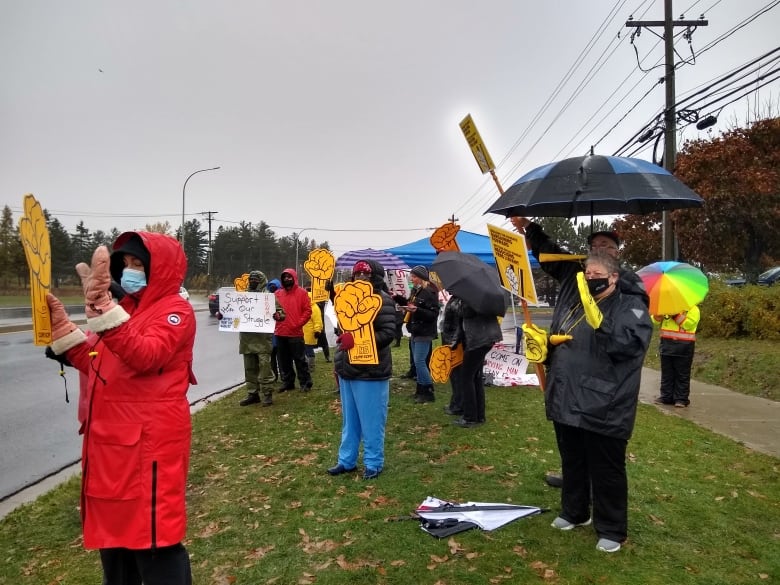 The New Brunswick government on Sunday locked out all non-designated employees in CUPE locals 1253 and 2745, including custodians, bus drivers, school library assistants and administrative support and a number of educational assistants as workers continue to strike over wages.

Schools across the province will move to online learning as of Monday, and it will remain that way until the end of a strike by Canadian Union of Public Employees members that began Friday.

“I regret having to take this step, partly because of the hard work CUPE members have done for us throughout the pandemic … because it confirms what we knew last week that we are entering a time of uncertainty,” Education Minister Dominic Cardy said Sunday.

Cardy said the decision to lock out the workers came because CUPE has proven to be “unpredictable” in its strike actions.

“CUPE has not provided us with accurate or up-to-date information about their strike plans as they affect the nearly 300 schools in our province,” said Cardy.

He said the education department was informed Friday morning about CUPE’s intention to suspend school bus routes, but were not informed of any other actions the union planned to take with the strike.

“On Friday morning it became very clear, as we saw people taking sick days and saying they weren’t going to be at work, that we’re actually going to see a broad impact on school operations inside the system,” said Cardy.

Cardy said locking out these workers eliminates uncertainty for parents and students.

Cardy said one of the major concerns with keeping schools open during the strike is the uncertainty of how many educational assistants would continue to work. Only 45 per cent of education assistants are designated as essential workers.

“If kids came to school with less than half the available EAs actually working, that would present an enormous challenge to the folks who are in the schools,” said Cardy.

“That wouldn’t be acceptable or safe in my view.”

Designated educational assistants have been placed on leave without pay, because they don’t have duties while students are learning from home.

Provincial president of CUPE 2745 Theresa McAllister said it’s odd the government is choosing to lock out workers after they began striking.

But her biggest concern is for the designated workers who are being laid off as a result.

“Mrs. Cardy and Higgs have taken the opportunity from those children that are going to have to do online learning and squashed all the support that they might of had, because he’s laying of those education workers who were willing, able and capable to help them.”

McAllister said she has heard from parents who will not have their children sign-on for online learning Monday in a show of support for CUPE workers.

“It is picking up a lot of steam and I thank them totally for their support,” she said.

“I will be on of those parents.”

CUPE responded to the lockout announcement, calling the move an attempt “to divide CUPE and create chaos,” according to a news release from the CUPE Centralized Bargaining Team.

The notice said the action will prolong the withdrawal of services and that a fair deal is most likely when “united.”

The lockout only incudes workers within the Department of Education and Early Development.

In-patient care and emergency services will not be impacted throughout the duration of the CUPE strike.

All elective and day surgeries have been cancelled, as well as all therapeutic services unless otherwise notified.

Patients should expect delays during the strike, and all visitation has been restricted.

COVID-19 assessment and vaccination clinics in Fredericton are closed. The assessment centres in Hartland and at Ropewalk Road are also closed.

The Vitalite Health Network announced Sunday it too will need to reduce services for the duration of the strike.

Some patients will be notified of postponed appointments, but they are asked to attend schedules appointments as normal if not otherwise notified.

All visitations are prohibited at the Vitalite hospitals.

River ferry services were suspended as of Saturday morning due to the strike.

“We understand the importance of the ferry system, especially in rural New Brunswick,” Mark Taylor, a spokesperson for the Department of Transportation, told CBC News.

“The strike is [impacting] ferry services that New Brunswickers count on.”

Taylor said ferry services are “working hard” to get operating again as soon as possible.