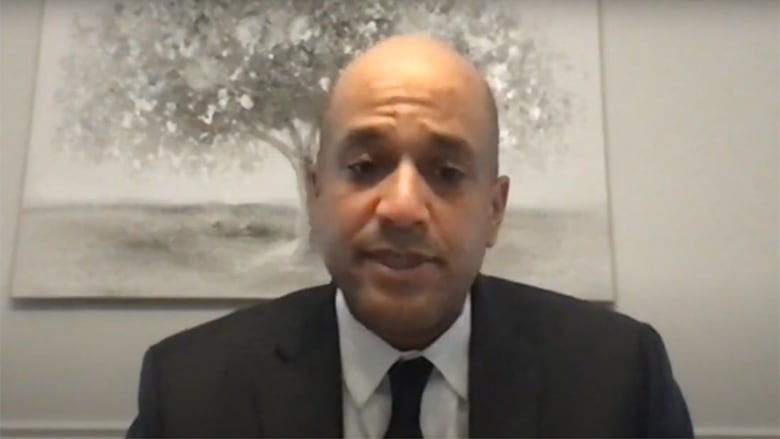 The doctor who was accused of breaking COVID-19 rules and being the source of an outbreak in northern New Brunswick last year plans to sue the province and the RCMP.

The lawsuit also alleges abuse of power, negligence, defamation, malicious prosecution and a breach of the doctor’s charter rights.

Ngola instructed them to begin the process in the Court of Queen’s Bench “to make sure that something like this never happens again,” Toronto-based lawyer Joel Etienne said during an online news conference.

Last Friday, the lawyers gave Premier Blaine Higgs one week to publicly apologize to Ngola for his role in the doctor being blamed for the COVID outbreak in Campbellton in May 2020 that claimed two lives, infected dozens and forced that northern part of New Brunswick back into the “orange” phase of recovery.

Instead, “what we witnessed was empty rhetoric, contradictory comments and political stunts and hijinx,” Etienne alleged.

Ngola, 51, has suffered for more than a year, Etienne and Moncton-based lawyer Christian Michaud said.

He was labelled by some as “patient zero” after he tested positive for COVID-19 shortly after driving across the border overnight to pick up his four-year-old daughter in Montreal because her mother had to travel to Africa for a funeral.

During a May 27, 2020, news conference, Higgs announced that a medical professional in their 50s had travelled to Quebec for personal reasons, “was not forthcoming about their reasons for travel upon returning to New Brunswick and they did not self-isolate as a result.”

Higgs never publicly named Ngola, but he blamed what was then a cluster of COVID-19 cases in the Campbellton region and a resurgence of the coronavirus in the province on the “irresponsible individual” who returned to work at the Campbellton Regional Hospital and treated patients for two weeks.

Ngola, who is from Congo, faced racist threats, was suspended by the Vitalité Health Network, was criminally investigated by the RCMP and charged for breaching the province’s Emergency Measures Act by allegedly failing to quarantine when he returned from Quebec.

After Crown prosecutors withdrew the charge last Friday, saying there was no longer a reasonable prospect of conviction, the defence said Higgs could no longer hide behind “outstanding provincial court matters” and called on the premier for a third time to “unequivocally apologize.”

Higgs told reporters he didn’t feel he had anything to apologize for. “It’s unfortunate that he took it personally,” he said. “I didn’t direct it. I didn’t name him.”

Although Higgs did not refer to Ngola by name, Ngola’s lawyers argue in the 27-page draft statement of claim that “he knew or ought to have known that Dr. Ngola’s identity and apparent health status had already been leaked to the public via social media prior to the press conference.”

Dr. Ngola’s is the first and only modern-day experience that a Canadian has ever had in relation to having to relocate because of a social banishment that was spurred on by a premier, his government, a police force, and social media.– Draft statement of claim

Higgs is not named as a defendant. The lawsuit names “Her Majesty the Queen in right of the Province of New Brunswick and Canada (Royal Canadian Mounted Police).”

The lawsuit seeks some form of restorative justice, continues to seek a public apology from Higgs, as well as the RCMP, and seeks an independent probe into the case to help prevent a similar situation from occurring in the future.

“Dr. Ngola’s is the first and only modern-day experience that a Canadian has ever had in relation to having to relocate because of a social banishment that was spurred on by a premier, his government, a police force, and social media,” the draft statement of claim alleges. He left his practice of eight years and moved to Louiseville, Que.

The action also seeks compensation and punitive damages, but the amounts are left blank on the draft statement of claim.

“Quite frankly, the issue is secondary to what is really important: the restorative justice measures we are seeking to make sure that something like this never happens again,” said Etienne.

Ngola’s lawyers have repeatedly called on Higgs to apologize to their client.

They first sought an apology last June after a private investigator they hired concluded Ngola “could not have been the first patient” and that his trip to Quebec was not the source of the outbreak.

In July, when they were told Ngola would not face criminal charges, they repeated their call for an apology.

Earlier this week, Higgs publicly challenged Ngola to waive his privacy rights so he can reveal what he says he knows about the doctor.

On Friday, he told reporters his position hasn’t changed.

“I would like for all of the information to be available to the public and let the public determine,” he said.

“If there’s a lawsuit and it continues, then that would be one avenue for all the information to come forward in every respect and so that will be fine.”

He does not regret his comments, he said.

“No, it was necessary to have everyone think about, ‘OK, what can I do differently?’ Because we had lots of people moving around, especially professionals in the health-care world that were travelling across borders,” said Higgs.

In the letter giving notice of action to the parties Friday, Ngola’s lawyers say they would “welcome any out-of-court discussions to determine if this matter can be resolved amicably.”