Mythical figures that may actually have existed 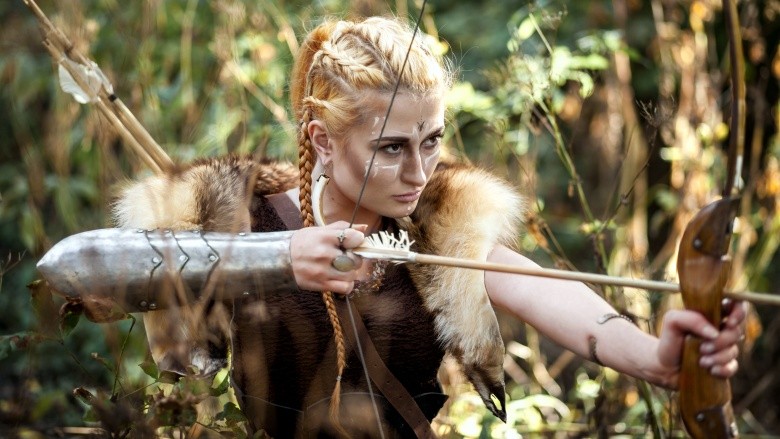 Tara Marie
Heroes and their stories come in all shapes and sizes, but the best ones are always larger than life. So much larger, in fact, that we’ve come to accept that they’re probably nothing more than legend. Or are they? There are some people and stories in history whom we assume are about as real as Superman and his magical exploding planet, but were likely not only real, but a thousand times cooler than Old Blue.

The Viking legend of the Berserkers
Shutterstock
The Vikings are basically the go-to stock characters for the most manly men who ever manned, right? All the Vikings did was go around killing and looting and pillaging and … well, that was mostly it. The Vikings were fierce warriors who went all over the place — including America — and had gods so sweet, we’re continuing to make movies about them to this day. But sometimes, normal Vikings aren’t enough — that’s where the fabled berserkers would supposedly come in. Fueled by Odin, berserkers were more monster than men — able to cut down whole hordes of soldiers with a single bout of rage. Basically, they were ancient supervillains, the Viking equivalent of Bane. Which means they definitely didn’t exist, because no human that strong could ever exist, right?

Wrong. Berserkers actually existed, and were super strong, too. However, sadly, it wasn’t because a one-eyed thunder god filled them with rage (probably). Most likely, their awesome strength came from massive amount of drugs and alcohol. Ever watch a bad superhero movie where the cops talk about the superhero being on drugs? That’s because it really works!

But don’t think just because you like to drink, you too can be a berserker. The practice was actually outlawed in 1015, and nobody’s bothered to lift the ban. Even countries that don’t technically outlaw berserker-dom definitely ban the stuff berserkers do when they get drunk. So just, don’t.

The Legend of the Amazons
Shutterstock
Speaking of other places that we know exist, how about the Amazon? You know, like the Amazon Rainforest. Done. This entry was small, right?

Okay, no. The mythical Amazons were a fierce band of warrior women who may have been immortal, which is why they made Wonder Woman one and not, you know, something else. Heck, they may have ruled the world for a spell, before men took over. But this didn’t actually happen, right? Some people so disbelieve the Amazonian myth, they even insist that what people think were Amazon women were just beardless men. Because back then, men without beards were weird and spooky.

But no, they existed. In the early 1990’s, archaeologists discovered 150 graves filled with ancient Sauromatian women (near what’s now Kazakhstan). Many of these women were, as the Smithsonian put it, “anything but ordinary.” They were buried with their weapons, sometimes with other people’s weapons buried in them, and they were mostly tall — 5’6″ on average, very tall for back then — which displays that not only were there fierce, badass warrior women back then, but they were literally Amazonian in appearance.

Sure, we don’t have actual proof that they were immortal, but we do know for a fact that the Amazons were just plain amazing warriors, as documented in various historical texts (and also awesome poems involving giant monsters), and the place they lived was a real, actual location. Does that mean Wonder Woman was real too? Give or take one American leotard, probably! Looking at it that way, not only could Batman v Superman be considered historical fiction, but DC might even be able to cook up a crossover with 300!

The Myth of the Great Flood
Shutterstock
Noah’s flood is one of the most famous myths ever. It tells the story of a huge flood coming, sent by God, a catastrophe that one man, Noah, was warned about. He gathered his family, animals, and plants, and saved them from the coming disaster, like a Stone-Age Roland Emmerich movie. But Noah’s is not the only Great Flood myth around — there are stories of one in almost every culture. For instance, perhaps the earliest written story ever found, Agamemnon, features a great flood that resembles Noah’s to such a strong degree that, if hotshot lawyers had existed back then, the Bible might have been nailed for copyright infringement.

Of course, there’s a good reason for Great Floods existing everywhere. And that’s because it really, actually happened! In the Black Sea area, a huge flood occurred that had the force of two hundred Niagara Falls at once. It utterly decimated the land, making it slightly less mythical than the flood of Noah because it didn’t destroy the entire world. However, if you’re an old-timey dude, and a flood covered all the land you could see and had ever known, what’s really the difference at that point?

King Midas
Shutterstock
The story of King Midas is a cautionary tale about the lust for wealth. It’s about a king who gains the ability to turn everything he touches to gold … and destroys his life with it (ever try eating a solid-gold sandwich? It’s not fun, or possible). So you might be wondering why the image we’re using for this entry has absolutely no gold in it at all. That’s because that image above is the real entrance to the real-life King Midas’ tomb. The dude actually existed.

Now, granted, he didn’t turn things to gold by touch … probably. But he was an actual king who lived about three thousand years ago, near where Turkey is now. No one is exactly sure how the myth of his golden touch came about, but some believe it was a story explaining the royalty’s gold-looking apparel. Or heck, it could’ve just been a morality tale. All we know is, the dude was real and, if we had the chance to get the Midas Touch … we’d definitely take it. Just, without the food-into-gold thing. We like food too much.

Atlantis
Shutterstock
Atlantis is one of the most popular myths of all time — a beautiful, technologically advanced paradise, torn down and destroyed by the waves, ruined for the rest of time. We know the Atlantis myths thanks to the Greek philosopher Plato, but here’s the thing: that mythical land he was describing may actually have existed.

Many who investigate the cause and creation of mythical lands believe that Atlantis is actually a retelling of what happened to the Greek isle of Santorini, a beautiful island that was completely destroyed around 1600 BC. The way that Plato describes the island matches that of Santorini perfectly, right down to the color of the rocks. His tale of the destruction involves lightning, thunder, and fire, which was obviously an exaggeration … right? After all, what could have happened there that could match the utter ferocity of the destruction in Plato’s tale? Oh, nothing much — just a humongous volcanic explosion. You know, those things that involve lightning, thunder, and just so, so much fire.

That eruption, and the uber-tsunami that it came bundled with, destroyed most of Santorini, taking with it the Minoan culture that was apparently highly advanced for its time. Oh, and maybe the best part? Not all of Santorini is below the waves. This means that you can hop on a plane and visit the mysterious sunken island of Atlantis … or, the half of it that’s still above water, at least.

The expedition from Hyperborea
Shutterstock
There’s a bunch of stories similar to the Hyperboreans. Know how in The Lord of the Rings, there’s an ancient race — wholly above and pure — that are smarter than everyone else and have special powers? The land the elves come from is a beautiful and perfect land of sunshine and light, practically perfect in every way. Elsewhere, there’s Atlantis, a beautiful and perfect, technologically advanced land where travelers journey from, bringing stories and knowledge? Hyperboreans are another tale of perfect creatures from a magical land. Except, of course, unlike angels and elves and Atlanteans, Hyperboreans were actually real!

See, the Hyperboreans were known to the Romans as living in a beautiful and perfect land. There’s some erroneous information, but examining all of it, it turns out that the Hyperboreans were — of all possibilities — Chinese. Yeah, instead of being any weird and different type of people that we don’t know about, the mythical Hyperboreans were actually just the Chinese travelling near the Arctic Circle, before heading down into Rome. So, if you’re Chinese, just know that at one point, you were considered a powerful and mythic type of people from a beautiful and perfect land. If you can’t hang your hat on that, what can you hang it on?

The life and death of Iram of the Pillars
Shutterstock
You ever hear the story of Sodom and Gomorrah, about a large and beautiful city that, due to its sin and terrible people, was utterly destroyed by fire sent by the wrath of God? Iram of the Pillars is basically that, but instead of being found in the Book of Genesis, it’s found in the Koran. It was a center of danger, iniquity, and djinn (also known as genies) — which are like demons, but also angels, but also fairies.

Oh, and unlike the story of Sodom and Gomorrah? Iram of the Pillars has actually been found. See, there’s another lost city, called Ubar. (yes, Uncharted 3 players, that place. It’s real, it’s been found, and Nathan Drake is totally real.) It was a frankincense-heavy trade post located in the middle of the Rub’ al Khali (AKA the Empty Quarter), which is the emptiest and most inhospitable place on Earth. It’s a huge desert, like something out of a horrifying fairy tale. It turns out that Ubar and Iram of the Pillars are the same city, but one has a nice shiny coating of myth on it. No word yet on whether or not God destroyed Ubar because its people wouldn’t stop being wicked, but we’re sure archaeologists are working on it.