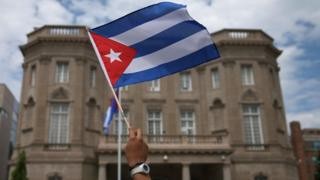 It was not immediately clear what had happened, with spokeswoman Heather Nauert saying there were no “definitive answers about the source or cause”.

One government official quoted by Reuters said that some staff had suffered hearing loss.

Cuba’s foreign ministry said it was investigating the allegations.

It called the expulsion of its staff unjustified but said it was willing to co-operate with Washington to clarify what had happened.

“Cuba has never, nor would ever, allow the Cuban territory to be used for any kind of action against accredited diplomats or their families,” the ministry said.

It was suggested the hearing loss could have been caused by some kind of sonic device placed outside the diplomats’ homes, emitting inaudible sound waves that can cause deafness.

While they were not life-threatening, she revealed that a number of people had been brought home to the US as a result.

Ms Nauert said the government was taking it “very seriously, and there is an investigation currently under way”.

It is understood that the two expelled Cuban diplomats left Washington DC in May, the BBC’s Will Grant reports from Havana.

Washington and Havana only re-established ties in 2015, following 50 years of hostilities between the two countries.