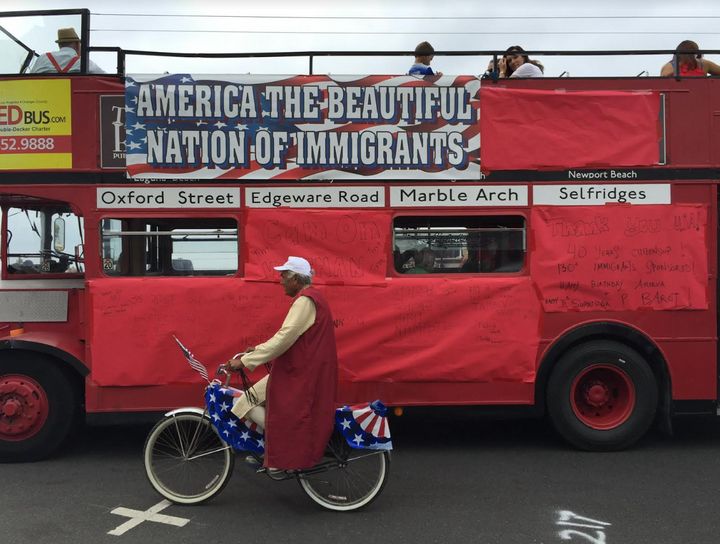 It was the summer of 2016. The presidential election was months away but the fever pitch of divisiveness and overt anti-immigrant racism from the Donald Trump campaign was in full swing. In my conservative hometown of Huntington Beach, California, MAGA flags flew high and Trump banners festooned million-dollar houses. Going back home to visit felt dreadful.

It was at this moment that my father decided he wanted to manifest his vision of sponsoring an immigrant float in the annual Huntington Beach 4th of July parade. Billed the oldest and largest parade west of the Mississippi, the event can draw half a million people to my hometown in a patriotic display like few others. Wedged somewhere between the marching bands and baton twirlers, the decorated military veterans, the classic convertibles with politicians perched atop their back seats, the Shriners with their fantastic little hats and tiny cars, and the NRA members, my Dad, originally from India, came to the U.S. when he was 30, dreamed of a giant immigrant float that would proudly proclaim his love for his adopted country.

My family thought it was a terrible idea.

I love Huntington Beach. It is home. From taking part in teddy bear picnics in Ms. Sweet’s first grade class, to my friendship with Marianne, the librarian at the Main Street branch, who introduced my teen self to the joy of travel memoirs, Huntington Beach made me who I am. Were there not-so-wonderful things about growing up there as a brown girl with immigrant parents? Sure. There was the cashier at the grocery store who, between ringing up the milk and the bananas, asked me whether I had accepted Jesus Christ as my lord and savior. I replied, “I am sure he was good guy, but no.”

Or the kid from my school who backed into my car and then jeered at me and my sari-clad mom before asking for my license and registration, “if I had any.”

Or the time when, years after leaving, I drove past my high school and a blonde teen in a big red truck pulled out and screamed from the window, “Go home Paki!” which confused me because I was home, and that was my high school, the one whose marquee had once displayed my name as student of the month. Who did she think she was? And why are racists always so bad at geography?

I love Huntington Beach, warts and all, but I did everything I could to deter my father from serving us up as targets on an immigrant float in the summer of 2016. The cultural and political moment felt terrifying, and there was an undeniable uptick in racist attacks across the country. I pleaded with Dad to save this idea for another day, another year ― perhaps another lifetime.

He would not budge.

We’ll be fine, he insisted. All he wanted to do was “thank America” for what this country had given him. Who could have a problem with that?

There was, however, more going on under the surface. He was dealing with the unbearable grief from the loss of his only son, my brother, just two years earlier. He needed to find something to feel good about as he took stock of his suddenly shattered life and the things that had once given it meaning.

The float was much more than a gesture of patriotism. It was a way to make sense of the whys and wherefores of a life that took him across oceans and enabled him to sponsor all of his family and their families and their families’ families to settle in the U.S. At that time, we were up to about 200 people who had become U.S. citizens because of the lives of him and my mom ― lives now punctuated by unbearable grief.

So we decided, amidst our legitimate concerns about safety, that we had to support him. We had to find a way to make it happen.

All that was available at that late stage was a big red double decker party bus, the kind that people use for drunken bachelor party pub crawls. We found a way to cover up the giant photo of the chesty blonde barmaid serving jugs of frothy beer, and we proceeded to decorate the immigrant float.

We invited relatives who lived in the area whom my parents had sponsored and brought to this country, as well as local neighbors and friends who were immigrants from other countries. We printed little leaflets that read, “Thank You America” on them with blurbs about the people on the float, what country they were from, and why they were thankful to America. We wanted to remind people that unless you were indigenous, you came from somewhere else.

A few days before the parade, local police contacted Dad because someone posted online about a “big immigrant bus” in the parade and they wanted to question him about what he was planning to do. They tried to dissuade him from moving forward, saying that they could not make any promises about our safety and that it might be better to cancel the immigrant float. Dad refused. He reassured them that a local friend who was a retired officer would accompany the float as security. They acquiesced and warned us to be careful and be hyper aware of all of our surroundings and happenings.

And so on the morning of July 4th, 2016, under sunny skies, looking out at the endless blue of the Pacific, in the pre-parade float lineup on Pacific Coast Highway, behind a horde of energetic young gymnasts, Dad’s immigrant float made its debut.

Giant banners wrapped the bus, proclaiming in red, white and blue, “Thank You America,” and “Nation of Immigrants.” A huge garlanded portrait of my brother hung at the back end of the bus ― he brought up the rear and watched our back. Dad simultaneously paraded his thanks and his grief. Both floors of the bus were filled with family and friends from all walks of life, from all corners of the world, and they waved American flags and flags from their countries of origin.

The float looked like America. The float was America.

With good friends on either side of the bus whose sole job was to look out for threats, and a heightened sense of anxiety twinned with excitement as we sat atop the bus, we turned the corner into the heart of Huntington Beach, the intersection of Pacific Coast Highway and Main Street, and held our breath to see how we would be received by the throngs of parade goers.

We were a hit.

It would take a few beats before people could take in exactly what this float was all about, but once they did, the cheering and clapping overwhelmed and warmed our hearts. People of all ages and backgrounds would run up to the float and excitedly share with us where they were from, or when their grandparents came to this country, and how thankful they were to see a float like ours.

We saw people read the banners and their faces would instantly transform, sometimes with tears, and the clapping would commence. We provided a large swath of butcher paper on the side of the bus and passed out Sharpies for people to write messages on the float and tell us where they were originally from.

My favorite reaction was a large, shirtless, beefy young man who came running up to the float, his face reddened from too much sun, or beer, or both, and screamed in a thick eastern European accent, “I love you! I love you! I love you!” and blew us kisses as we passed by. It was my highlight of the day.

Our Thank You America Immigrant Float rolled its way down the parade route without incident. And of course, Dad was right. All he wanted to do was thank America, and remind people this was a nation of immigrants, during a time when some people were doing everything they could to pretend that it wasn’t. It turned out nobody had a problem with that.

Did we occasionally spy a limp thumbs down as we passed by? Sure. But the avalanche of positivity and acceptance that greeted the immigrant float made such moments virtually imperceptible in that sea of fluttering flags and cheering humans.

When we tipped the driver at the end of the route, he expressed his appreciation for us. “I usually drive around a bunch of drunk people and take them from bar to bar,” he told us. “But today, I felt like I did something that mattered ― something that I was proud of ― and I’d be honored to do this again any day for you all.” It was a special moment to crown all the special moments that came before it.

I’ve been thinking about our immigrant float a lot lately ― when a white supremacist opened fire in Buffalo, when militia members were arrested on their way to disrupt a Pride celebration, as the highest court in the land marches into our bodies and our bedrooms, amidst hearings that show us how easily lies can lead to insurrection. The divide in our country between neighbors, families and friends seems to grow wider every single day. I felt that perhaps the window for an immigrant float rolling down Main Street in Huntington Beach has been shut forever.

I brought it up to my Dad. “Imagine doing an immigrant float like that now? We could never do that today!” I said. “We’d have rocks thrown at us, or worse.”

He immediately shook his head, and said with certainty, “No, it would be okay. Most people are good and decent. We would be fine.”

I stared at him in wonder, in bemusement, in confusion, vehement in my disagreement. I don’t know what it is like to be an immigrant. To leave everything you know and come to a place that is not yours, often with nothing lining your pockets but debt. To have hope and faith in perfect strangers, and trust that it will all work out ― that it will all be okay. To believe that help will be on the way if you need it, even if you don’t know it. It is a leap of faith that crosses the boundaries of my imagination. My father’s belief in our hometown, my father’s faith in the people of this country, his belief in the goodness of his neighbors, his ability to build bridges even with the ones who fly blue lives matter flags, even with the ones who are anti-vaxxers, is something that is hard for me to understand.

I wish I shared his certainty that most people are good and decent. I wish I could easily believe that we will all be fine.

I wish I could see America through his immigrant eyes.

Dipti S. Barot is a primary care doctor and freelance writer in the San Francisco Bay Area. Follow her on Twitter at @diptisbarot.

Do you have a compelling personal story you’d like to see published on HuffPost? Find out what we’re looking for here and send us a pitch.