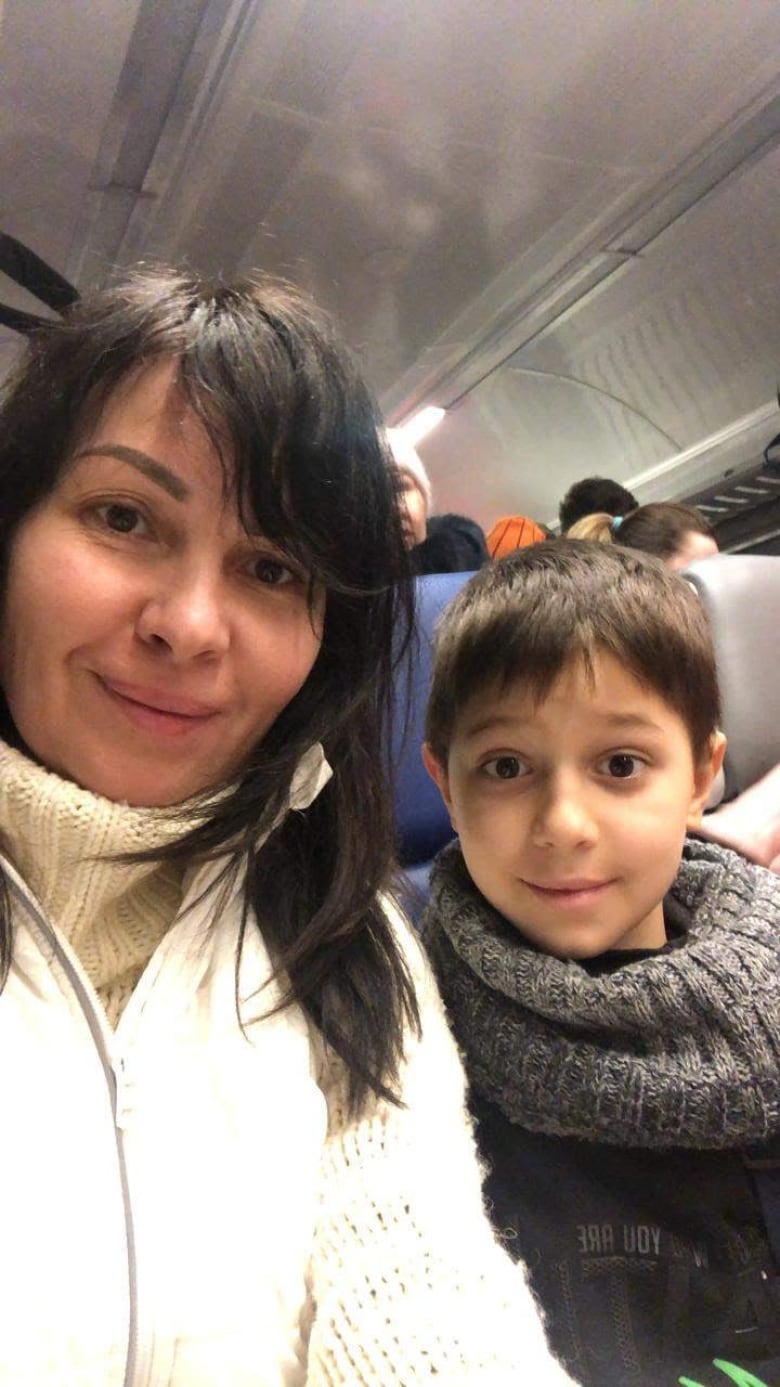 The war in Ukraine forced Lina Borets and her seven-year-old son, Tymur, to flee their home city of Dnipro on a commuter train earlier this month. When it skirted too close to Russian forces, she and other passengers were told not to use their cell phones and all the lights were turned off to avoid detection.

“I told him that it was time to sleep,” she recalled in an interview from an apartment unit in Wroclaw, Poland, where they are currently sheltered by a Polish family. “He believed me because it was dark outside.”

Borets has not explained anything about the war to her son, instead pretending they are on vacation.

“I didn’t want him to pass through that trauma,” she said, though she is sure he must have questions about why his father, who stayed behind in case he is called to fight, has not come along.

The pair applied for a tourist visa to come to Canada with the assistance of her husband’s aunt, who lives in Vancouver and helped get important papers like birth certificates translated and certified. With their documents all submitted, they’re now anxiously awaiting a response, which can take up to 36 days.

But there is a new process, which was introduced by Immigration, Refugees and Citizenship Canada on Thursday, that would potentially allow Ukrainians to be in Canada in as little as two weeks. The emergency immigration program would let Ukrainian refugees stay here for up to three years, and apply for open working permits.

“It’s actually a very exciting response that Canada is looking to offer visas, short-term visas, to Ukrainians,” said Janet Dench, the executive director of the Canadian Council for Refugees.

But her organization is hoping some of these measures created by the Canadian government to help Ukrainian refugees could also be applied to the myriad other crises around the world.

Dench says it would be good for the government to have a framework with objective criteria for all refugees instead of “being responsive based on a criteria such as what gets most media coverage or who has the best political connections in Ottawa to get the government to respond.”

The hope for more attention was echoed by several Afghan families stuck waiting in Islamabad, Pakistan, many since October. Thousands of Afghans fled after the Taliban took over when the U.S. withdrew its troops from the country last August. About 40 families are living in limbo in that city, waiting to come to Canada.

“Now we’re having a bad time, and nobody’s there for us,” said Mohammad Nasimi, who is living in a single hotel room with his wife and six children.

Nasimi worked with a bomb-detection crew for Canadian Armed Forces for several years, sent ahead of diplomatic delegations on roads where the Taliban were likely to have laid explosives.

“Working with the Canadian Armed Forces and the International Security Assistance Force at that time was risking, every second, your life,” he said, recalling that when he spoke with his parents at the time, they would tell him, ‘We never, ever thought that you’re going to come back home.'”

Nasimi and his family crossed over into Pakistan in October, fleeing for their lives, fearful that the Taliban could seek revenge. But they and the other families don’t feel safe in Islamabad, either.

“[Pakistan] was encouraging the world to recognize Taliban,” he said. “Why would you say that? How can you recognize people who slaughtered human beings?”

Like many others, Nasimi’s family has already completed much of his paperwork, and gotten mandatory fingerprint ID and retinal scans done. He said the Canadian embassy has referred him to Pakistani officials for exit interviews before he can fly to Canada.

It was the same for Asad Ali Afghan and his family, who are renting a small apartment unit in Islamabad, worried the scarce funds he escaped with will run out before authorities in Canada and Pakistan cut through the red tape.

Help on the way, Ottawa says

The federal government said it is not buckling under the strain of fulfilling obligations to Afghans and Ukrainians simultaneously.

But since August of last year, just 8,815 Afghans have arrived in Canada. And according to the immigration department, 9,000 Ukrainians have come to the country since just the start of January, more than a third of them since Russia’s invasion.

“This is the kind of thing where the competing crises around the world demand that we respond to both,” said Immigration Minister Sean Fraser in an interview with CBC News.

The department also pointed to differences between each group. In a statement, it said a number of factors are out of its full control on the Afghanistan matter, such as the lack of a safely functioning airport in Kabul.

Fraser also says there are difficulties in some of Afghanistan’s neighbouring countries that can result in obstacles to helping people leave.

“To the extent we can continue to work with our partners in the region, be it Pakistan or others, we’re going to continue.”

Meanwhile, in a statement, the Canada Employment and Immigration Union, which represents Immigration Canada employees, also pointed out Ukrainians and Afghans are not necessarily using the same streams to arrive here.

WATCH | Canada has fast-tracked entry to Canada for Ukrainians: Ukrainian refugees will be allowed to stay in Canada for up to three years under a new emergency immigration program that some advocates argue should’ve also been provided to Afghan refugees. 2:08

“Whereas someone coming from Afghanistan was automatically filtered through the Refugee Program, Ukraine is seeing much more uptake of family reunification and temporary residency requests,” it said.

It also noted Canada has the third-highest population of Ukrainians outside of Ukraine. “Thus many have visited family members or may have already been an applicant. These persons do not need to repeat the whole process, so the landing is much faster.”

But the union warned of future bottlenecks once arrivals through these streams come to an end, and more Ukrainians start having to go through the refugee system.

“We may end up with a situation similar to the one that happened in Afghanistan,” it said.