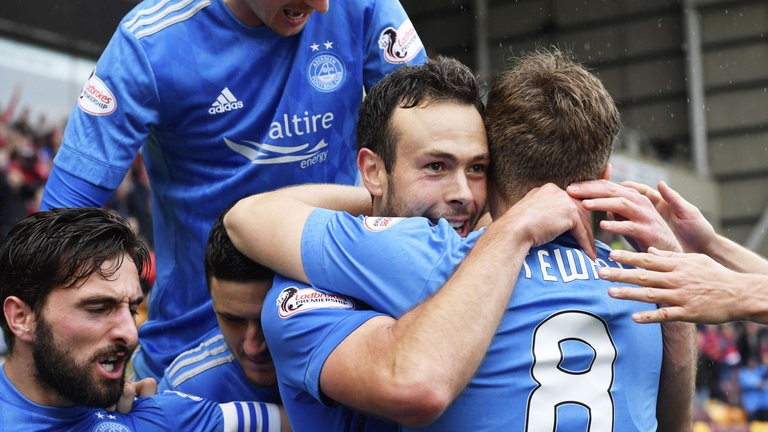 Andrew Considine exacted instant revenge for Aberdeen against Motherwell after netting the only goal in the second meeting between the teams in three days.

Considine scrambled home from close range in the 57th minute as the Dons atoned for their 3-0 Betfred Cup quarter-final defeat at Fir Park on Thursday night.

Dons boss Derek McInnes admitted his side had failed to lack the aggression and intent of their opponents in the first match of the double-header and there was no shortage of either from both teams in the rematch.

McInnes made three changes, installing a new-look central defence of Kari Arnason and 20-year-old Scott McKenna, and moving Anthony O’Connor alongside Greg Tansey and Graeme Shinnie in central midfield. Aberdeen sacrificed width with Gary Mackay-Steven dropping out of the squad, and Ryan Christie and Kenny McLean tasked with supporting striker Stevie May in advanced midfield roles.

The visitors looked far more solid and played much of the opening quarter in Motherwell’s half. May shot wide after risky play from Motherwell defender Cedric Kipre and Considine threatened with two headers.

Motherwell grew into the half, though, and finished it on top with Louis Moult, Carl McHugh and Peter Hartley all off target with half-chances. Joe Lewis, who had a night to forget on Thursday, made one first-half save from Arnason, who turned Gael Bigirimana’s corner towards his own goal.

The Dons goalkeeper made the first save of the second period, pushing Chris Cadden’s drive behind his near post, but Aberdeen soon got themselves in front after a move down the right wing. May helped on Shay Logan’s cross and Trevor Carson did well to push Christie’s back-heel on to the post, but Considine was on hand to tap home the rebound.

Stephen Robinson wasted no time in freshening things up, introducing Elliott Frear and Alex Fisher in like-for-like swaps, but Aberdeen kept the hosts at bay and the Motherwell boss brought on the attack-minded Craig Tanner for deep-lying midfielder McHugh in the 71st minute.

Frear got in behind the visiting defence but could not find Tanner and McInnes responded by going five at the back and swapping striker May for holding midfielder Dominic Ball.

Carson kept Motherwell’s hopes alive by saving from substitute Greg Stewart after the ball had bounced over Kipre and the hosts subjected Aberdeen to a barrage of late pressure.

Moult looked to have been bundled over in the box by Logan following a corner and soon saw a free-kick deflected over the bar, before Hartley volleyed over from another corner as Aberdeen survived.