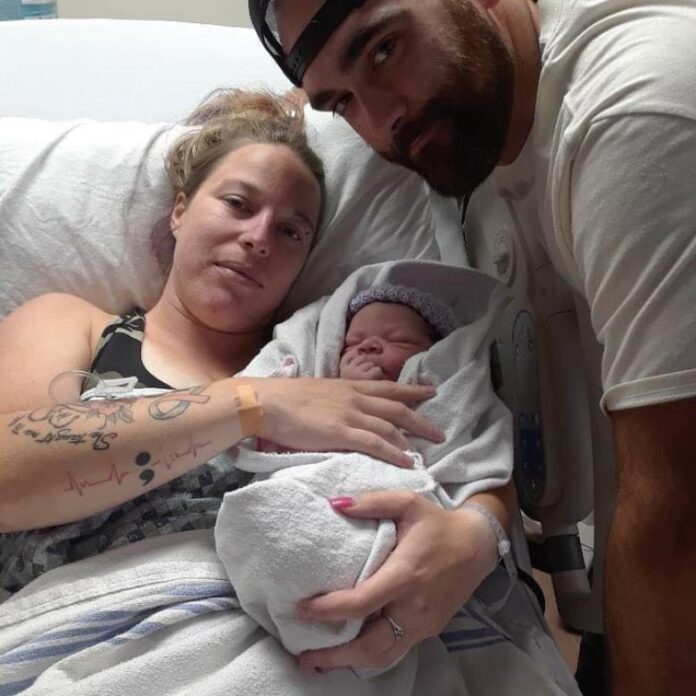 Grayson Wicks was born in late August after a chaotic labour that Earle says highlights the struggle some families have faced in the wake of an obstetrical closure in Gander. She is joining a growing chorus of voices — including staff at the hospital — who are advocating for the unit to reopen, despite a recommendation to close it for good.

“After being in so much pain and just not having any kind of medication or anything, and the worry of if something were to happen with me or him … so much was going through my mind,” Earle said from her home in Badger’s Quay, in New-Wes-Valley on Newfoundland’s northeast coast.

In the lead-up to her delivery, Earle went into false labour. With Wicks behind the wheel, the couple made the white-knuckle 2½-hour drive from their home to the hospital in Grand Falls-Windsor. They passed a hospital on the way in Gander because the obstetrical unit was closed.

Wicks said they veered into Gander hospital and were told Earle was too far along to get an epidural.

“So they were getting everything ready to deliver, they thought that was the time,” said Wicks. “That’s when everything went to shit.”

Wicks said they were told the hospital in Gander didn’t have the tools they needed in case something went wrong in the delivery. So they rushed Earle in an ambulance an hour away in Grand Falls-Windsor. The baby was born a short time later.

“If it’s really worth them putting people’s lives at risk to shut it down, I guess that’s what they have to do,” Wicks said. “But I think most people would prefer they not do that.”

For years, Central Health has struggled to recruit and retain staff to keep the obstetrical unit in Gander open without diversions. Pregnant women were told to go to Grand Falls-Windsor for stretches in 2013, 2016, 2017 and 2018.

A recommendation in the Health Accord — a government document outlining a blueprint for redesigning the delivery of health care in the province — suggests that diversion to Grand Falls-Windsor should be permanent, with one obstetrical unit for more than 90,000 people spread across a wide swath of geography spanning hundreds of kilometres.

A decision is expected to be made on the future of the unit in the spring, when the new provincial health board is in place.

However, advocates fear the writing is already on the wall.

CBC News has obtained a letter through an access-to-information request with 16 signatories — ranging from the chief of emergency medicine to pediatricians and family doctors — denouncing the possible closure.

“We believe that this move is an injustice to the people of the region and is already having a negative impact,” the doctors wrote.

“Furthermore, we are fearful that if services are not restored to James Paton Memorial Regional Health Centre, there may be devastating consequences.”

The doctors said removing one of the largest birthing centres in the province “flies in the face” of the principles of the Canada Health Act, which ensures access to universal, comprehensive and accessible health care.

“We have seen first-hand what happens to those who are unable to relocate, and find themselves in the throes of labour unexpectedly, showing up at the doors of [James Paton],” the letter said.

Since April, at least six babies have been born at the Gander hospital because their mothers were unable to make it to the other hospital in Grand Falls-Windsor, about 100 kilometres away. (That number doesn’t include the period during a state of emergency this summer when Grand Falls-Windsor was under threat of a forest fire.)

“However, we do not believe that our ineptitude at appropriately recruiting and retaining staff is an excuse to make the people of the region suffer.”

‘We have tried our best’

Andrée Robichaud, CEO of Central Health, said it will not be her decision as to whether the labour and delivery unit will reopen.

In an interview Wednesday, she acknowledged issues with recruiting and retaining doctors.

“We have tried our best and maybe that’s not good enough, I will admit that,” Robichaud said.

“But I think that the senior team in Central Health and our team on the ground in James Paton have done the best they could do in terms of recruiting and I think that it’s up to the [provincial health authority] to see where this evolves.”

Robichaud said a steering committee that was formed to make a recommendation to the new health authority on a centre for aging and obstetrics was recently disbanded.

The decision was made because the conversations were “divisive” and “polarizing,” she said.

However, Robichaud was clear the unit will not reopen until a final decision is made in April, citing mass staff shortages, including a 40-per-cent nursing vacancy rate and an overwhelmed emergency room.

“To re-establish a service at this point would not be fair to the people that are providing services at James Paton Memorial,” she said.

‘My first thought was horror’

A small group of retirees in Gander came together in 2021 to research the Central Health region and provide their findings to the Health Accord task force.

Losing the obstetrical unit in Gander was not one of conclusions they came to in their discussions.

“To drive from one corner to another in a winter storm could have a lethal effect on a pregnancy.”

Sandra Kelly — a former nurse and politician who served as Gander mayor and a provincial cabinet minister — said she fears other specialists will begin to leave Gander as a result of the labour and delivery closure.

Without the need to provide post-natal care, Kelly is concerned that pediatricians will be next.

“My fear is if this decision is made around [obstetrics] to take it out of Gander, we are going to lose [obstetrics] and gynecology and pediatricians,” Kelly said.

“If they leave Gander, some will even leave the province. We could lose as high as four to five specialists, and this province cannot afford to do that now.”

Robichaud did not dispute that possibility.

“When you dismantle a service — and I’m not saying it will be, that’s not my decision and a decision that the [provincial health authority] will make — there’s always a danger to lose professionals.”

What about the midwives?

For expectant mom Natalie Rideout, the closure has made her uneasy.

She has had one healthy pregnancy before, and had hoped to use a midwife throughout her second birth.

Gander is the only town in the province with midwives. But without a labour and delivery unit, they cannot follow women through to the end.

“They are wonderful women, very supportive,” Rideout said. “But unfortunately because we have to travel to Grand Falls they can’t guarantee they will be there for the delivery.”

An internal Central Health briefing note from August 2021 stated midwives were concerned the midwifery program would not be sustainable should the move to Grand Falls-Windsor become permanent.

“We know that the population is actually growing. Being five minutes from an airport, it’s just a no-brainer, really, to keep this unit open and accessible to women.”