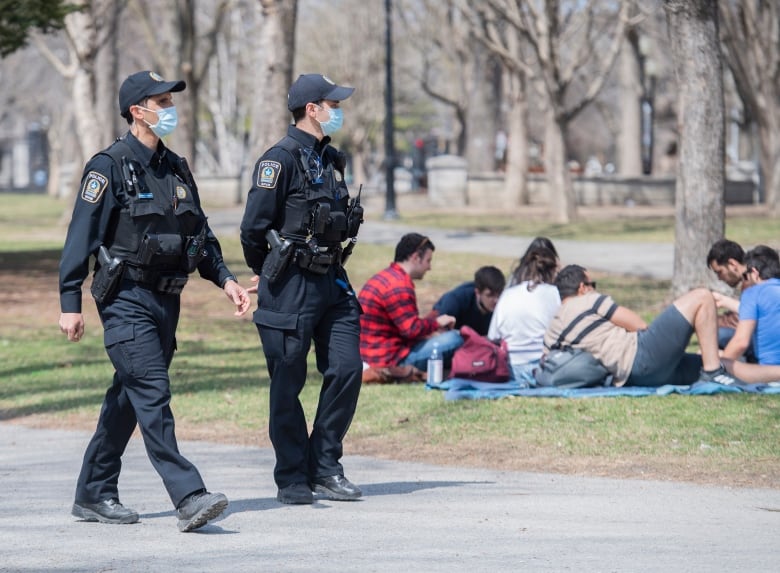 A study that analyzed 31,845 tickets issued for public health violations by Quebec police during the first 15 months of the pandemic found there was a higher concentration of fines in some of Montreal’s more diverse neighbourhoods.

The total number of fines tops $50 million provincewide and nearly 50 per cent of the citations — 15,076 — are being contested in court, according to the report published Monday by the Observatoire des profilages, a Université de Montréal group focused on profiling.

“In Montreal, we’re up to 11,000 tickets until June 2021, so we can see it is a political choice to choose to punish and it’s a choice that has heavy consequences on individuals and on the judicial systems,” said Jacinthe Poisson, a researcher with the Observatoire.

COVID-19 measures were enforced punitively in Montreal, she said.

“The police and judicial over-commitment, which stems from a political choice in the province, is all the more worrisome when we see that the people who have gone to court are often those who live in underprivileged neighbourhoods, with a large multi-ethnic composition or in certain Indigenous communities located usually close to urban areas,” the report said.

The report said 377 tickets were issued to people who reside in Indigenous communities.

On average, there were 326.5 tickets per 100,000 residents in Quebec, but that number jumps to about 513 in Montreal and 479 in Abitibi-Témiscamingue.

The number skyrockets in more specific areas like Outremont which had 1,173 tickets served per 100,000 inhabitants with a large portion of those issued for gathering in houses of worship, the report said.

Other Montreal neighbourhoods with rates per 100,000 include:

While thousands of tickets are being contested, several measures have been taken jointly with different partners to avoid the termination of proceedings due to delays, said a spokesperson for the Crown prosecutor’s office, the Directeur des poursuites criminelles et pénales.

“We still monitor this situation closely and make efforts to implement required measures to manage efficiently the number of cases in penal matters, which include the tickets issued in compliance with the Public Health Act,” said Patricia Johnson.

The Ligue des Droits et Libertés (LDL) is calling for an independent body to examine the management of the health emergency.

The organization’s president, Alexandre Pierre, said researchers could only work with the data available, which includes the type of infraction and place of residence.

That geographical data can be compared to previous studies on the ethnic, economic and racial makeup of each area, she said.

“If we put together the data before and [the new] data, we could come to the conclusion that there’s racial profiling involved,” Pierre said. “A lot of tickets were served in very specific areas.”

She said there is no data proving curfews and other punitive public health measures are an effective tool in fighting back against a pandemic, but this level of enforcement created a substantial financial burden for many people.

“The punitive approach of Quebec was not the right one,” Pierre said. “It was not cost-effective or science-based.”

The report calls particular attention to the 275 tickets issued to people who gave a homeless shelter as their home address. Poisson said 99 of those tickets were for curfew violations even though people experiencing homelessness were supposed to be exempt.

A spokesperson for the Ministry of Public Security, Louise Quintin, said the ministry twice sent out information to police services regarding interventions with vulnerable people.

“Police applied the rules enacted under the Public Health Act with diligence and discernment and knew how to show a certain tolerance when they believe that the situation requires it,” Quintin said.

“Although homeless people were excluded from the curfew measure, they were not exempt from compliance with all the other health measures aimed at protecting the entire population during the health crisis.”

David Chapman, executive director of the homeless organization Resilience Montreal, said people would come by the centre very stressed about their $1,500 ticket.

He agrees with the report when it says there were likely more than 275 tickets issued to those experiencing homelessness in Montreal as people may give a friend’s or relative’s home address. He said heard of people getting tickets when they were staying at friend’s place rather than a shelter.

He said there could be cases where people did not explain their housing situation clearly to officers. On the other hand, he said, it could be police weren’t checking living statuses well enough.

“Clearly something went wrong in the application here. The question is, what exactly?” Chapman said. “It’s really hard to imagine what it is.”

In a statement a spokesperson for the Montreal police service says officers were always instructed to exercise judgment, discernment, compassion and tolerance.

During the curfew, officers worked in “support mode” on a case-by-case basis while collaborating with local partners and referring people to community resource, the statement says.

“Moreover, in certain circumstances, officers have themselves transported homeless people to emergency shelters,” the statement says.

People experiencing homelessness were not targeted, but tickets were issued if someone was being violent, flagrantly disregarding health measures or unco-operative, the statement says.