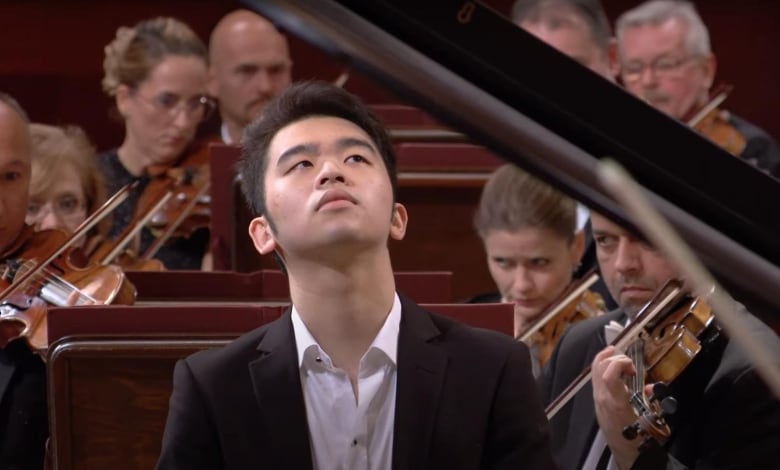 Bruce (Xiaoyu) Liu’s piano playing has been described as elegant and jaw-dropping. Now the 24-year-old Montrealer’s skill has earned him first prize in one of the most prestigious and oldest piano competitions in the world.

His teacher, Đặng Thái Sơn, loved seeing the crowd’s response Thursday in Warsaw, Poland, where he was also serving as a juror during the 18th International Fryderyk Chopin Piano Competition.

“You can see their reaction in the hall … a standing ovation,” he said.

Liu is a graduate of the Montreal Conservatory of Music, where he studied under Richard Raymond.

Raymond said seeing a student win at that level of competition is a dream come true. “Because you work in the background a lot, but we are there, all the way through their development and their growth,” he said.

From competitor to teacher

Liu had been getting ready for the competition with Sơn’s help, and there are few people as qualified.

Sơn, who lives in Montreal, won first prize at the Chopin Competition in 1980. That was the first time that a top international competition was won by an Asian pianist.

The fact that Liu followed in his footsteps is “a historic moment,” Sơn said, because it’s the first time a student of a former winner has taken first prize.

JJ Jun Li Bui, of Toronto, was awarded sixth prize. The 17-year-old is also one of Sơn’s students.

Sơn moved to Canada from Vietnam in 1991 and has taught around the world.

Nearly a century of competition

The International Fryderyk Chopin Piano Competition started in 1927 and has been held every five years since 1955. This year, Sơn said there were more than 500 applicants vying for the win.

He said the competition was put on hold last year due to the pandemic, and that extra year of practice led to some stellar performances.

Throughout the pandemic, Sơn has been staying home, working remotely with most students. His only exception was Liu, whom he met in person for lessons.

Liu, who was born in Paris to Chinese parents and lived in Montreal, has a multicultural background that shows in his playing, said Sơn.

“He has a lot of charisma in his playing, with some kind of intensity that he keeps the audience breathless,” he said.

“HIs life is changing now. He has become a big star,” said Sơn.

After winning the competition, Liu told The Associated Press that he sees the victory as a “huge responsibility to continue this shape that I have and to be able to constantly keep finding freshness despite all this noisy world.”

The pandemic helped him peacefully concentrate on music and refine his playing, he said.

Liu started piano lessons at the age of eight, but had other hobbies and practised little. Then he won prizes from junior competitions and began taking it more seriously. Regardless, he said, he devotes a lot of time to other passions.

Now, after an intense competition, he said is looking forward to a break. “I am happy to be able to sleep and party!”

2nd place finish for Montrealer in 2015

Montrealer Charles Richard-Hamelin knows that feeling. He placed second in the competition in 2015.

“As much as it’s taxing, it’s such a boost of energy going through that experience,” he said.

Along with two years at Yale, Richard-Hamelin studied at McGill University and the Montreal Conservatory. Now he is teaching at the Université de Montréal, where Liu also studied.

He said Liu’s win is important for Montreal, demonstrating how in tune the city is with music education.

“I think it’s a great signal for the rest of the world to know that there’s something happening now in Montreal,” said Richard-Hamelin.

“The biggest competitions are starting to be won by people from here and hopefully that will attract major young talents to study in Montreal.”

24-year-old Bruce Xiaoyu Liu of Montreal was named the winner of the 18th International Fryderyk Chopin Piano Competition, considered one of the most prestigious in the world. 2:05