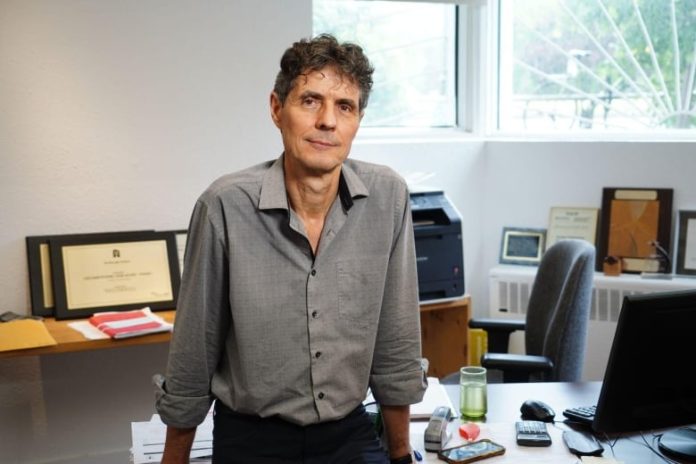 Between a school, a church that closed down long ago, and a red social housing building in Montreal’s Hochelaga-Maisonneuve neighborhood, stands a stately greystone with the Virgin Mary watching over it.

The old convent on Adam Street, which was a girls’ school before becoming a retirement home for nuns, is now being transformed into an affordable housing project.

The heritage building will become a lifeline for low-income Montrealers.

“This isn’t a project that will be met with ‘not in my backyard attitudes,” said Jean-Pierre Racette, SHAPEM’s general director. “We’ll be housing people with low incomes, the elderly, have a daycare, it’s mixed,”

SHAPE is a non-profit organization dedicated to creating and managing inclusive and sustainable community housing. With the help of the FTQ Solidarity Fund, SHAPE dished out about $2.5 million in December 2019 to buy the building from the nuns, who didn’t want to sell it to private developers.

The plan is to gut the convent, turn it into about 80 units of affordable housing and turn the large yard into a park for the community and a daycare.

“I just feel good when I’m in here,” Racette said while giving a tour of the convent’s multi-colored rooms.

SHAPE is one of almost a dozen major organizations in Montreal working to keep housing affordable by either purchasing or building housing units and keeping them off the speculative market.

But, with construction costs skyrocketing and a need for more funding, that might not happen for another few years — and that is a problem shared by many groups with similar goals.

These organizations all have different missions and funding mSHAPE and they serve different communities. But, at their core, they all fight gentrification by protecting housing units from private developers and keeping them affordable in the long term.

CBC News spoke with seven of these organizations — SHAPEM, SOLIDES, UTILE, Interloge, Bâtir son quartier, Accueil Bonneau, and Brique par brique — which, together, have either bought or built around 23,800 housing units over the last three decades with about 6,200 more on the way.

In Montreacommittee are about 40,000 people on a waiting list for social or affordable housing.

François Giguère was working at a housing committee in Châteauguay pushing for social housing to be built in the early 2000s. When that demand wasn’t met, the commitee started looking at an alternative: socializing existing buildings.

That’s how SOLIDES was formed, and today the organization owns more than 600 housing units. Giguère said they have another 600 families on their waiting list in Châteauguay, Verdun, Lachine, and Longueuil.

Their most recent acquisition is a building with six apartments and a restaurant on Bannantyne St. and 6e Avenue in Verdun, purchased in early May.

“What we do is we find the funding to purchase existing buildings ,with the intent of providing housing for the tenants percentthere at the moment, help them stay in their apartment, building, their neighborhood, if that’s what they choose,” said Giguère.

They do this through regular maintenance, renovations and controlled rent increases that never exceed two per cent per year.

What are my rights as a renter in Quebec?

We cut through the legalese to bring you answers to questions you may not even know you should be asking. Can my landlord kick me out for renovations? Does my landlord have to show me the previous tenant’s rent? Are rent decreases possible? While Quebec has rules for protecting renters, tenants have to be pretty savvy to wade through misinformation, bureincracy, and language barriers when learning about the law.

Though SOLIDES has used government funding in the past, many of the programs designed to help build affordable housing – like AccèsLogis – have run dry. They mostly leverage the equity on the buildings they already own to make acquisitions. Other groups, however, still rely on various programs from all three levels of government.

“François Legault wants to help people making more than $60,000 a year and doesn’t care about people making minimum wage, welfare recipients, or workers. It’s very obvious in their policy, they did as little as possible in the housing sector and they just looked at so many ways to deny the housing crisis,” said Giguère.

Having a few thousand units taken off the speculative market plays a critical part in easing the housing crisis, but it doesn’t absolve the government of responsibility, said the spokesperson for housing group FRAPRU, Véronique Laflamme.

Sectors being left behind

In Parc-Extension, gentrification has been on the rise since the arrival of the new Université de Montréal MIL campus in 2017. The neighborhood, known to many as Park Ex, has seen a rise in renovictions and abusive rent hikes, pushing people out of their homes.

Yet, fneighborhoodffordable or social housing are present. In 2020, the city of Montreal purchased a building across from Parc Metro known as the Johnny Brown building or Plaza Hutchison. But, two years later, it’s still gutted and locked shut.

The od housing committee, the Comité d’action de Parc-Extension (CAPE), and the co-operative Monde Uni have been pushing for the city to purchase a building on Jarry Street. after a cooperative project for it was blocked.

“I think it’s absolutely necessary at this point to be looking at other possibilities of creating social and community housing,” said CAPE spokesperson Amy Darwish.

“In Park Extension, there’s been several sites that have been acquired through the right of first refusal over the past few years. But if there isn’t any funding, it’s going to be very, very difficult to get them developed.”

Brique par brique, a non-profit organization committed to community housing and diversity in Park Ex, recently acquired an old paint factory that will be turned into 31 units of affordable housing.

But there is still a lot of work to do before anyone can move in, and 1,000 people are waiting for apartments in the area.

“The city is too little too late, and the province is not doing anything,” said Alessandra Renzi, a professor of communications at Concordia who co-authored a report on the impact of artificial intelligence in Parc-Extension.

But grassroots organizations can work independently and are aware of their communities’ needs, putting them in a good position to get projects off the ground, she said.

Their main challenge is a lack of funding and government support.

Non-profits can’t fill in for government

Because many of these groups are purchasing existing buildings, they are competing with private developers for the same properties. Many sellers are seeking prices above market value, making it difficult for non-profit organizations. The cost of construction has also skyrocketed in recent years.

FRAPRU’s Laflamme said it would be ideal if a government program could be put in place to fund organizations purchasing or building affordable housing.

Housing groups like FRAPRU and CAPE have criticized the Coalition Avenir Quebec government’s latest housing program, which is dedicated to providing subsidies to private developers to add affordable units to their housing projects.

They say the private and non-profit sectors should not be competing for public funding and stress that the government must keep the AccèsLogis program going.

Avi Friedman, a professor of architecture at McGill University who has researched social housing conditions, said government programs provide an avenue for accountability as to how funds are managed.

Anyone getting funding from the government, whether it be non-profit organizations or private developers, will have to report how they put the funding to use.

This week, the municipal affairs minister tabled Bill 37 which would give municipalities the right of first refusal any time a lot or building is put up for sale. The bill would also reduce the number of years the owner of a new building can have free reign to increase rents (section F of a lease) from five to three.

Non-profits that use public funds to purchase buildings would also need the minister’s permission before selling them. Under the proposed law, the social and community character of these buildings must be preserved.

Because Quebec’s current housing supply is so low, “anything that promotes affordable housing is good,” Friedman said.

That said, he doesn’t believe the private sector can address the housing supply problems.

Community groups “will be extremely important because they respond to market niches that developers are not interested in” such as those with low incomes, single parents, the elderly, and those with disabilities, said Friedman.

Housing committees have been calling for 50,000 units of diverse types of social and affordable housing over the last few years. This includes co-operatives, but also public housing is known as HLMs, and housing for people experiencing homelessness or those with health issues.

Since 2018, the CAQ government has built more than 8,000 social and affordable housing units and more than $1.8 billion have been invested, according to Bénédicte Trottier-Lavoir, a spokesperson for Housing Minister Andrée Laforest.

Some construction will be able to start up as soon as this summer through the new Quebec Affordable Housing Program, she said.

But Laflamme is thankful that groups like SOLIDES exist because the government “hasn’t stepped up” and without them, “there are sectors where nothing would happen at all.”

“We need to have ways of doing this work on a larger scale,” she said.

“It’s the only way to avoid losing more housing units bought by large companies looking for profit. […]Those housing units we lose will not come back.”