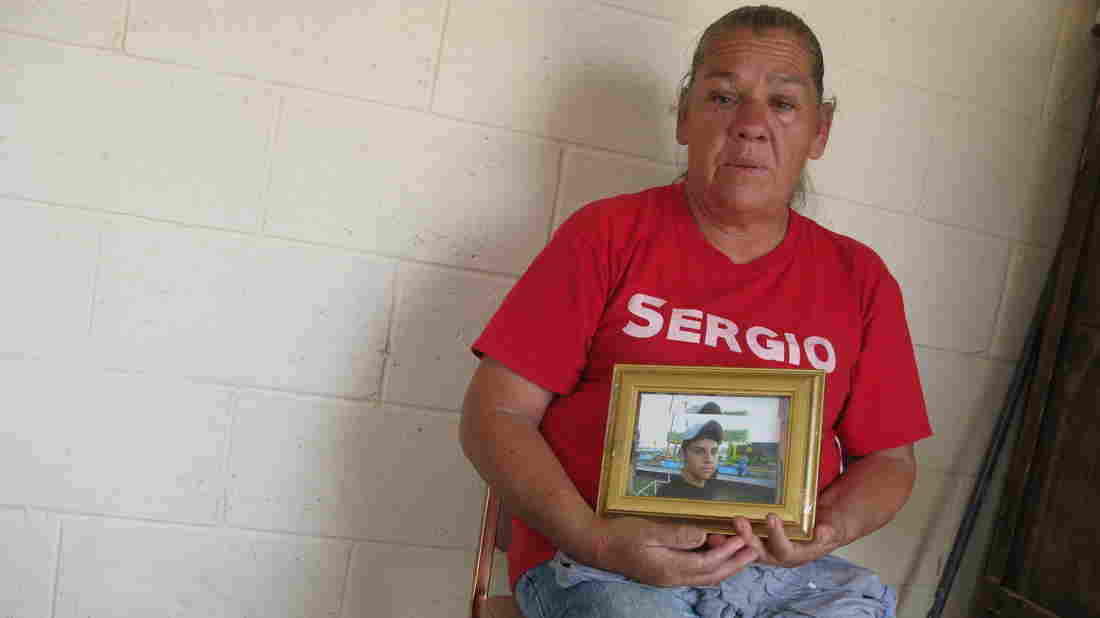 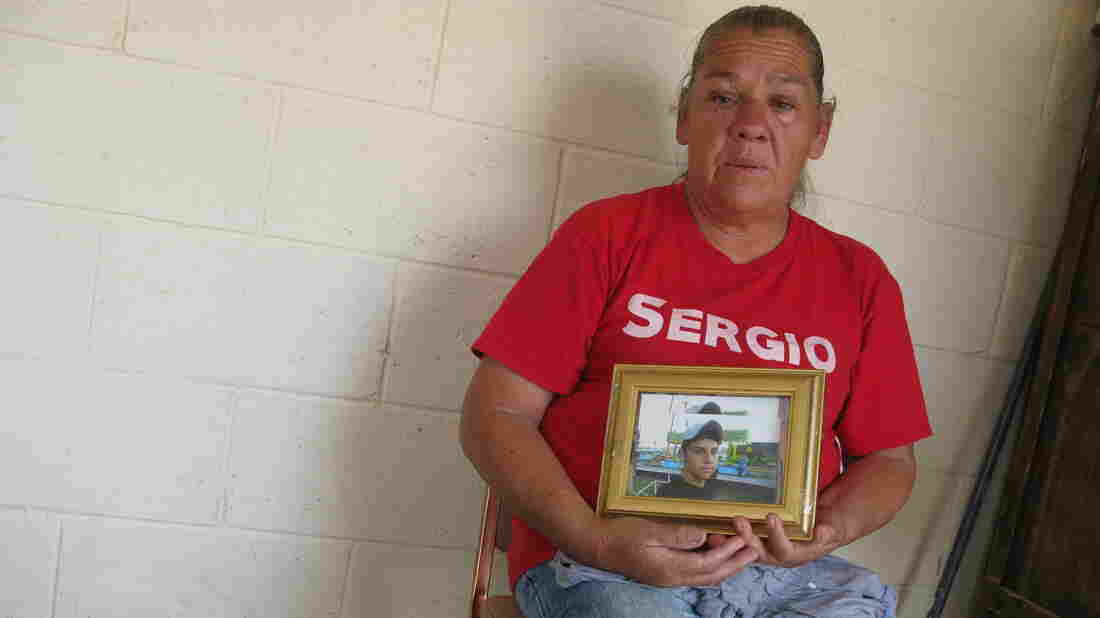 Maria Guereca in her apartment in Juarez, Mexico, holding a picture of her son, Sergio Hernandez the day the Supreme Court news came down. He was killed by a Border Patrol agent seven years ago this month. John Burnett/NPR hide caption

Maria Guereca in her apartment in Juarez, Mexico, holding a picture of her son, Sergio Hernandez the day the Supreme Court news came down. He was killed by a Border Patrol agent seven years ago this month.

Two-thousand miles away from the Supreme Court’s vaulted ceiling and marble friezes, 60-year-old jobless mother Maria Guereca sat in her $20-a-month, one-room apartment with a fan and a hotplate — beside a picture of her dead son.

On Monday, the Court gave Guereca, who lives in Juarez, Mexico, a partial victory, saying a lower court erred in granting immunity to an agent who shot and killed her son.

As the Trump administration plans to ramp up security on the border, the case is being closely watched, as it examines whether U.S. agents should get immunity when shooting into Mexico.

The case stirs strong reactions down on the border.

I want justice. This officer cannot be allowed to continue, because there’ll be another young victim, then another and another.

Fifteen-year-old Sergio Hernandez was slain by a Border Patrol agent seven years ago. The lawman was standing on one side of a culvert in El Paso, Texas; the unarmed teenager was on the Juarez, Mexico, side. Federal courts are deciding whether the young man has rights under the U.S. Constitution, and if his mother can sue the agent for damages.

Monday morning, she received a call from her attorney in Texas.

“He told me there was some good news, but we’re still waiting for victory,” she said in Spanish.

“I want justice. This officer cannot be allowed to continue, because there’ll be another young victim, then another and another.”

The High Court called the shooting “a disturbing incident resulting from a heartbreaking loss of life.” But it resisted overturning the ruling and instead told the Fifth Circuit Court of Appeals in New Orleans to reconsider its decision giving Agent Jesus Mesa Jr. “qualified immunity” from civil liability.

He claims he shot Hernandez in the head because the boy had been throwing rocks at him and the agent feared for his life. The FBI investigated the case, and sided with Mesa. 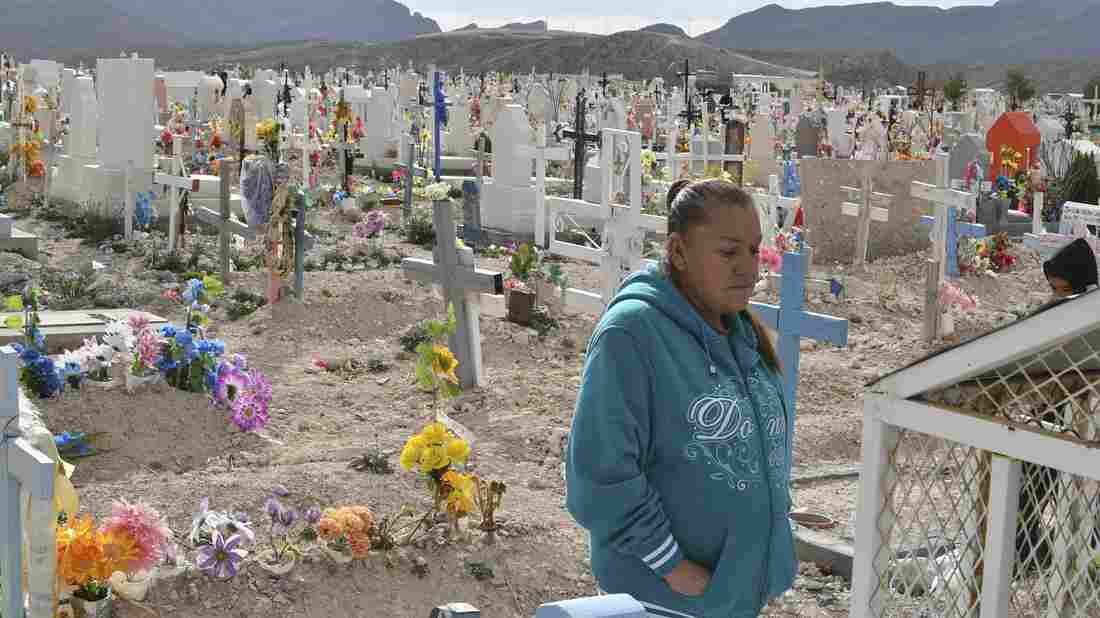 Maria Guereca visiting the grave of her murdered son Sergio Hernandez in February.

Hernandez v. Mesa is not the only cross-border shooting case. Three other Mexican plaintiffs are waiting and watching to see if they, too, can purse lawsuits against Border Patrol officers who killed family members — across the international boundary line.

Maria Guereca says she’s in touch with them.

“They’re all the same — they’re over rocks,” she said. “They were killed because the border agents said they were throwing rocks.”

In each case, the Border Patrol says the agents came under attack from projectiles and were acting according to their training. In recent years, in response to these controversial shootings, the agency now urges its agents to take cover or get out of range of rocks.

But Stuart Harris, vice president of the Border Patrol union in El Paso, points out agents can still use deadly force.

“When there’s a situation where your life is threatened by another human being, does nationality matter? It shouldn’t.”

But the victim’s nationality is the reason this case reached the Supreme Court. If the teenager had been shot on U.S. soil, he would have constitutional rights and the officer would be liable. But because the victim was standing outside of U.S. territory, a lawsuit has — until now — been impossible.

Monday’s decision may be the first step toward removing that legal shield.

It’s a terrible precedent. If there’s no qualified immunity there, what are we doing?

“It’s a terrible precedent,” Harris said. “If there’s no qualified immunity there, what are we doing? The job is already dangerous enough, and decisions like this if ultimately it goes against us it’s going to make things even worse.”

The Supreme Court now sends the case back to the conservative-leaning Fifth Circuit to decide whether or not Maria Guereca can move ahead with her lawsuit against the agent. The court instructs the lower court to consider the case in light of a recent decision, Ziglar v. Abbasi, which holds that damages against federal officials can only be considered in light of a specific remedy authorized by Congress.

Bob Hilliard, who represents Sergio Hernandez’s family, says he hopes the court will “determine that constitutional protections apply along the border to anyone who finds himself at the border with a law enforcement officer in the U.S.”

The Supreme Court’s decision split 5-2-1. Justice Clarence Thomas dissented, saying liability of federal agents does not extend to “cross-border conduct;” Justice Stephen Breyer wrote a dissenting opinion with Ruth Bader Ginsburg joining. They said Hernandez deserves Fourth Amendment protection because the United States is responsible for what happens on the concrete riverbed that divides the two nations. Justice Neil Gorsuch took no part in the case because he was not on the court when arguments were held.