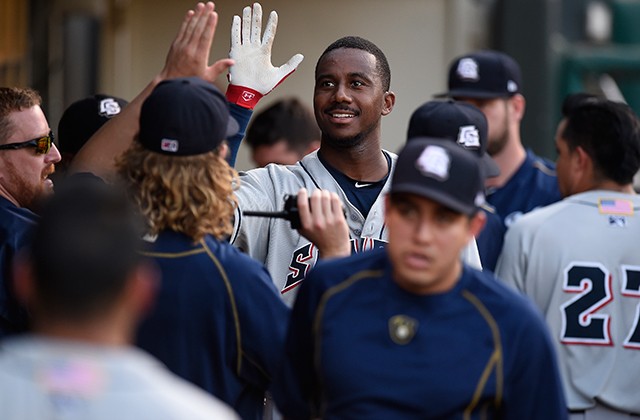 The Oakland A’s selected Greg Deichmann with the No. 43 overall pick in the 2017 MLB Draft. The 22-year-old is an outfielder from Louisiana State University.

With this pick, the A’s have potentially taken outfielders with their top three selections, depending on where Kevin Merrell ends up playing. Unlike Beck and Merrell, though, Deichmann is destined for a corner spot rather than holding hope of playing CF. He was ranked as high as No. 63 by MLB Pipeline, so like with Merrell the A’s reached down a bit for the guy they liked.

Here’s a scouting report on Deichmann from MLB Pipeline:

Deichmann led Louisiana prepsters in homers for three straight years and offered some of the best power among high school middle infielders in the 2014 Draft, but a so-so senior season and signability issues left him unselected and headed to Louisiana State. He barely played as a freshman before swatting 11 homers as a first baseman in 2016, after which the Twins drafted him in the 26th round. He’ll go much higher this June after shaking off facial fractures in a preseason scrimmage to set a new career high in homers midway through the season.

Since his high school days, Deichmann has impressed with his bat speed and strength. He’s now tapping into his pop better than ever after shortening his left-handed swing and employing a more selective approach. He’s also using the whole field more, making more consistent contact and drawing more walks.

Though he was a shortstop in high school, Deichmann’s below-average speed and quickness limited his defensive options at higher levels. He’s finding a home in right field, where he could become close to an average defender with more experience. His solid arm strength is suited for the position.

Here’s a quick rundown from Wayne Cavaldi of Minor League Ball, who praises Deichmann’s power. Here he is hitting a 486-foot home run: