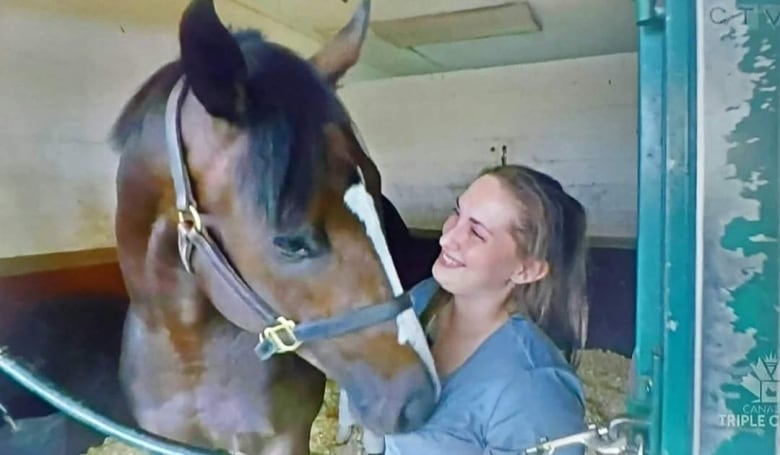 Mighty Heart, the one-eyed colt with a Nova Scotia connection, has captured the title of Horse of the Year in Canada.

Canadian Horse of the Year is a thoroughbred horse racing honour presented annually for 70 years.

“It still hasn’t really hit me yet that I’m grooming the Canadian Horse of the Year,” Cape Breton’s Siobhan Brown, Mighty Heart’s groom, said from Toronto on Saturday.

Mighty Heart was awarded the title at The Jockey Club of Canada’s 46th annual Sovereign Awards ceremony on Thursday.

Brown has been grooming Mighty Heart since early last year. She said she didn’t expect Mighty Heart to come this far this quickly.

“I kind of laugh because back in March of 2020, I wanted [to be his groom] because I thought he was a fun little guy and I liked his personality,” she said. “And it’s just evolved into this crazy ride.”

Mighty Heart, nicknamed Willie, lost his left eye in a paddock accident when he was just two weeks old — but he’s never let that stop him.

Brown said his ability to overcome physical challenges, like being fitted for a cup that goes over his eye socket and having his wolf teeth removed, has pushed him to thrive — among other things.

“And I truly believe that a happy horse will always give everything they can for you.”

He won the Queen’s Plate, the opening leg of the Triple Crown with a winning time of 2:01.98, the second-fastest since 1957. He also went on to capture the second jewel, the Prince of Wales Stakes.

In October, he fell just short of the Triple Crown, finishing seventh at the Breeders’ Stakes. He would have been the first horse since Wando in 2003 to capture the Triple Crown — and the first to do it with one eye.

Despite that loss, Brown said Mighty Heart continues to love what he does.

“He loves going to the track every day. His ears are up. He’s happy. He’s spunky. He loves his job.”