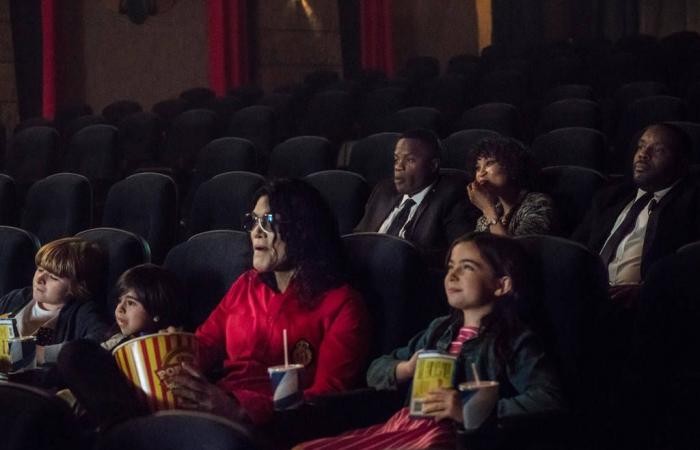 Did you know Michael Jackson brought his own hot sauce and spray butter to the movie theater?

That’s just one of the surprising things viewers may have learned about the late King of Pop in Lifetime’s Michael Jackson: Searching for Neverland, the new unauthorized biopic that details the last years of his life, told from the point of view of his security guards, Bill Whitfield and Javon Beard.

Based on their 2014 book, Searching for Neverland revealed some intimate details about Jackson, who is played by Navi, a world-famous impersonator, in his acting debut, and shined a light on his relationship with his three children.

Here are the most surprising revelations from the two-hour movie that aired on Monday night:

1. When Jackson put masks on his children’s faces to avoid having their identities known to the public, he called it “dress up” and turned it into a game and were told not to use their real names.

2. A photographer once got a photo of Blanket, with Javon tracking him down and taking the camera. Jackson then allegedly paid $75,000 to the photog after his then-assistant Feldman destroyed it. (Feldman was then fired, according to Bill.)

3. According to the film, Jackson first met Dr. Conrad Murray when daughter Paris fell ill and needed medical attention. Not wanting to bring her to the hospital for fear of the paparazzi seeing them, Jackson requested a private physician. After his death, Murray was charged with involuntary manslaughter, convicted, and sentenced to four years in jail following Michael’s death in 2009. He served two years before being released.

4. In the biopic, the only Jackson sibling shown is Randy, Michael’s younger brother and a member of the Jackson 5, who is seen in one scene driving through a gate, demanding money he felt his brother owed him. Though Michael’s father Joe Jackson was told he needed an appointment to come see his son in an earlier scene, he’s called in to deal with Randy. This all happened on the night of Elizabeth Taylor‘s birthday party, which Jackson ended up not attending, nervous Randy would follow him there.

5. While Jackson personally didn’t celebrate Christmas as a Jehovah’s witness, he still allowed his three children to open presents and celebrate.

6. Per Bill, Jackson brought his own hot sauce and spray butter into the movies for his popcorn. His favorite actor? Charlie Chaplin, bringing his children to a festival dedicated to the “king of comedy.”

7. In case of emergencies, Jackson carried around the Oscar statue for Gone With the Wind and a briefcase of $200,000 and passports.

8. Deeply private, in one scene, Jackson cut open his hand pulling a surveillance camera from a wall in a hotel in Washington, D.C.

9. One of his favorite songs, according to the movie? Bobby Brown‘s “My Prerogative.”

10. Though he craved a normal life as a dad, according to Bill, he also loved his fans, and often had his fan mail delivered to him. He also would tell the police it was OK for his fans to wait outside his house.

11. Jackson was in serious debt, and Bill and Javon didn’t get paid for five months, but felt protective of their client and his children, becoming attached to them. Bill even missed Christmas with his daughter to be with the family. Unable to tell anyone who they worked for, Bill and Javon’s personal relationships were impacted by their job.

12. In order to pay off his debts and buy a new house, Jackson was told he needed to do a Las Vegas residency, but he allegedly told Bill it would “kill” him, as he couldn’t perform five nights a week at the level he used to.

13. In another scene, Jackson is a on date, with Bill driving the couple around. His date convinces him to go out to a bar like a “normal couple,” but he soon changes his mind when a man accosts him on the street.

What did you think of Lifetime’s Michael Jackson: Searching for Neverland? Sound off in the comments.