Meet the Gander, N.L., chef whose cafeteria menu has high school students lined up and salivating 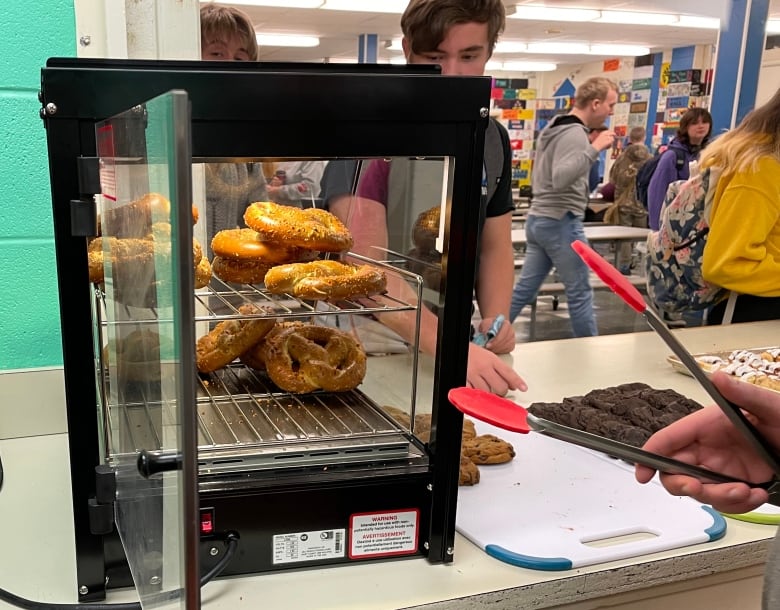 When the recess bell rings at Gander Collegiate, chef Josh Boyde knows the rush is about to begin. Dozens of teenagers line up for their snacks in anticipation of what the chef is cooking, the aroma of warm cinnamon and cooked dinner having wafted throughout the school all morning.

“I’ve been eating here every day, it’s so good,” said Gavin Burry, a senior at the high school. “The sweet potato fries? I went feral. It was insane.”

The Chef Josh brand is well known around Gander, as Boyde does private catering, has a meal-kit pickup service and runs the restaurant at the local golf course.

Boyde said parents had been asking him to run the school’s cafeteria, which didn’t reopen following its pandemic closure.

While Boyde accepted, he soon found that running a school food service isn’t like owning a restaurant. Strict nutritional guidelines need to be met.

“That took several weeks of planning,” Boyde said. “I had to go back and forth with the dietitian with Central Health who’s affiliated with the school board. Back and forth and we came to terms on a menu.”

Since the menu’s approval and the cafeteria’s reopening in late October, Boyde said, the service has been a big hit.

“We’ve had great reception from the students so far. We’re doing well over 100 students a day through the canteen service and about 120 for lunch.”

The canteen’s only problem? The lineup is too long to be served during the 20-minute recess period, with students still backed up to the cafeteria door long after the third period bell rings.

“That’s something that, as a new company within the school, they’ll have to give some consideration to,” said Drover.

“They’ve got some of the new bagels there and cookies and whatnot, and of course the smell is going right through the building which is great. But it’s kind of tough in that regard. You should have been here last Friday when they had turkey dinner. It was quite the challenge to stay focused.”

Boyde said the turkey dinner was a surprisingly big hit.

Other popular items on Boyde’s rotating menu include pulled pork sandwiches, mac and cheese, and chicken and waffles.

“Our stuffed pretzels are one of our biggest sellers. And then next to that would be our cinnamon buns.”

One factor that Boyde tries to keep the same among all the dishes is affordability.

“We gauged it between the pricing of five dollars to 10 dollars,” he said. “We try to keep all of our items in that price range. Most of our recess items are less than five.”

“It’s really good and it’s really cheap for a good meal. I like the mac and cheese, but I can’t wait for the lasagna.”

“We haven’t had this in a long time, so it’s very exciting,” said fellow student Burry. “We didn’t even have a cafeteria before, so everyone’s going crazy over this. This is, like, bougie to us.”