Meet one of the youngest cannabis executives in Canada 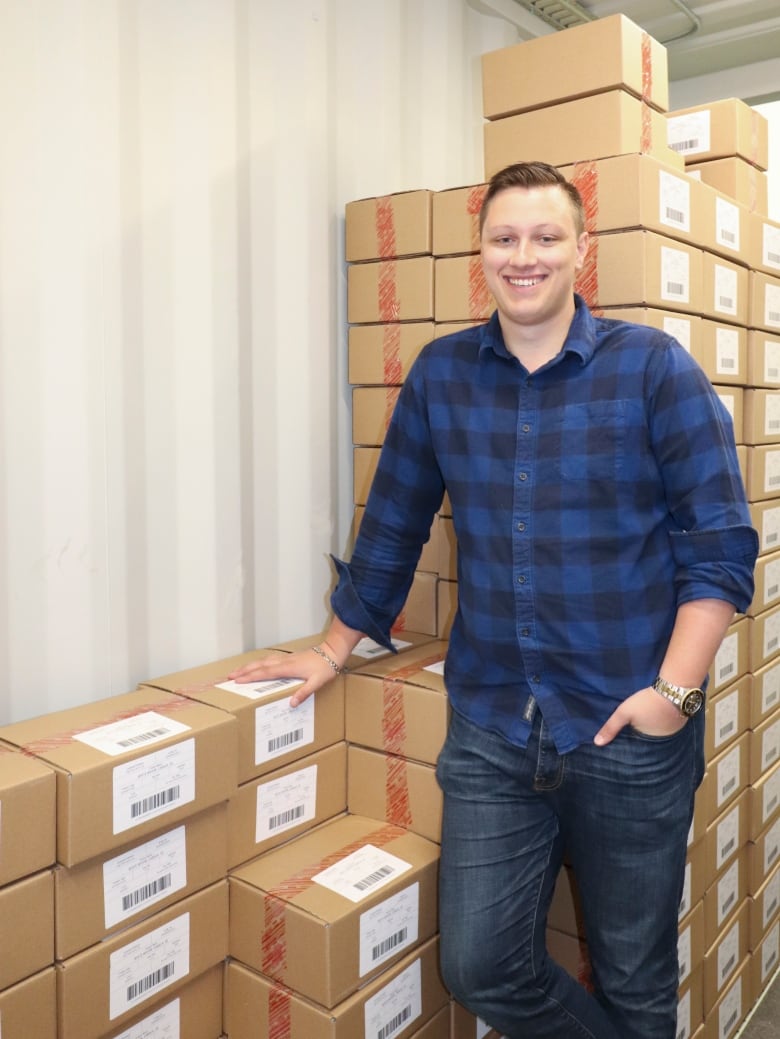 Dawson MacKinnon was on his way to becoming a financial broker a year ago when he had to break it to his mother that he was quitting his job to enter the cannabis industry.

The now-23 year old was consulting at an investment banking firm in Calgary. As more and more of his clients were asking to invest in cannabis companies, he began researching the soon-to-be legal market in Canada.

Cannabis was not something he was familiar with on a personal level. He said that, having played competitive volleyball growing up and going straight into the business world, he hadn’t even used pot himself. The same goes for his business partner, 24-year-old Jesiah Wedel.

Despite their lack of experience at the time, both moved to Saskatchewan to join the newly-emerging industry.

Together, they now operate Running Leaf, the first wholesale cannabis company in Canada.

MacKinnon is the president of the company and one of the youngest owners in the Canadian cannabis industry.

“Saskatchewan gave a great opportunity to two guys who, honestly, in 99 per cent of the other provinces, would have never gotten it,” he said.

The pair first pursued an opportunity with Health Canada to distribute pot to the entire country, but that was thwarted when the provinces were granted the ability to regulate their own distribution. Health Canada reimbursed their national licensing fee and helped them connect with the Saskatchewan Liquor and Gaming Authority (SLGA), which governs cannabis in one of the only provinces to allow private wholesalers.

There was a strong learning curve for MacKinnon and people in his life had mixed reactions.

MacKinnon said his father was on board from the beginning, but his mother was wary.

“My mother, up until Christmas, told all my family I was in Saskatchewan selling water treatment chemicals because she didn’t know how to honestly explain what it is we do. I don’t blame her because up until it was actually happening, I didn’t even know how to explain it,” MacKinnon said.

“It’s still weird that everyday we get up and I come to a building that is full of cannabis and I deliver it and it’s totally legal. That just sounds insane when we say it out loud.” 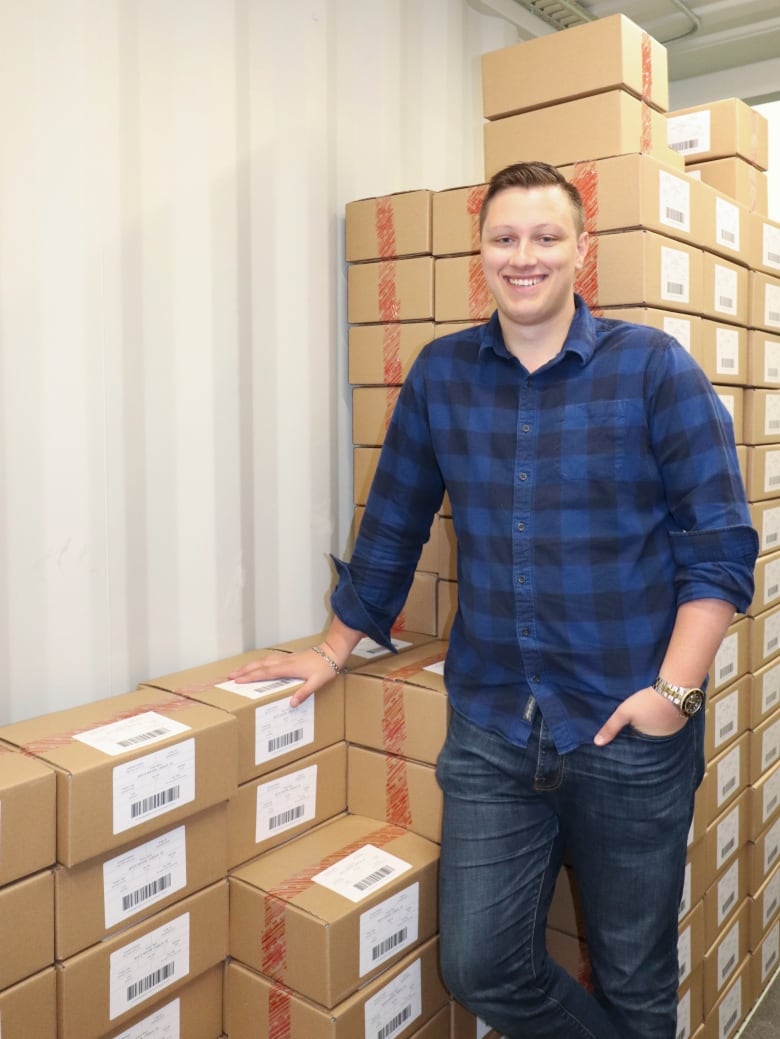 MacKinnon stands in front of a stack of boxes containing legal cannabis in his unmarked warehouse in Saskatoon. (Submitted by Running Leaf)

MacKinnon said he was turned away from his bank of 20 years when he sought out a loan. He said when they found out he was entering the cannabis industry, he was told to withdraw his money and close his accounts.

He and Wedel pooled what savings they had and eventually found an investor who agreed to loan them $250,000.

The SLGA issued them the first of four wholesale cannabis permits on Oct. 17, 2018.

They have an unmarked warehouse in Saskatoon. It’s secure and temperature controlled. All their product is kept in vaults. They also purchased two unmarked vehicles and had them outfitted with armour.

In the past six months, they went from one other employee to a payroll of 11 people.

On average, 100 to 200 kilograms of product are delivered to their facility every month. They purchase it directly from six different licensed producers in B.C., Alberta, Ontario and New Brunswick, and sell it to all the cannabis retailers operating in the province. 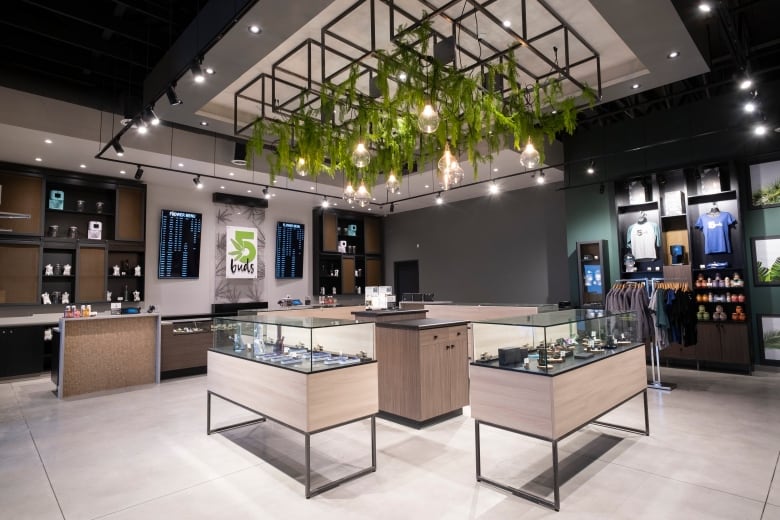 5 Buds Cannabis is one of the legal cannabis stores that purchases product from Running Leaf. (Submitted by 5Buds Cannabis)

Because they purchase so much product, MacKinnon said they have leverage to push back on prices. 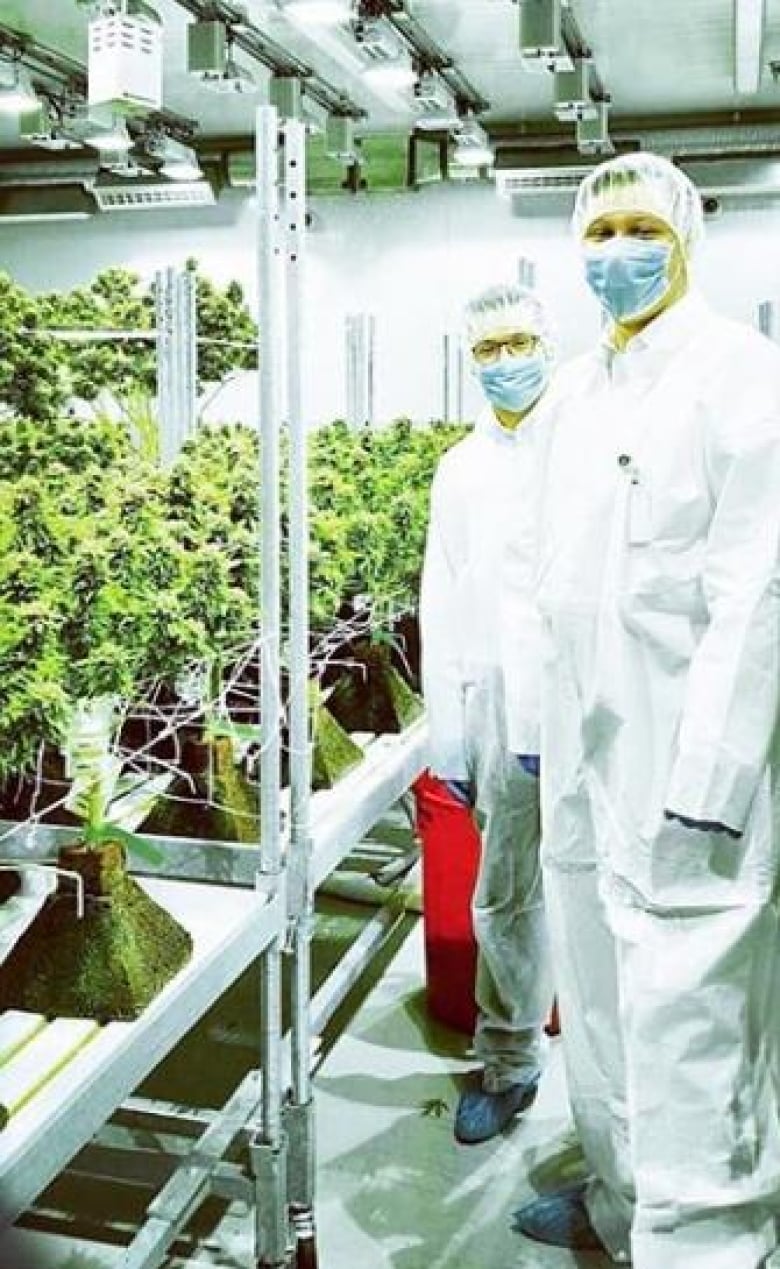 “At the age of 21, I went to a funeral for someone I went to high school with due to there being something that wasn’t cannabis in their cannabis,” he said. “Everything that we get comes with a piece of paper certified by an approved lab by Health Canada saying that they’ve tested all the batches.”

MacKinnon said he hopes Running Leaf will continue growing as they forge partnerships with more retailers.

“Some of our stores are requesting certain drivers just due to relationships they have with them,” said MacKinnon. “Our stores all have my cellphone number. They have that immediate connection instead of going through a company in another province and trying to go through corporate to get a problem resolved.”

MacKinnon said he sees the legal industry changing one day, allowing for the expansion of Running Leaf in other provinces.

“I don’t see there being a real downside in the cannabis industry right now,” said MacKinnon.

“It’s kind of a gold rush for our generation.”