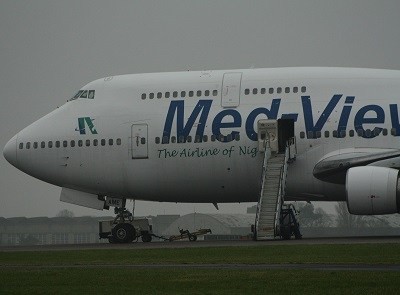 One Emmanuel Ugochukwu, who allegedly stowed away on a Medview Airline Lagos to London and London to Lagos flights, was on Friday remanded in prison custody.

Ogochukwu and his alleged accomplice, Michael Bamiro, a security guard working with ALMN Security at the Murtala Muhammed International Airport, Lagos, were remanded after their arraignment before an Ogba Magistrates’ Court 13 in Ikeja.

DSP Joseph Alabi, who confirmed the development to newsmen in Lagos on Friday, said the accused would remain in custody pending the perfection of their bail conditions.

Pressmen gathered that the accused persons were charged to court by the Police on counts bordering on conspiracy, unlawful entry and attempted suicide.

The Police alleged that they committed the offences between July 1 and July 3 at the departure wing of the Murtala Muhammed International Airport, Lagos.

Ogochukwu was accused of unlawfully entering into the the aircraft without permission, while Bamiro was the security guard on duty at the time of the incident.

Offence of attempted suicide contravened Section 233 of the Criminal Law of Lagos State, 2011 which prescribes a life jail term as penalty for offenders.

Newsmen report that the two accused persons pleaded not guilty to the charge and the matter was adjourned until Nov. 7 for trial.