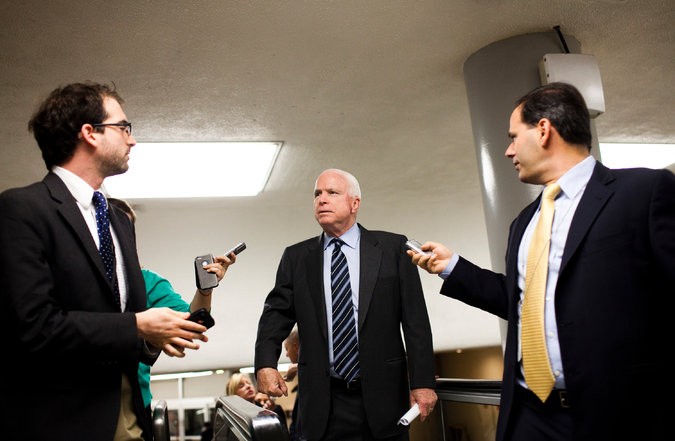 The Senate Republicans’ drive to pass a sweeping rewrite of the nation’s health-care laws took another unexpected turn late Monday when the office of Sen. John McCain (R-Ariz.) announced he would return to Washington for a planned Tuesday vote.

McCain, who was recently diagnosed with an aggressive form of brain cancer, could provide a critical vote to open debate on the GOP bill. The senator had been recuperating from surgery and exploring treatment options in Arizona.

McCain’s announcement came as some Senate GOP leaders expressed confidence in a newly emerging strategy of trying to pass smaller-scale changes to the Affordable Care Act, with an eye toward continue negotiations into the fall.

It was unclear whether McCain’s return would improve the chances of the bill clearing a key procedural hurdle, as he has expressed concerns about the proposal.But some Republicans were privately abuzz with speculation that leaders might be close to securing the votes they needed to at least keep alive a months-long effort that all but died last week.

Still, the prospects of success were murky at best. President Trump threateningly urged Republican senators to get behind the effort Monday, but his sharp rhetoric produced no new public support. And many were confused about what kind of measure their own leadership even intended to bring to a vote. Even if the procedural vote is a success, it by no means guarantees eventual passage of the bill.

Hours earlier at a White House event on Monday afternoon, Trump forcefully encouraged Senate Republicans to vote “yes” on a procedural motion that would allow debate on health-care legislation to begin.

In a West Virginia speech before the National Boy Scout Jamboree later on, Trump sought to pressure Sen. Shelley Moore Capito (R-W.Va.) by saying, “You better get Senator Capito to vote for it,” referring to his health and human services secretary, Tom Price, who was with him. Trump also quipped that he would fire Price if he did not round up enough votes.

“As the Scout law says, a Scout is trustworthy, loyal — we could use some more loyalty, I can tell you that,” Trump said in a day that was filled with thinly veiled barbs at Republicans who have failed to advance the health-care revamp.

McCain is revered on both sides of the aisle. The news that he has brain cancer cast a pall over the Capitol last week, and his return is sure to provide a morale boost for colleagues in both parties.

But most immediately, McCain may provide a critical vote in support of beginning formal debate on the health-care bill. Republican leaders openly discussed the possibility of McCain’s return with reporters on Monday during an evening vote.

Sen. Susan Collins (R-Maine), said she spoke with McCain on Saturday and that her frequent collaborator was eager to get back to work.

“It is just extraordinary how upbeat he is and how accepting of his diagnosis — it was truly inspirational to talk with him,” she said. “I have a feeling that if there’s any way he can be back, he will be here — whether his doctors like it. It just reminds me of what an extraordinarily brave person he is.”

Without McCain, Senate Majority Leader Mitch McConnell (R-Ky.) could only have afforded one GOP defection. Multiple Republican senators have raised objections to each health-care proposal that has been offered, leaving McConnell and Trump in a difficult spot.

“There is still time to do the right thing,” Trump said at the White House on Monday. He added a word of warning: “Any senator who votes against starting debate is telling Americans that you are fine with the Obamacare nightmare.”

[’Obamacare is death:’ Trump urges GOP to move ahead with health-care overhaul]

Vice President Pence is also lobbying heavily for wary senators to pass a health-care overhaul and was spotted heading toward McConnell’s Capitol Hill office late Monday afternoon as votes were getting underway.

McConnell encouraged senators to vote Tuesday to open what he said would be a period of “robust debate” on health care. “I will vote ‘yes’ on the motion to proceed and I would urge all of our colleagues to do the same,” he said in a speech on the Senate floor.

But a flurry of problems remained for McConnell as he insisted on taking up the troubled legislation, which must receive 50 votes to be approved, with Pence ready to break a tie.

His plan is catching flak from all sides — ranging from moderate senators who disagree with the Medicaid cuts to conservatives who don’t believe the package goes far enough to repeal the ACA, which they have campaigned against for seven years.

After it became clear last week there weren’t sufficient votes for the Senate package to repeal and replace the ACA that McConnell negotiated, the majority leader said the Senate would instead move to a straight repeal bill like one they voted on in 2015.

But there was confusion Monday about exactly which direction senators would go on Tuesday when and if the voting starts. And none of the options that McConnell has presented had won enough public support to guarantee passage.

“What are we proceeding to?” Sen. Rand Paul (R-Ky.), a conservative critic of the effort, wondered aloud to reporters.

On the opposite end of the spectrum,Collins, a centrist, said she would not vote “yes” to move forward on any of the plans that have been floated so far.

One emerging idea late Monday was to scale down the scope of the proposals and instead find a narrower bill. That would set up a House-Senate conference to resolve the differences between the two proposals, buying Republicans more time.

Cornyn confirmed Monday evening that congressional leaders were now leaning against the original plan, if the Senate could approve legislation, to have the House immediately approve the Senate bill once it was approved in the upper chamber.

“Initially there was some thought maybe the House would take up the bill we passed, but that may not be the case. So what we need to do is make progress,” Cornyn told reporters.

That point — just “make progress” — was echoed by Sen. Bob Corker (R-Tenn.), who held a robust conversation with GOP leaders on the Senate floor during votes and explained that the aim is just to make sure some legislative proposal passes in a bid to keep the effort alive.

Officially, the Senate plans to vote on a motion to proceed to a House-passed repeal-and-replace bill. But from there, that measure could be amended in any number of ways.

In his remarks Monday, McConnell referred to the 2015 repeal-only bill that passed with overwhelming GOP support but was vetoed by President Barack Obama.

McConnell said senators have another chance to vote for that measure, and this time “President Trump will use his pen to sign such legislation.”

The GOP leader did not mention the Senate bill to “repeal and replace” Obamacare simultaneously. Trump has pushed lawmakers not to give up on the simultaneous repeal-and-replace approach, leaving many scratching their heads about what direction McConnell would go should legislation advance to a full floor debate.

Cornyn said Monday that leaders hadn’t decided which version of the bill would come up if the motion to proceed succeeds — in part because they want to keep their options open.

“We’re trying to maximize the number of votes,” Cornyn told reporters. “What we’re trying to do is convince everybody that if they’d like to get a vote on their amendment, then they need to vote to proceed to the House bill.”

Martin said she hoped that “at the very least, at the end of this process” lawmakers could pass the 2015 repeal bill. Pye also voiced support for that measure.

But neither said they walked away from the meeting with a clear understanding of which amendments to the bill would be brought up in which order, if debate can even begin.

Paul Kane and Jenna Johnson contributed to this report.