Mayweather-McGregor: What does it mean for the sports of boxing and MMA? 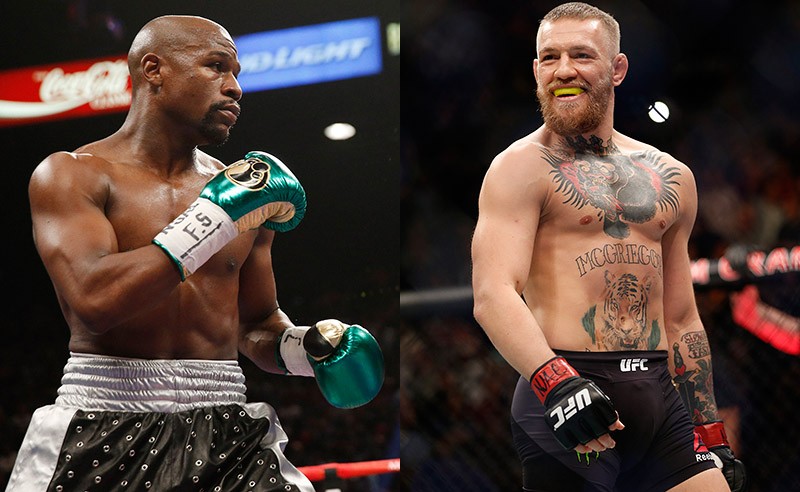 Well, we’ve really gone and done it now, and we’re past the point of no return. This fight is actually happening, and in one way or another, we are probably all to blame.

Floyd Mayweather, one of the greatest professional boxers of all time, will attempt to reach the monumental achievement of 50-0 — against Conor McGregor, who will be boxing professionally for the very first time.

The premise is silly, because whoever fights in his combat sports discipline — in this case, Mayweather — is obviously the mega-favorite.

But whether you like the fight or not, the main question is what impact it will have in boxing and MMA. Our boxing writer, Dan Rafael, and MMA writer, Brett Okamoto, debate what this fight will do for the respective sports.

Rafael: Boxing and MMA are different sports that happen to both include punching. But they are entirely different, which is why I strongly question whether a state athletic commission should even sanction the bout. But with so much money at stake — I think the pay-per-view could easily exceed 3 million buys — I can’t say I am surprised the fight will be sanctioned.

So now that it’s happening, what does it mean for boxing? Not much. If Mayweather wins, well, he was supposed to, without question.

If Mayweather loses, it would be a crushing blow to his unbeaten legacy and prevent him from reaching the hallowed 50-0 mark (even if it will be hollow if he obtains that record against a guy who has never boxed). But a Mayweather loss would not have any particular impact on the rest of the sport.

Mayweather hasn’t boxed since bowing out after rolling past Andre Berto in September 2015. Whether Mayweather wins or loses against McGregor, boxing matches at the highest level will still take place between today’s stars and life in the sport will go on.

When the subject of Mayweather-McGregor first came up I was apathetic. I didn’t think it would happen, but I also did not care one iota if did or did not. I’ve come around a bit on that because, as a boxing fan as well as a boxing writer, I love big events. Love Mayweather-McGregor or hate it one thing is certain: It is a mega event.

So I’ll cover the fight, enjoy myself and go along with the circus. As a one-off event, sure why not see it? Don’t get me wrong — I still can’t stand all the ridiculous back and forth numerous boxers and MMA fighters have engaged in as they call each other out for similar matches. But Mayweather-McGregor should be one and done.

“There’s a perverse part of me that wants to see it, but I watch WrestleMania,” said boxing promoter Lou DiBella. “I watch pro wrestling. It’s entertainment. Mayweather-McGregor is supposed to be entertainment. It’s the entertainment business, man.”

Boxing promoter Lou DiBella, one of the most outspoken guys you will ever talk to, is also of the opinion that a Mayweather-McGregor fight means very little for the sport of boxing, regardless of what happens.

“If Floyd Mayweather comes out of retirement and slaps around MMA’s poster child, then it doesn’t hurt boxing. But anyone who thinks it’s a big deal and changes the sport, they are wrong,” DiBella said. “A fight between Floyd Mayweather and Conor McGregor is nothing more than a spectacle.

“If the miracle of miracles happens, and McGregor lands and knocks out Floyd Mayweather — any man can land on another man even though it’s an unlikely scenario that a novice boxer would beat Floyd Mayweather — it’s not going to hurt boxing, really, but it won’t help boxing either. It won’t win over MMA fans or bring new fans to boxing.”

In the end, the fight will generate huge interest from boxing fans (and MMA fans) because it will be hyped like crazy. Think Muhammad Ali taking on wrestler Antonio Inoki in 1976 or the famed 1973 Battle of the Sexes tennis match between Billy Jean King and Bobby Riggs. Mayweather-McGregor will be one of those must-see events and then will fade quickly, with no lasting impression on either boxing or MMA.

“It will be a novelty like Ali-Inoki,” DiBella said. “It’ll be like when Evil Knievel tried to jump the Snake River Canyon.”

Of course, when daredevil Knievel attempted to jump the canyon in a steam-powered rocket in 1972 — in an event promoted by Top Rank’s Bob Arum, by the way — it was a bust because the rocket not only didn’t make it over the water but landed just a few feet from the riverbank, not far from where it took off. It was a huge disappointment.

A Mayweather-McGregor fight, while it will make a ton of money for those involved, probably will be as big of a bust competitively as was Knievel’s ill-fated jump. It will be a one-night-only event that will have no lasting impression on either sport.

Okamoto: It’s not that I absolutely hate this fight — I guess I’m slightly intrigued by it on some weird level — but I do hate a certain aspect of it.

McGregor, 28, is in his prime and in the middle of one of the most impressive string of performances his sport has ever witnessed. Interrupting that for some spectacle, however lucrative that spectacle may be, seems like a real shame in many ways.

In determining the impact this fight will have on mixed martial arts as a whole, the money to be made is a significant part. This event will undeniably make Conor McGregor very rich, which is 100 percent well-deserved. But will it also, in turn, shorten his MMA career?

If it does, that could prove to be this event’s greatest effect on MMA. Once this obscene payday, far greater than anything McGregor could pull in a UFC fight, officially hits his bank account, how motivated will the sport’s greatest superstar be to take on all comers in the UFC’s loaded lightweight division — for less money?

McGregor is one of the most obsessively competitive athletes in MMA, so maybe fears that he’ll walk away from so many great challenges in the UFC’s lightweight division are overplayed.

Conor McGregor has a powerful left hand and is one of the most accurate power strikers in the UFC. AP Photo/Isaac Brekken

McGregor is also obsessed with every fight feeling bigger than the last. And this one against Mayweather will be hard to top.

As far as any general impact on the perception of MMA itself, I see this only as a positive — although not a massive one. Even if McGregor is grossly outclassed, which is likely, I don’t think it will happen in such a way that MMA will be poorly represented. McGregor will at least try. If there’s one thing I don’t think we’ll see in this fight, it’s him giving up and counting seconds until the final bell.

The exposure this will bring to the sport is a big positive. Even though it’s a boxing match, MMA and UFC will obviously be a major, major piece of the discussion. That’s always a win.

This is a complicated moment in combat sports history — and it’s still shocking that it all came together when you think about the players involved. But in the end, its overall impact on MMA is actually pretty easy to quantify.

It’s a thunderstorm of Benjamins for the parties involved and a whirlwind of mainstream media attention for a sport that constantly craves it.

It’s a crazy, crazy, crazy opportunity for MMA’s biggest star to land one perfect left hand for the ages, setting off an explosion of heads across the globe. It’s getting a peek into an alternate universe.

But hopefully, years from now, it isn’t remembered as the night that forever changed McGregor’s “anyone, anytime, anywhere” mentality in his real profession.