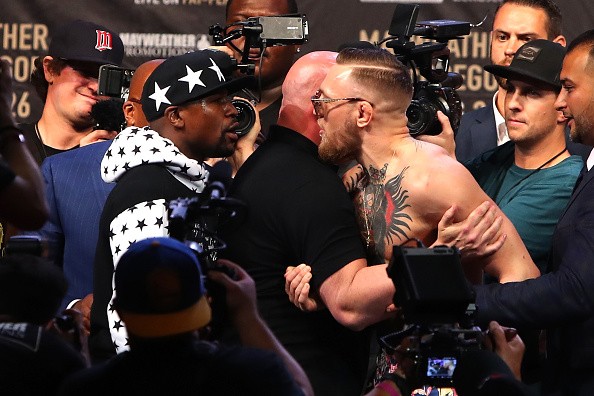 The NSAC voted unanimously in favor of a one-time exception that will allow both fighters to wear 8-ounce gloves in their 154-pound bout. Per NSAC regulations, any boxing match contested above 147 pounds mandates 10-ounce gloves.

Chairman Anthony Marnell, who strongly chastised both camps for using the NSAC as a “pawn” for social media controversy to sell tickets, noted that while he holds a strong respect for the commission’s rules, it must always “adopt it to current times.”

The issue came to light on Aug. 1, when Mayweather (49-0, 26 KOs) wrote on Facebook: “Let’s fight in 8 oz gloves.” Mayweather, 40, has fought the majority of his career in 8-ounce gloves. McGregor (21-3), the UFC’s lightweight champion, is used to 4-ounce gloves in mixed martial arts.

Both fighters submitted a waiver to the NSAC this month, requesting the smaller glove size.

According to longtime commission member Skip Avansino, the rule for 10-ounce gloves went into effect in 2006, based on the recommendations of an advisory committee. At that time, the committee stated its recommendations were not based on scientific fact and encouraged the NSAC to fund a study on the matter.

That study is now planned for after Aug. 26. The rule will remain in place for now, with this one-time exception for the Mayweather-McGregor bout.

One point articulated by Marnell, which every other commission member echoed, is that referee selection is the most important factor in fighter health and safety, particularly in a “unique” matchup such as this. During Wednesday’s meeting, the NSAC appointed veteran official Robert Byrd to oversee the bout.

“The number one line of defense is the referee,” Marnell said. “It always will be.”

Another concern regarding glove selection was the distribution of padding. The bout contracts mandate foam gloves be used, and not Mexican horsehair gloves, which are known more as “puncher’s gloves.”

In addition to regular inspections, Marnell, as well as other commission members, will inspect each fighter’s gloves prior to the fight. Alternative gloves not selected for the bout will be donated to the NSAC’s study.

The nonprofit organization dedicated to the health and safety of boxers and mixed martial artists said before the ruling that lighter gloves was a bad idea.

“This is a bout that has already been set [at] a specified weight class,” Dr. Raymond M. Monsell, chairman of the Association of Ringside Physicians, wrote to the commission on Tuesday. “Unless there is scientific evidence to support the view that such a change might improve the safety of this bout, we would strongly caution against allowing current regulations to be overruled. To do so would also set a precedent for future bouts.”

Speaking to ESPN late last week, McGregor predicted he would need only two rounds to dispatch Mayweather if the commission approved 8-ounce gloves.

Shortly after the NSAC’s ruling, longtime Mayweather adviser Leonard Ellerbe told ESPN they wanted McGregor’s confidence to be high going into the fight.

“Floyd wanted Conor to be as comfortable as possible, so there wouldn’t be any excuses,” Ellerbe said. “Conor has vowed he’ll knock out Floyd in four rounds. He recently corrected that and said if the commission approved 8-ounce gloves, he doesn’t give Floyd two rounds.

“I have no reason to believe he’s not feeling very confident and I want him to continue to have that confident attitude.”

Information from ESPN’s Dan Rafael was used in this report.