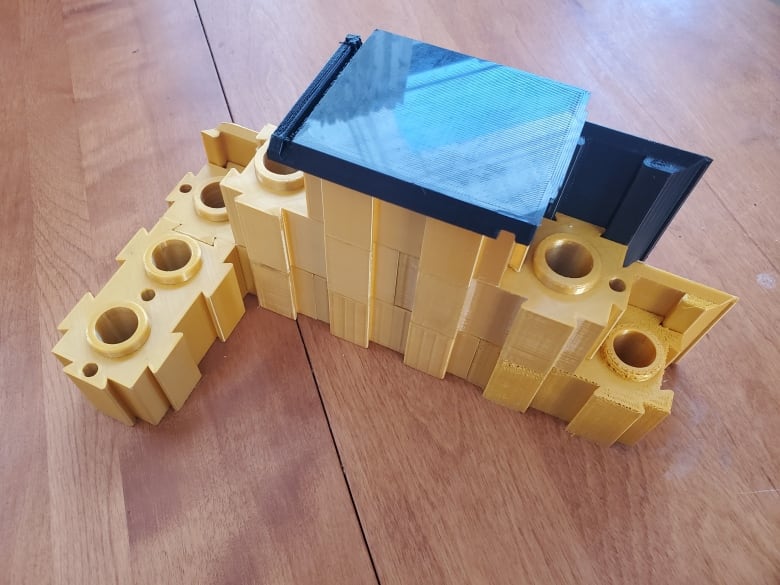 A startup in Hampstead, N.B., plans to gather up all that plastic at the end of its life and transform it into a low waste, sustainable construction material.

In a social media video shot in a shipping container in his backyard, Dustin Bowers wears protective goggles and throws plastic garbage into a funnel that grinds it up into shreds.

From these shreds of trash, the founder and product developer of PLAEX Building Systems Inc. has created a no-cut, mortarless and reusable system of interconnecting bricks and finish panels — basically Lego for real life structures.

Bowers is a carpenter from a family of tradespeople, but after a few years managing multi-million dollar construction projects out West, he could no longer ignore the “insane” amount of waste it generates.

“That’s a huge cost on business,” he said. “If we keep doing this, there ain’t going to be a planet for our kids.”

Bowers claims that producing PLAEX uses less energy than current recycling methods and very little water thanks to a closed-loop system. All of which helps lessen its ecological impact.

He first came up with the idea in 2017 and has developed a prototype that is currently being tested for CSA approval and should be ready for purchase orders by August.

Although initially the product will be certified for use in non-occupied structures only, such as retaining walls, flood walls, garages and sheds, eventually he hopes to have it approved for building houses.

When it came to securing a reliable source for plastic waste, Bowers saw another problem he could tackle. He had experience in market gardening and knows how integral plastic is in even the most eco-conscious farm and garden practises.

“A lot of farmers have to bribe their garbage man to get rid of it,” he joked. “It’s a problem.”

He reached out to David Wolpin, who runs a farm supply company in Bloomfield, N.B., that services the Maritimes.

“I said, well, actually, I can help you set up your whole supply chain,” said Wolpin. “Basically, if you take all the stuff that I sell a few years after I sell it, you’re in business.”

Raised by “recovering hippies,” Wolpin said the fact that he sells tonnes of plastic every year weighs on his conscience. Most of that plastic is used for between three and ten years.

Ultimately, he said, he feels great about supporting local producers  — they help reduce carbon emissions from importing food and keep food dollars in the local economy.

The plastic he sells helps them extend the local growing season and reduces the use of toxic pesticides by discouraging weed growth and pest damage.

Wolpin is currently working with Bowers on a Maritime-wide plastic waste collection service for farmers.

They produce 30 to 35 crops on two acres of cultivated land. Stephen Besaw said they primarily use plastic for greenhouses and as a reusable ground-cover fabric.

One sheet of greenhouse plastic, neatly folded and waiting for disposal, is six by ten feet and weighs about 300 pounds, he said.

Like many producers, they strive to limit plastic use, but it is crucial to their operation. For example, ground-cover fabric saves them money by reducing the need for manual weeding and labour is their number one expense, said Besaw.

They reuse plastic as much as possible, repurposing it as tarps to kill weeds on land they plan to cultivate. But eventually, it makes its way to the landfill. They’d be thrilled to avoid that.

He said building an average house generates between two and four metric tons of garbage.

He thinks PLAEX is innovative in a Canadian context, and likes that it tackles waste in two ways.

First, he said, it diverts plastic from the landfill where it has been a big problem for municipal waste management. Secondly, if the Lego-like, no-cut system can eliminate or even greatly reduce construction waste, “it’s a big plus,” he said.

Robertson said the building industry is looking for products that have a lower carbon footprint.

“If recycled plastics can demonstrate that as compared to current alternatives, I think it would be highly regarded in the industry,” he said.