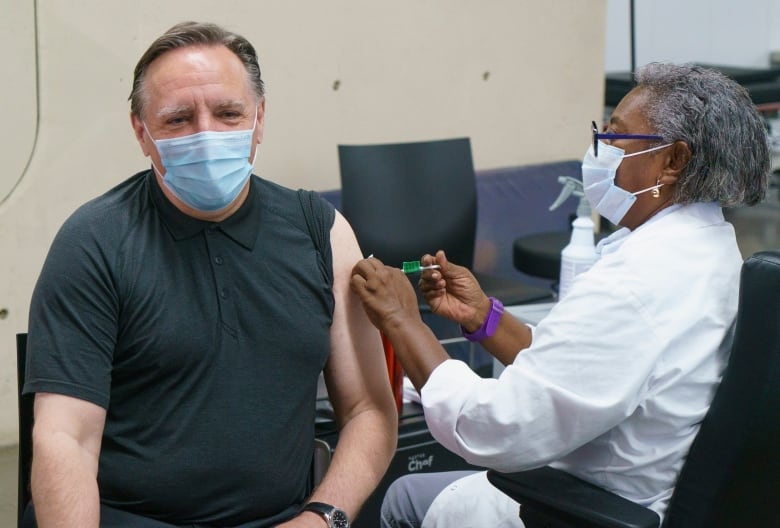 There were no new cases of COVID-19 reported in Nova Scotia, New Brunswick or Prince Edward Island on Monday, as the number of new cases reported continued to trend downward nationally.

Nova Scotia’s top doctor, Robert Strang, said in a statement that Monday’s report was the first time the province had reported zero new cases since March 29.

“We should all be proud of our efforts to get to this point, but please don’t let your guard down,” the chief medical officer of health said in a statement.

New Brunswick also reported no new cases of COVID-19, as the province expanded eligibility for second doses of vaccines.

In Prince Edward Island, there were no new cases of COVID-19 reported on Monday as the province announced changes to the way people can apply for the P.E.I. Pass.

The pass, which the province says “verifies you are fully or partially vaccinated,” would be used to bypass self-isolation for those travelling within Atlantic Canada and the Magdalen Islands — provided the traveller meets the conditions.

-From CBC News and The Canadian Press, last updated at 7:05 a.m. ET

As of early Tuesday morning, Canada had reported 1,409,607 confirmed cases of COVID-19, with 11,025 considered active. A CBC News tally of deaths stood at 26,087. More than 32.3 million COVID-19 vaccine doses have been administered so far across the country, according to CBC’s vaccine tracker.

In Quebec on Monday, health officials reported no new deaths and 90 new cases of COVID-19 — the lowest single-day number reported in the province since last August. The update came as Premier François Legault received his second dose of COVID-19 vaccine.

In the Prairie provinces on Monday, Manitoba reported one death and 74 new cases of COVID-19. The province had not seen a single-day case number that low since April 6.

Saskatchewan, meanwhile, reported two deaths and 48 new cases of COVID-19. The update came as health officials said there were 76 people in hospital due to COVID-19, the lowest level of hospitalizations in the province since November.

In Alberta, health officials on Monday reported two deaths and 60 new cases — the lowest single-day case number seen in the province since August.

Across the North on Monday, Yukon has confirmed 30 new cases of COVID-19 since Saturday, bringing the total number of active cases to 100. The government said in a statement that screening results show all cases since June 4 are positive for the gamma variant first identified in Brazil. Officials said the cases are primarily affecting unvaccinated people and COVID-19 is now present in most Yukon communities.

There were no new cases reported in Nunavut or the Northwest Territories.

In British Columbia on Monday, health officials reported that 45 cases were recorded on Monday, part of the 229 cases the province reported over a three-day period. The province also reported three additional deaths,

-From CBC News and The Canadian Press, last updated at 7 a.m. ET

As of early Tuesday morning, more than 178.8 million cases of COVID-19 had been reported worldwide, according to data compiled by U.S.-based Johns Hopkins University. The reported global death toll stood at more than 3.8 million.

In the Asia-Pacific region, the Philippine president has threatened to order the arrest of Filipinos who refuse COVID-19 vaccination and told them to leave the country if they would not co-operate with the efforts to contain the pandemic.

President Rodrigo Duterte, who is known for his public outbursts and brash rhetoric, said in televised remarks Monday night that he has become exasperated with people who refuse to get immunized then help spread the coronavirus.

“Don’t get me wrong. There is a crisis being faced in this country. There is a national emergency. If you don’t want to get vaccinated, I’ll have you arrested and I’ll inject the vaccine in your butt,” Duterte said.

“If you will not agree to be vaccinated, leave the Philippines. Go to India if you want or somewhere, to America.”

He went on to say that he would order village leaders to compile a list of defiant residents.

A human rights lawyer, Edre Olalia, raised concerns over Duterte’s threat, saying the president could not order the arrest of anybody who has not clearly committed any crime.

Kazakhstan, meanwhile, warned on Tuesday that the more infectious delta variant of the coronavirus had reached its capital as other Central Asian countries saw fresh spikes in cases.

In Africa, the World Bank and the African Union said they would work together to accelerate COVID-19 vaccinations for up to 400 million people across Africa, bolstering efforts to vaccinate 60 per cent of the continent’s population by 2022.

In the Americas, the White House laid out a plan to share 55 million U.S. COVID-19 vaccine doses globally, with roughly 75 per cent of the doses allocated to Latin America and the Caribbean, Asia and Africa through the COVAX international vaccine-sharing program.

Reported deaths from COVID-19 in Colombia passed 100,000, the country’s health ministry said, amid warnings of potential scarcity of treatment drugs and oxygen in hospitals.

In the Middle East, Israel has recommended that all 12- to 15-year-olds be vaccinated, citing new outbreaks attributed to the more infectious delta variant.

In Europe, mask-wearing outdoors in Italy will no longer be required in virtually all of the country starting on June 28.

Health Minister Roberto Speranza tweeted Monday night that the mask requirement for outdoors will be eliminated in those parts of Italy in designated “white zone” regions, where COVID-19 case rates are low and ICU admissions of the illness are below thresholds considered at risk for overwhelming hospitals.

Currently all but one small region, in northwest Italy, have “white zone” designations.

Masks will still be required to be worn on public transport and well as indoors. Nearly 30 per cent of people in Italy 12 or older have been fully vaccinated against COVID-19.

-From The Associated Press and Reuters, last updated at 6:55 a.m. ET