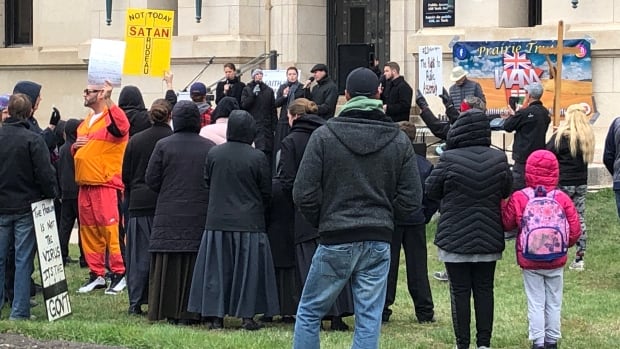 A Manitoba judge has ruled pandemic restrictions put in place by the province last year were not a violation of charter rights, in response to a court challenge brought by seven rural Manitoba churches and three individuals last December.

In two separate decision handed down Thursday, Court of Queen’s Bench Chief Justice Glenn Joyal said he found that the public health orders were reasonable limitations on the group’s charter rights in the context of the pandemic, and that Manitoba’s chief public health officer did have the authority to execute them.

The group had argued measures instituted by the province last year to curb the spread of COVID-19 were unjustified violations of charter-protected freedoms of conscience, religion, expression and peaceful assembly.

Joyal found that the restrictions did infringe upon certain charter rights, but that the province was justified in doing so given the severity of the pandemic.

He said that while fundamental freedoms should not disappear in a pandemic, he accepted that the Manitoba government had to make swift, decisive decisions in order to regain control of the virus and save lives.

“Those witnesses who testified on behalf of Manitoba and who were in a position to exercise the necessary authority, made it clear that they did not believe that they ‘could afford to get it wrong,'” Joyal wrote.

The judge also said he found the province’s witnesses credible and reliable, and accepted that the restrictions were based on “well-accepted public health consensus.”

The applicants, by contrast, had failed to make a convincing argument that there was insufficient proof to justify the restrictions, saying that the evidence they presented in court represented “at best, a contrary if not contrarian scientific point of view.”

At the time the challenge was brought forward, Manitoba was in the midst of the second wave of the pandemic, with hundreds of people in hospital and multiple deaths from the illness each day.

Just days before the group filed court documents, Manitoba recorded 19 deaths from COVID-19 — the highest number in a single day in the province during the pandemic thus far.

Manitoba moved to the red, or critical, level of its pandemic response system on Nov. 12, and restrictions were soon tightened even further, ushering in widespread closures to the retail sector, places of worship and a range of other services deemed non-essential.

Eric Adams, vice dean of the faculty of law at the University of Alberta, and an expert on constitutional law, said those types of restrictions would clearly have been considered unconstitutional pre-pandemic.

The real question at the centre of the case was whether it was reasonable to infringe upon them in order to protect people’s health, and the integrity of the health-care system overall, he said.

“This was of course an extraordinary moment and so all of that work turns to whether that is reasonable to interfere with our freedoms in the moment of a deadly pandemic,” he said.

Manitoba Justice Minister Cameron Friesen said Thursday’s decision confirms the government’s position that its public health orders during the pandemic do not violate the Charter of Rights and Freedoms and that the chief provincial public health officer does have the authority to issue them.

“Our government has responded to the pandemic and enacted reasonable measures to prevent the spread of the virus, keep our most vulnerable citizens safe, and prevent the overwhelming of the hospital system,” he said.

Head of group behind challenge had judge followed

The group behind the court challenge was represented by the Calgary-based Justice Centre for Constitutional Freedoms, which has launched a number of similar court cases across Canada challenging public health measures.

In a statement from the centre, Allison Pejovic, one of the lawyers who represented the applicants, said they are reviewing the decision and are considering an appeal.

“We are disappointed in these decisions and in the unwavering deference accorded to public health officials,” Pejovic said.

Later, in an email to CBC News, Pejovic said the group feels Joyal didn’t address their concerns with PCR testing for COVID-19, and what they feel is a lack of evidence that the virus can spread outdoors.

In July, the head of the centre, John Carpay, was put on an indefinite leave after admitting he hired private investigators to follow both Joyal, as he was presiding over the case in Manitoba, and some other senior government officials.

Carpay has since been reinstated.

During two weeks of hearings in May, lawyers for the group of churches presented a case that the province had failed to consider the social costs and impacts on people’s mental health from the restrictions.

Ahead of the hearings, numerous affidavits were filed by both the group and the Manitoba government that were then subject to cross examination in open court.

Among the first witnesses to appear in court was Tobias Tissen, a pastor with the Steinbach-area Church of God, who said he had “no authority scripturally based and based on Christian convictions” to impose the restrictions and prevent people from attending church.

Tissen and his church have repeatedly flouted the province’s public health measures during the pandemic and participated in protests against the restrictions. Earlier this week, Tissen was arrested for violation of the orders, after an arrest warrant was issued earlier this year.

Outspoken critic of lockdowns testified on behalf of the group

In addition, the group had called Dr. Jay Bhattacharya, a professor of medicine at Stanford University who has criticized lockdowns in the United States, as a key expert witness.

Bhattacharya is a co-author of the Great Barrington Declaration, a theory that governments should limit restrictions only to those at high risk of severe outcomes and let the virus spread naturally in order to build herd immunity.

Joyal said he found that despite Bhattacharya’s credentials, his views were not supported by most of the scientific and medical community.

Thus, there was little evidence in his testimony “that would cause me to seriously doubt the science upon which Manitoba is relying,” Joyal said.

Manitoba’s former chief public health officer, Dr. Joel Kettner, who also testified as an expert witness on behalf of the group, was hesitant to say that all pandemics are difficult during cross-examination.

Meanwhile, the province’s lawyers argued the restrictions were a necessary limitation on personal freedoms to prevent the spread of COVID-19 and keep the health-care system from being overwhelmed.

Witnesses for the province included Chief Provincial Public Health Officer Dr. Brent Roussin, who testified that the measures were not imposed lightly and that personal and economic impacts were taken into account.

Lanette Siragusa, Manitoba Shared Health’s chief nursing officer, also testified on behalf of the province, telling the court during cross examination that the province’s health-care system was stretched incredibly thin during the second wave of the pandemic.

Joyal said he found that Roussin gave straightforward and credible evidence in both his affidavit and on cross examination that backed up his rationale for the public health orders.

“Following his testimony, I find he performed reasonably in attempting to respond to a public health emergency with measures that, however difficult, restricted freedoms no greater than necessary,” Joyal wrote.