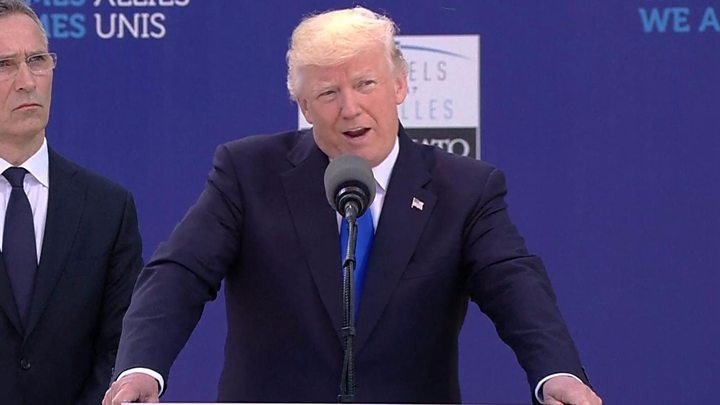 Leaks to American media about the investigation into the Manchester Arena attack are “deeply troubling”, US President Donald Trump has said.

They were a “grave threat to our national security”, he added, and pledged to get to the bottom of them.

US media published photos of evidence from the scene of Monday night’s blast.

Earlier, UK police said they had stopped sharing information with the US as a consequence but those ties have now been resumed.

The decision to end the suspension was taken after assurances were received by counter-terrorism officers in the UK.

A diplomatic tiff broke out after the New York Times published photos on Wednesday appearing to show debris from the crime scene, including bloodstained fragments from the bomb.

The move outraged British police and government officials, and prompted Mr Trump to address the matter during a visit to Brussels.

“These leaks have been going on for a long time,” he said.

He pledged to ask the US Department of Justice to launch a review, and “if appropriate, the culprit should be prosecuted”.

“There is no relationship we cherish more than the special relationship between the US and the UK,” he added.

Meanwhile, police have been assessing “potentially suspicious items” found at a property in Wigan, some 16 miles from the scene of Monday night’s attack.

A street was evacuated for several hours and a bomb disposal unit called in. The cordon has now been lifted and residents have been allowed to return to their homes.

No controlled explosion was carried out, but the search at the address continues.

The raid comes after Salman Abedi blew himself up at the end of an Ariana Grande concert three days ago, killing 22 people and injuring 116.

Mr Trump, who is at a Nato summit along with UK Prime Minister Theresa May, paid tribute to those who died in the attack.

“Innocent little girls and so many others were horribly murdered and badly injured whilst attending a concert,” he said.

“Beautiful lives with so much great potential, torn from their families for ever and ever. It was a barbaric and vicious attack upon our civilisation.

“All people who cherish life must unite in finding, exposing and removing these killers and extremists, and yes, losers, they are losers.

“Wherever they exist in our societies we must drive them out and never, ever let them back in.”

Abedi detonated his “nuts-and-bolts” bomb at the end of the gig as people were making their way out of the arena.

Others were waiting in the foyer to pick up family and friends.

Security officials say they have thwarted 18 plots since 2013, including five since the Westminster attack in March.

Why are the UK authorities so angry?

Greater Manchester Police were said to be “furious” with the New York Times’ report and said they would temporarily stop sharing information with the US.

The New York Times newspaper defended its decision to publish the pictures, saying they were “neither graphic nor disrespectful of victims”.

Prime Minister Theresa May said she would make clear to Mr Trump that shared intelligence must remain secure, at the Nato summit.

UK officials believe that US law enforcement rather than the White House is the likely culprit for the leaks, BBC security correspondent Gordon Corera says.

What’s been happening in Manchester?

The Queen has been to the Royal Manchester Children’s Hospital to meet some of the injured, and members of the emergency services.

During her visit, she paid tribute to Manchester and the “extraordinary” way the city had responded to the attack.

Earlier, a minute’s silence fell over offices, public squares, shops and in homes as people honoured the victims.

In St Ann’s Square, a perfectly-observed silence was followed by applause, cheers and a spontaneous crowd rendition of the Oasis song Don’t Look Back in Anger.

“It wasn’t something that I’d planned or thought about, but I had been thinking about that song in particular in the past few days.

“Everyone started joining in and it was really beautiful. You should drown out any of the fear and hate with beautiful voices. That’s the best thing to do.”

What’s happening with the investigation?

Police believe Manchester-born suicide bomber Salman Abedi, from a family of Libyan origin, acted as part of a network.

Whitehall sources say 22-year-old Abedi was among a “large pool of people whose risk was kept under review” by security services.

The bomber’s older brother Ismail, 23, is among the eight men arrested. A woman was also arrested but has since been released.

Raids involving controlled explosions have been carried out at flats in the city centre and at an address in the Moss Side area of Manchester.

In the Libyan capital Tripoli, Abedi’s younger brother Hashem, 20, and their father, Ramadan, were held by special forces linked to the interior ministry.

Of the 22 victims killed at Manchester Arena, 21 have been named.

The youngest known victim so far is eight-year-old Saffie Roussos from Lancashire, who was described as “simply a beautiful little girl” by her head teacher.

The oldest victim was Jane Tweddle-Taylor, 51 and from Blackpool, who had gone to the arena with a friend to pick up her friend’s daughter.

An off-duty Cheshire police officer Elaine McIver was also among the dead.

In a statement, her family said: “Despite what has happened to her, she would want us all to carry on regardless and not be frightened by fear tactics.”

On Thursday evening, well-wishers in a convoy of bikes, scooters and cars adorned with pink ribbons and balloons wound their way from Bury to Manchester to pay tribute to 15-year-old Bury victim, Olivia Campbell.

What more do we know about the attacker?

His sister, Jomana, has said she believed her brother may have been reacting to US-led strikes in the Middle East.

“He saw the explosives America drops on children in Syria, and he wanted revenge.

“Whether he got that is between him and God,” she reportedly told the Wall Street Journal.

It is also being reported that a Libyan government spokesman said 15 minutes before he blew himself up, Abedi called his mother and brother.

His movements in the run-up to the attack have also come into focus, with reports that he left the UK for a while, but returned in the days before the bombing.

During a trip back from Libya, where his parents now live, he briefly stopped at Düsseldorf Airport, having reportedly been in Prague, but remained in the airport’s transit zone.

The BBC also understands Abedi was in Manchester earlier this year, when he told people of the value of dying for a cause and made hardline statements about suicide operations and the conflict in Libya.

Greater Manchester Police would not comment on these claims.

In recent days, former classmates of Abedi have variously described him as jokey, gullible and short-tempered.

Another, who did not want to be named, told the BBC’s World At One Abedi did not “come across as an intelligent person”.

Asked whether he thought Abedi might have been manipulated by more intelligent people, he replied: “A hundred percent.

“I can’t imagine the idea that he would be able to go through with such a complicated procedure. He must have had help.”

“I wasn’t shocked,” the classmate added. “He fits the profile for a suicide bomber.”

Profile: Who was Salman Abedi?