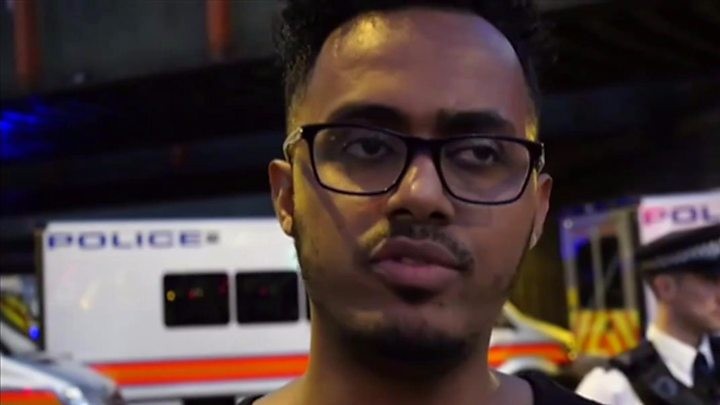 A man has died and 10 people have been injured after a man drove a van into worshippers near a north London mosque.

The Met Police said eight were taken to hospital and several were seriously injured in the “terrorist attack”.

The van hit people just after midnight BST who were attending to a man who had collapsed in the street. He later died, but his cause of death is unclear.

Police said all the victims were Muslim and that a 48-year-old man was arrested on suspicion of attempted murder.

Eyewitness Abdul Rahman said the driver said he wanted to “kill all Muslims”.

Mr Rahman told the BBC he struck the man and helped subdue him.

“I hit him on his stomach… and then me and the other guys… we held him to the ground until he couldn’t move. We stopped him until the police came.”

Metropolitan Police’s deputy assistant commissioner Neil Basu said the “terrorist attack” began when the van was driven into a man who was already being given first aid by the public on the pavement.

“Sadly that man has died. It is too early to state if his death was a result of this attack.”

All the victims were Muslim, several are “seriously injured” and there are currently no-other suspects, he added.

He also said his “thoughts and prayers” were with those affected by the “horrific terrorist attack on innocent people”.

“While this appears to be an attack on a particular community, like the terrible attacks in Manchester, Westminster and London Bridge it is also an assault on all our shared values of tolerance, freedom and respect.”

Forensics officers are examining a white van which has Pontyclun Van Hire on it – a firm from Rhondda Cynon Taff in Wales.

Harun Khan, secretary general of the Muslim Council of Britain said: “Over the past weeks and months, Muslims have endured many incidents of Islamophobia, and this is the most violent manifestation to date.

“We expect the authorities to increase security outside mosques as a matter of urgency.”

Many of the victims are believed to have just left evening prayers at the Muslim Welfare House after breaking the Ramadan fast.

It has appealed for calm, adding that “all of our efforts should be towards getting justice for the victims and ensuring our community stays the diverse, tolerant and welcome place we know it to be”.

The prime minister will chair a meeting of the emergency Cobra committee later.

Mrs May described it as a “terrible incident”, adding: “All my thoughts are with those who have been injured, their loved ones and the emergency services on the scene.”

If confirmed as a terror attack it would be the fourth such incident in the UK in four months, after attacks in Westminster, Manchester and on London Bridge.

The van driver was arrested after being detained by members of the public at the scene following the collision at 00:20 BST.

Police said there were no reports of anyone suffering from knife injuries after speculation at the scene the driver was armed with a knife.

Abdulrahman Saleh Alamoudi said he was among a group of people helping an elderly worshipper who had fallen down when the van swerved towards them.

Video posted online of the aftermath showed a scene of chaos as people tried to help the injured.

One man could be seen giving CPR to a victim in the street while another man’s head injury was treated with a makeshift dressing.

An eyewitness told how he jumped out the way of the van as it struck.

He said: “He just came into all of us. There was a lot of people. We got told to move straight away.

Another who lives in a flat on Seven Sisters Road told the BBC she saw people “shouting and screaming”.

“Everyone was shouting ‘a van’s hit people’.

“There was this white van stopped outside Finsbury Park Mosque that seems to have hit people who were coming out of the mosque after prayers finished.”

She said the road was “backed up” with police cars, ambulance and fire engines.

Some witnesses at the scene – near Finsbury Park Station and Arsenal’s Emirates stadium – said more than one attacker may have been involved.

But the Met said: “At this early stage of this investigation, no other suspects at the scene have been identified or reported to police, however the investigation continues.”

Home Secretary Amber Rudd described it as an appalling incident, and said new funding for security at religious sites had recently been arranged.

Environment Secretary Michael Gove said the attack was a “disgusting and immoral act”.

“Words fail me that someone could find it in their heart to behave in this way.”

“I’ve been in touch with the mosques, police and Islington council regarding the incident. My thoughts are with those and the community affected by this awful event.”

Green Party co-leader Caroline Lucas said she was thinking of the community and emergency services, adding: “We will not be divided.”

Witness Cynthia Vanzella said on Twitter: “Horrible to watch police officers doing cardiac massage at people on the floor, desperately trying to save them. I just hope they did.”

The MCB said its “prayers are with the victims”.

Are you at Finsbury Park? Did you witness the events? If it’s safe to share your experiences then please email haveyoursay@bbc.co.uk with your stories.