Lytton, B.C., looks to its history as it starts to rebuild after devastating wildfire 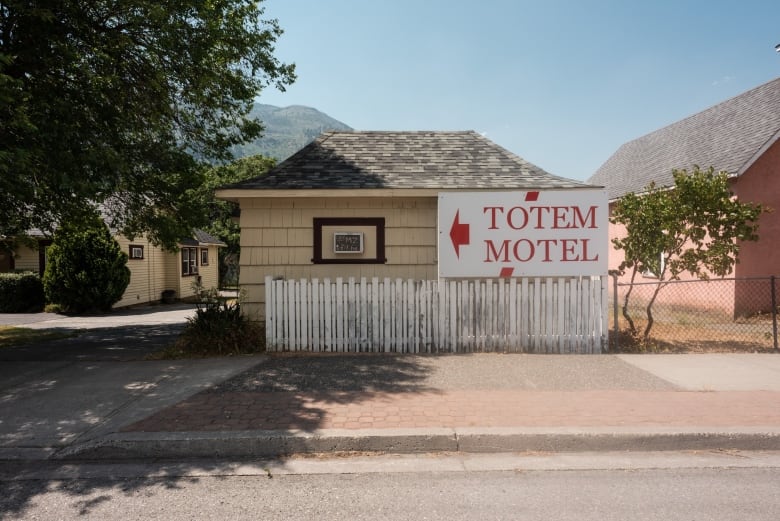 Vancouver-based photographer Kathryn Mussallem was most likely the last tourist to visit the village of Lytton, B.C., before it was devastated by a fire.

Mussallem was on her way up to Williams Lake, in the central Interior of the province, last Wednesday to visit a friend when she dropped by the Fraser Canyon town to snap a few shots.

About three hours later, a fire tore through the village and destroyed most of it. Two people were killed in the fire, and several more were injured.

Mussallem could have taken the Coquihalla Highway to get up to Williams Lake. But while it would have shaved off about an hour of her trip, she felt she would have missed out on all the unique sights that the small towns of the Fraser Canyon have to offer.

For about half an hour, she walked around capturing Lytton’s buildings like the Totem Motel, the local pool and the tourist office. She also captured plumes of smoke from a nearby wildfire looming over the town — which, it turns out, does not appear to be the cause of the blaze that later overtook the streets.

Mussallem didn’t stay much longer because of the oppressive, record-breaking heat that had lingered for days. Later that night, she found out the town had been ravaged by flames.

As the people of Lytton begin to recover from the devastating loss of their homes and local businesses, some are starting to look ahead at how the village might rebuild. Many point to Lytton’s historical and geographical significance as a sign that regeneration is inevitable.

Bernie Fandrich, chair of the local chamber of commerce, thinks Lytton still has a lot more life left in it.

“There’s a few of us who are working very hard on trying to formulate a plan for the future,” he said over the phone from his car on the way back to his home on the outskirts of Lytton Thursday.

“I think what’s going to happen, we are going to become a model community for North America.”

Barbara Roden, mayor of the nearby town of Ashcroft and editor of the Ashcroft Cache Creek Journal, says Lytton is one of the oldest continuously inhabited communities in the province.

About 250 people live in Lytton proper, but there are more than 1,500 residents in the surrounding area.

Its location at the at the confluence of two waterways — the Fraser and the Thompson rivers — and nestled among three mountain ranges made it a natural meeting point for the Nlaka’pamux First Nations of the area who have been there for thousands of years.

“Lytten was the heart of that First Nations area,” Roden said. “It was an important crossroads for First Nations people and then again for the white settlers when they started arriving in the early 19th century.”

Roden says a stampede of gold panners made their way to the area in 1858 when gold was first discovered. People sought out supplies at the small towns along the Fraser Canyon, with Lytton at the centre of that activity.

Later, as the gold rush faded and cars overtook horses as the most popular mode of travel, the Fraser Canyon became known as a spectacular drive and tourism became a main feature of the local economy.

Roden grew up in the Metro Vancouver city of Richmond and as a child would make the journey along the Fraser Canyon to her family’s cabin in Ashcroft. She says she’s seen a lot of change in the area during that time, most notably when the Coquihalla Highway was finished in 1986.

The newly built motorway provided faster access to the Interior from the Lower Mainland. It also obliterated much of the tourism along the Fraser Canyon.

“All these towns that used to be thriving have faded because there just isn’t the traffic to sustain a lot of the businesses.”

Fandrich, the chamber of commerce chair, says the region has remained an attraction for outdoor enthusiasts and was known for some time as the whitewater rafting capital of Canada.

In recent years, Lytton has attracted people like Mussallem who are keen to get off the beaten track and take in the town’s picturesque backdrop.

“People love to come here,” Fandrich said. “They can’t believe how friendly it is. People smile and wave to you and they don’t even know you.”

Fandrich believes that the same features that lead Lytton to self-proclaim itself as “Canada’s hot spot” can also serve to make it a model community of the future.

He thinks officials can find a way to harness that heat and turn it into energy. Fandrich admits he’s short on details on how to make that happen, exactly, but he believes the people of Lytton will find a way forward.

“The will is there,” he said. “I’m very positive about the future.”

Evacuation centres have been set up throughout the province to assist anyone evacuating from a community under threat from a wildfire. To find the centre closest to you, visit the Emergency Management BC website.

Emergency Management BC is requesting that those who know of a person who may have been in Lytton on June 30, 2021 and who cannot be accounted for, call or attend any RCMP Detachment to report that person missing.