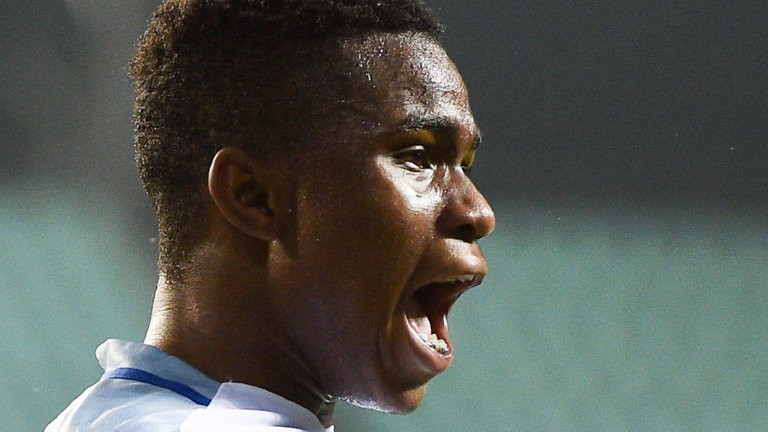 Ademola Lookman fired England U20s into the quarter-finals of the U20 World Cup with a double in a 2-1 win against Costa Rica in the last 16.

The Everton youngster, who scored on his first-team debut in the Premier League against Manchester City, showed a great maturity in front of goal to net either side of half-time as Paul Simpson’s men continued their impressive run.

Having qualified as group winners, which included a 3-0 victory over Argentina, England looked threatening in attack throughout the clash in Korea with the attacking trio of Lookman, recent Liverpool signing Dominic Solanke and Everton’s Dominic Calvert-Lewin linking up to good effect.

It wasn’t all plain sailing for Simpson’s youngsters though as Costa Rica’s Randall Leal scored late on and Ian Smith had a goal controversially ruled out for offside when England were 1-0 ahead.

England now will play one of Mexico or Senegal in Monday’s quarter-final.

The story may have been much different had England defender Dael Fry been given a red card inside 10 minutes for tugging back Leal when he scampered clear towards goal. However, the referee only brandished a yellow card and Leal wasted the opportunity from the free-kick.

England did settle after their nervy opening and took the lead on 35 minutes. Solanke, who is set to join Jurgen Klopp’s side in July from Chelsea, whipped a ball out wide for Jonjoe Kenny – another impressive Everton youngster – to chase.

The full-back found Toffees team-mate Lookman in the middle and he squirmed a shot through Adonis Pined for his first goal of the tournament.

A ball in from the right found Smith at the back post and he fired a low effort that deceived Freddie Woodman, who was perhaps unsighted by a Costa Rica attacker standing in front of him. After about 10 seconds of deliberation, the referee decided to rule out the goal for offside as the Costa Rica player was deemed to be interfering with play.

Simpson’s side maximised their fortune gained from that decision and doubled the lead following a flowing counter attack. Once again Solanke was involved in the move, winning a flick on which found Calvert-Lewin down the left. His cross was seized upon by Lookman, who had hit the bar three minutes earlier with a cracking free-kick.

England had opportunities to make the game safe but both Calvert-Lewin and substitute Adam Armstong were denied by Pineda.

This always left the door open for the plucky Costa Ricans and they pulled one back with three minutes to play through Lear, whose effort from the penalty spot was saved by Woodman but he thumped home the rebound.

England dropped deeper in the closing stages, but held on for a place in the last eight.