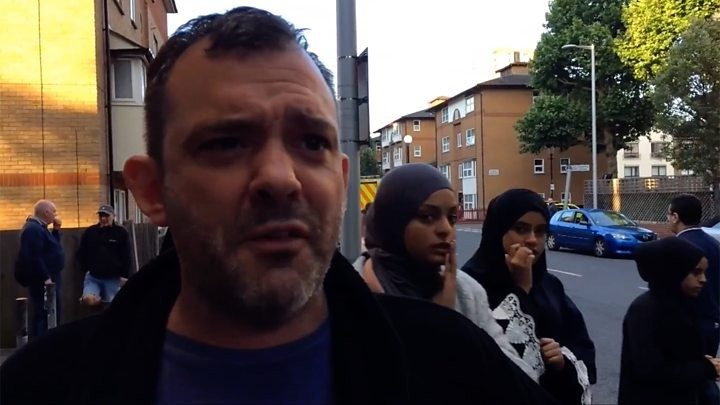 Twelve people have died in a west London tower block fire and the number of deaths is expected to rise, police have said.

Firefighters rescued 65 people from Grenfell Tower in north Kensington, after they were called at 00:54 BST.

Witnesses said people were trapped in the tower block, and that some jumped from windows in an effort to escape.

Theresa May said there would be a full investigation and “if there are any lessons to be learned they will be”.

It is understood that “several hundred” people would have been in the block when the fire broke out, most of them sleeping.

The tower had around 120 flats. The cause of the fire remains unknown.

The ambulance service said 68 patients were taken to six hospitals across London, with 18 in critical care. A further 10 patients made their own way to hospital.

But many more people are unaccounted for, and loved ones have appealed on social media for information.

Eyewitnesses said they saw lights – thought to be mobile phones or torches – flashing at the top of the block of flats.

Trapped residents came to their windows – some holding children. One witness said a baby was caught by a member of the public after being dropped from the tower block.

Commander Stuart Cundy, of the Metropolitan Police, said: “Sadly I can confirm that there are now 12 people that have died that we know of.

“I do anticipate that the number of fatalities will sadly increase beyond those 12.”

London Fire Brigade Assistant Commissioner, Steve Apter, said there were “still pockets of fire yet to be extinguished in places particularly difficult to reach” but “almost all” of the building had been searched.

Checks have been carried out on the building and it is not in danger of collapsing, London Fire Brigade said.

Paul Munakr, who lives on the seventh floor, managed to escape.

“As I was going down the stairs, there were firefighters, truly amazing firefighters, that were actually going upstairs, to the fire, trying to get as many people out the building as possible,” he told the BBC.

He said he was alerted to the fire not by fire alarms but by people on the street below, shouting “don’t jump, don’t jump”.

Eyewitness Jody Martin said: “I watched one person falling out, I watched another woman holding her baby out the window… hearing screams.

“I was yelling at everyone to get down and they were saying ‘We can’t leave our apartments, the smoke is too bad on the corridors’.”

Michael Paramasivan, who lives on the seventh floor with his girlfriend and young daughter, said he ignored official advice to stay in your home.

“If we had stayed in that flat, we would’ve perished. My gut instinct told me just to get the girls out. I wrapped the little one up because of the smoke and I just got them out.”

Another resident, Zoe, who lives on the fourth floor, said she was woken by a neighbour banging on her door.

“The whole landing was thick with smoke. The smoke alarms weren’t going off but the way it spread so quickly from the fourth floor, all the way up to the 23rd floor was scary.”

The Royal Borough of Kensington and Chelsea council said it had placed 44 households so far in emergency accommodation.

For those unable to return to their homes, a rest centre has been set up at Westway Sports Centre, a statement said, and residents affected should call 020 7361 3008.

Grenfell Tower underwent an £8.6m refurbishment as part of a wider transformation of the estate, that was completed in May last year.

The 24-storey tower is managed by the Kensington and Chelsea Tenant Management Organisation on behalf of the council.

Before and during the refurbishment, the local Grenfell Action Group claimed that the block constituted a fire risk and residents warned that site access for emergency vehicles was “severely restricted”.

Policing and fire minister Nick Hurd said checks were now planned on tower blocks that have gone through similar refurbishment.

He said authorities discussed “a process whereby we seek to identify towers that might be in a similar process of refurbishment (and) run a system of checks and inspections”.

Construction firm Rydon, which carried out the refurbishment, said it was “shocked to hear of the devastating fire”.

It originally stated that the work “met all required building control, fire regulation and health and safety standards”.

It later issued a new statement, removing the previous mention of the building meeting fire regulation standards, instead saying the project met “all required building regulations”.

In a statement, Kensington and Chelsea Tenant Management Organisation, said it was “too early to speculate what caused the fire and contributed to its spread”.

Council leader Nick Paget-Brown said the buildings were regularly inspected, but a “thorough investigation” was needed.

The prime minister has promised a “proper investigation” into the fire.

But Labour politicians are calling for answers from the government. Labour leader Jeremy Corbyn said: “We need to know what reports were available, what information was given and what actions were taken.”

A review of building regulations covering fire safety was promised by Prime Minister Theresa May’s chief of staff, Gavin Barwell, last year, when he was a government minister, but has not been published.

Responding to earlier reports, the Department for Communities and Local Government said it was “simply not true” that a report has been “sat on”.

Following the Lakanal House fire in south London in 2009, in which six people died, the coroner recommended the guidance relating to fire safety within the Building Regulations was simplified.

The government said this work was “ongoing”.

The government also wrote to councils encouraging them to consider retro-fitting sprinklers, as recommended by the coroner, a statement said.