LeBron James dismisses notion Kevin Durant is wearing him down 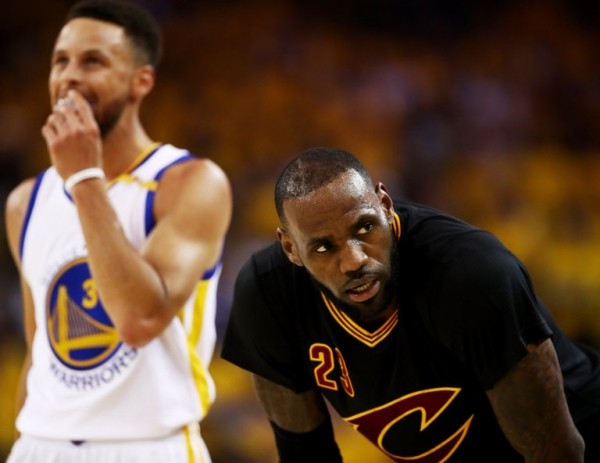 After the warp-speed Golden State Warriors overran the Cleveland Cavaliers in the first two games of the NBA Finals, with Durant averaging 35.5 points in the wins, one of the trending topics has been whether James is being worn down in trying guard the 7-footer.

“Do I look tired?” James asked at Wednesday’s morning shootaround in advance of Game 3. “I’m averaging a triple-double in the Finals. I’m pretty good, I would think.”

Playing in his seventh straight Finals, James is averaging 28.5 points, 13 rebounds and 11 assists but it hasn’t been enough for the Cavs, who lost Games 1 and 2 by a combined 41 points.

Cleveland was in a very similar spot a year ago, when the Cavs lost the first two games by 48 points, won Game 3 and then overcame a 3-1 deficit to win their first title.

In addition to all he does on offense, James has also been assigned to cover Durant. It’s unlikely Cavs coach Tyronn Lue will change the matchup at the start of Game 3, but he did use guard Iman Shumpert on Durant for portions of Game 2.

According to ESPN’s research, the first two games of the series were played at a faster pace – possessions per minutes – than any of James’ previous 212 playoff games. The three-time champion stopped driving to the basket in the second half of Game 2 and he looked spent on the bench when he took a break during the third quarter.

The Warriors are a perfect 14-0 so far in the postseason, and they seem intent on revenge after giving up a 3-1 lead to the Cavs in last year’s Finals.

James, however, also rejected any notion that the Warriors are any hungrier than he and his teammates.

“I want to win just as bad as they do and obviously they probably got a bad taste in their mouth after what happened last year and we had one in our mouth last year from what happened the year before,” James said. “I’ve had a few bad tastes in my mouth from what happened in the Finals, so and I’ve always had that feeling so it never changed for me.”