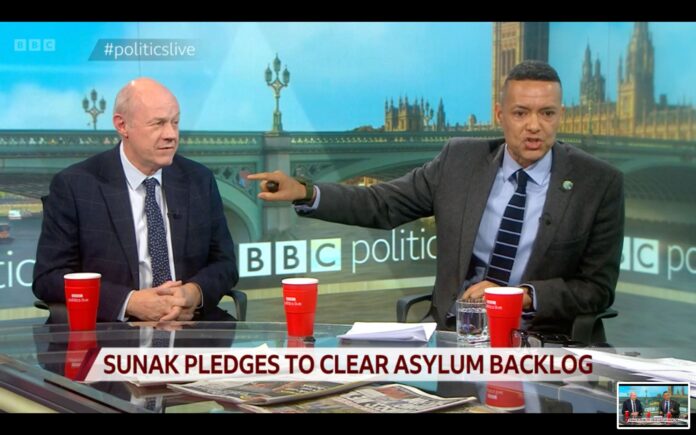 By Terry Paul
December 14, 2022
A Labour MP has likened the UK government’s plan to house migrants in holiday parks to “concentration camps”.

Clive Lewis compared Rishi Sunak’s plan to tackle the migrant crisis to the Boer War – in which thousands died in concentration camps.

However, the MP for Norwich South sparked a backlash from other members on the BBC Politics Live panel including Tory MP Damian Green who told him that was “nonsense”.

The government has vowed to turn disused and off-season holiday parks into accommodation for Channel migrants in an attempt to reduce the £5.6 million a day being spent on hotels.

Lewis made the comments when asked about the i Paper’s headline which said: “Pontins revolt: Tory backlash at plan to house migrants in holiday camps.”

The Labour backbencher said: “I’m looking at that headline…let’s be really clear here my understanding is if you put a group of people concentrated into a camp – as you did in South Africa in the Boer War – it’s what you call a concentration camp.

“It’s a concentration of people. Look what they’re talking about – putting people in camps en masse because of their [the Tory Party’s] mess.

“Let’s just be really clear about what we are – that is the technical term.”

Lewis hit back: “Language is important but so is motivation and what this government is doing.”

Green, the Tory MP for Ashford, told him: “Every bit of that is nonsense. So is the i headline that there’s going to be a huge revolt overtaking people out of hotels and putting them in whether it’s holiday camps or former student accommodation? That’s just not true.”

A Labour spokesman said Lewis’s comments were “clearly not appropriate” and any disciplinary action will be decided by the whips.

It comes amid a rescue mission in the English Channel after a small boat, with migrants on board, got into difficulty at sea.

Four people have so far been reported dead, with 43 people apparently saved by authorities.

Only the day before Sunak had said “enough is enough” as he unveiled a raft of new measures to curb Channel crossings and tackle the backlog of asylum claims.

The prime minister told the Commons “unless we act now and decisively, this will only get worse” as he set out a five-point plan in a bid to grip the migrant crisis.

Labour leader Sir Keir Starmer dismissed the proposals as “unworkable gimmicks”, instead arguing that his party would offer “serious solutions”.

The latest home office figures show there were more than 143,000 asylum seekers waiting for a decision on their claims, in the year to September while nearly 100,000 had been waiting more than six months.